An American Patriot Wants YOU to VOTE
Votes

An American Patriot Wants YOU to VOTE

Local Vietnam Vet is a strong proponent of voting as a duty. 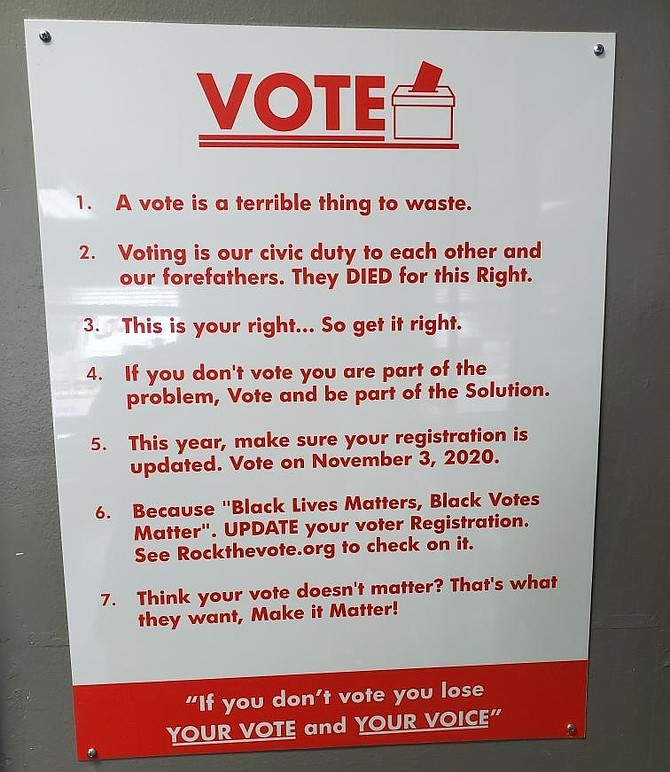 Jim Moore placed the sign in a prominent position in his shop, near his wall of mementos of the eras of change the shop has lived through. Photo by Eden Brown. 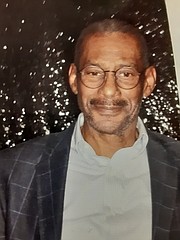 Soupy Tyler in a photo from last December. He has been an Alexandria resident for a while now, but has lived in Hall’s Hill and Green Valley in Arlington previously.

”Soupy” (John) Tyler walked into Jim Moore’s barber last July and asked him if he’d be willing to make up a sign about voting, something that would inspire people to get out and vote, and he’d be glad to cover the costs.

“Well,” Soupy Tyler said, “It’s the anniversary of the Million Man March — I’m not really an activist but I was there for the first march. It brought to my attention how important it is to vote. That was an important point in history. And now we’ve come to a point where we are marching again and it’s even more important to vote. I’m grateful I was born in this country, the United States of America,” Tyler continued. “But we could never be the greatest country in the world as long as we were racist. “

Soupy has been going to Moore’s barber shop since he was a kid growing up in what was then segregated Arlington. He knew it was a gathering point for a lot of Arlington Black people, and a kind of “Village Green” for many generations. He wanted to make sure the people in the community were aware how important their vote was, particularly this year. He didn’t care what the poster said, he didn’t want it to be partisan: he just wanted folks to remember how the vote wasn’t given to them. They fought for it.

Tyler heard some of the young people who saw his sign in the barber shop said they weren’t going to vote because it wouldn’t make a difference. “In my family, I am well known for telling the young people they HAVE to vote. Me? I already voted. I got up at 6 a.m. in case there was a long line. I stay pretty close to home now to avoid the virus. I went down to Royal Street in Alexandria to vote and got a cup of coffee, thinking to wait and just sit on my golf chair, but there wasn’t a line and it was easy to get in and out. “

“I always thought the most important part of the Constitution was the part that said ‘We the People.’ That means us: we have to work at making things better.”

Tyler graduated from Washington-Lee High School in the 60s and was drafted into the U.S. Army in 1968 and shipped out to Vietnam. “I did 16 months, and 22 days in Vietnam with the Ninth Infantry Division. I was there right after the TET offensive and my unit moved around a lot, but I was in the Mekong Delta mostly. It was funny, I’d be walking down the street in Saigon or someplace and run into guys from my neighborhood (Hall’s Hill). These were guys I went to school with or played ball with, and there we are, thousands of miles from home running into each other.”

“I guess VIetnam was a lot of things, some bad, some good: for me it was the greatest adventure of my life, a real eye opener. It was the first time I ever looked at America from a distance. You hear the conversations of foreigners and the ideas other people have about America and Americans. It’s a different perspective. After I got out of the service I worked for the Post Office, then the Department of Defense where I was for 37 years. I did some security work too.”

“But America isn’t what it should be right now. This Supreme Court imbalance, that’s wrong. But the major thing that needs to be changed, well, I always thought the most important part of the Constitution is ‘We the People’ but then you hear people saying they can’t change anything, or they don’t want to educate themselves on the issues or speak up. People say, ‘What can I do to change things? Nothing!’ But that sentence that starts ‘We the People’ doesn’t mean you let someone else do the work. I believe you have it within your power to change things, to take the first step by voting. You have to work at making things better. it won’t just happen on its own.”