Oakton teen defers college and sets off across America. 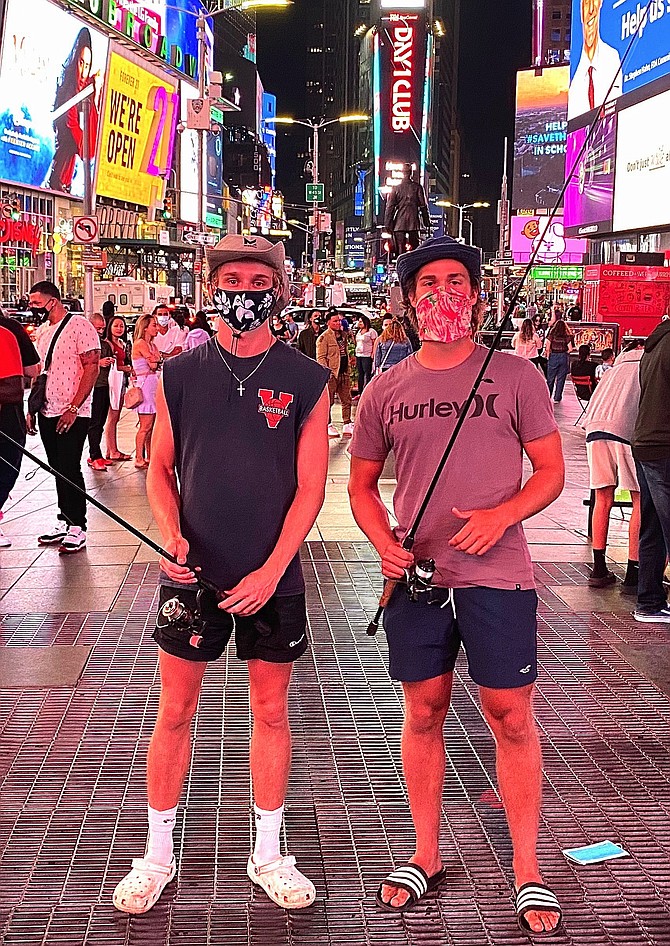 (From left) Daniel Balserak and Luke Konson in Times Square with their rods. They stopped on their way to Rhode Island. Photo contributed

First in a series showcasing the stories of Fairfax County families in the time of distance learning as they develop strategies and alternative learning plans best suited to their needs. 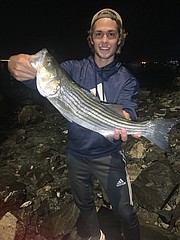 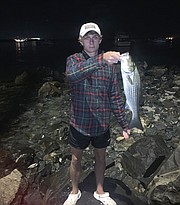 Luke Konson, 18, of Oakton is on a journey of a lifetime. He traded computer screens and online learning for the great outdoors and fishing rod lines. Konson’s goal is to visit each of the 50 states in America and catch and release their state fish. Konson said that he believes he will be the first person to do so and plans to complete his goal during the 2020-21 academic year. Konson’s father, Mickey Konson, taught him to fish at age two and sportfishing remains his lifelong love.

This spring, as a senior in high school, Konson felt frustrated and challenged with online instruction. "It was hard to focus, hard to stay in rhythm (and) hard to absorb all the material," he said. Konson's mother, Michelle, said that her son finished his senior year at the dining room table on his computer. "Luke is social and thrives on being with people. Isolation was very difficult for him mentally and emotionally," she said.

AFTER GRADUATING from Dominion Christian School based in Oakton, at the Upper School Reston Campus, Konson put those three months behind him. He set his sights to in-person learning and the college experience as a rising freshman at Clemson University in South Carolina. However, on July 22, the university president announced the fall semester would begin online on Aug. 19, in-person classes delayed to Sept. 21.

Disappointed and aware the COVID situation could force the university to extend online learning, Konson, with his family's help, considered alternatives. "We had some really frank discussions," said Michelle Konson. "Luke loves sports, he loves people. Sitting at computers is not his most chosen activity...He was ready to go and couldn't stay home any longer...It became clear, even if he got a job, he would still be at home. That's not what he wanted or needed at this point."

Konson said, "It's hard being all geared up to go and leave home in two weeks, and then all of a sudden you're told that you can't." Konson deferred his Clemson enrollment for a year and, with it, lost his scholarship. Next, Konson considered how he could make the most of his time and not waste it. He focused on travel. "That was definitely at the top of my list...There's just so much to see, and there's so little time to see it all," he said. Needing a purpose to travel, Konson turned to the same sport his father taught him and the one he turned to during COVID-19: fishing.

Needing to self-fund the trip, Konson stood up a GoFundMe campaign of $3,000, Fundraiser by Luke Konson: Catching the State Fish in Each State. It, along with his savings, would finance his journey through the spring of 2021. On his GoFundMe page, Konson wrote: "I will need to keep my gas tank full, purchase fishing licenses for each state, eat a couple of meals a day... Licenses will cost me approximately one thousand dollars, and the other expenses approximately $3,000."

FOUR WEEKS AFTER learning Clemson would begin virtually, on Aug. 22, Konson left Virginia with finances controlled and a route prepared according to his mother. With his friend, Daniel Balserak of Oakton, who also deferred enrollment to Clemson, by his side for the first leg of the nearly nine-month journey, Konson set off to the upper northeast, Maryland – striped bass, New Jersey – brook trout and New Hampshire – striped bass. Then onto Sebago Lake, Maine for the landlocked salmon, a subspecies of the Atlantic salmon. "There have definitely been challenges, but we're doing OK,” said Konson.

After Konson’s son left, she said it had never been on her list to send her 18-year-old son around the country fishing. "He's learning to figure out life….the value of a dollar, how to be flexible and change plans."