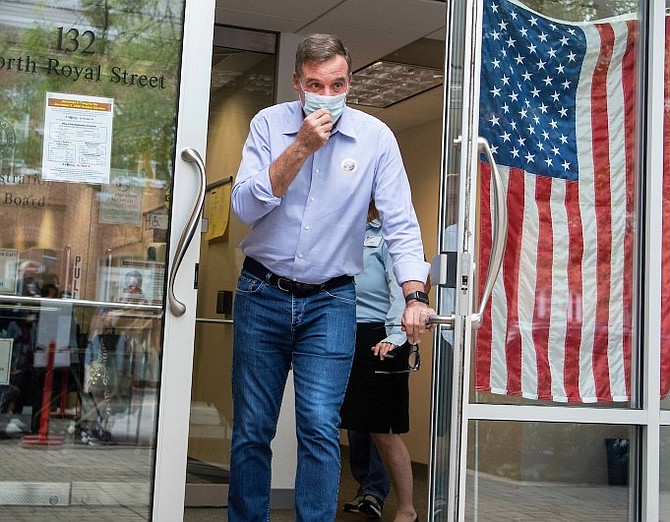 Voters across the state braved long lines and wait times in some places of several hours as early voting began Sept. 18 for the upcoming Nov. 3 general election.

“I just exercised my constitutional right,” Warner said after casting his ballot at the Alexandria Voter Registrar’s Office on North Royal Street. “And I strongly encourage all Virginians to take advantage of our new rules where you can vote early.”

Early voting opened across the state Sept. 18 and runs through Oct. 31. Alexandria voters can vote early Monday through Saturday from 8 a.m.-5 p.m. at the Voter Registrar’s Office at 132 N. Royal St. with satellite polling places opening in October.

“Our first batch of 31,057 absentee ballots went out over the weekend.”

“The Beatley Library will open for early voting Monday through Saturday from Oct. 23 through the Oct. 31 deadline,” said Alexandria Registrar of Voters Angela Turner. “Minnie Howard and George Washington Middle Schools will be open Oct. 24 and 31 for Saturday early voting.”

In addition to in-person early voting, voters may request an absentee ballot to vote by mail or for drop-off at a local polling station during early voting hours.

“Our first batch of 31,057 absentee ballots went out over the weekend,” Turner said. “About 1,000 more ballots have gone out since then.”

“By 8 a.m. we had a line but we moved through it quickly,” Turner said. “We maintained a bit of a line all day – about a 15-minute wait – but we were able to get voters through pretty consistently.”

Absentee ballots can be requested by mail or online at vote.elections.virginia.gov. A paper application can be downloaded from the absentee page at https://www.alexandriava.gov/Elections. The deadline to vote in-person absentee is 5 p.m. Oct. 31. Voters no longer need to give any reason to vote early.

“If you are for me or against me, get out and have your voices heard.”

For those not registered to vote at their current address, the deadline to update that information is Oct. 13 at 5 p.m. Registration applications received after that date will be processed after the election. To submit or update registration information online, visit through the Virginia Department of Elections at https://vote.elections.virginia.gov/VoterInformation. Any eligible U.S. citizen who will be 18 years old by Nov. 3, 2020, is eligible to register.

To check your registration status and find your polling place, visit https://vote.elections.virginia.gov/VoterInformation, or call the Alexandria Voter Registration Office at 703-746-4050.

As of Tuesday, 2,725 Alexandria voters had cast ballots during early voting.

“Election Day is a state holiday this year,” Warner said. “This is the most important election of our lifetime. If you are for me or against me, get out and have your voices heard.”