Pastor at Rising Hope To Retire

At the Rising Hope Mission Church, Rev. Dr. Keary Kincannon has been a moving force since the beginning when it was run out of the trunk of his car 26 years ago. Now at age 72, Kincannon is retiring but not without leaving behind a legacy in the Mount Vernon community where he has 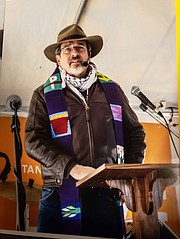 helped many get back on their feet.

The church is devoted to serving the needy of the Route 1 Corridor according to Kincannon, the founding pastor. Thousands of people a year are aided by Rising Hope’s food pantry, soup kitchen, clothing closet, hypothermia shelter, recovery programs, job search and emergency resources.

“We are a place where people that don’t fit in, fit in,” Kincannon said. “I’m enthusiastic about what we’ve done,” he added, but retiring is part of the grand plan too. He has reached retirement age, and “it’s time,” he said.

In addition to the trunk of Kincannon’s car, Rising Hope UMC has been in seven different buildings before finally being able to purchase the building where they are located now. The church relies on donations almost entirely, and the residents and businesses along the Hybla Valley-Mount Vernon corridor have been generous.

Rising Hope is “unconditionally welcoming to people,” Kincannon said, and he’s visited homeless camps and knocked on doors to let people know where they can turn when they need help. “If we were not there, we would be missed,” he said.

Supervisor Dan Storck (D-Mount Vernon) worked with Keary often, and appreciated the way he was always fighting for and sharing God’s love with the diverse community in that area. "He strongly believes we should all do more to support everyone," Storck said. Storck will miss his day-to-day interactions at Rising Hope. "However, I am equally certain he will remain a driving force in our community," Storck said.

Many of the people that were helped through Rising Hope came back to volunteer there, dishing out food or soup to others so they can get back on their feet. There are as many stories as there are people that come through the doors, and Kincannon gets involved with most of them.

Kincannon and a group of parishioners travel to Richmond.

“Here at Rising Hope,” Kincannon told the Mount Vernon Gazette in 2012, “we reach out to people who are struggling with all kinds of addictions, all kinds of issues, their lives broken in many different ways. What we are about is empowering people to live life to the fullest, to experience the abundant life that Jesus Christ came to bring.”

He remembers a woman named Karen who was a crack addict, and she ended up in prison, but once she was released she found a job and started living in a motel near Rising Hope. She started volunteering at the church and they found out she used to run karaoke nights years before, so they got her to maintain the sound system in the church. Then she landed a job at a recycling corporation, and was up for a management position before the recycling company was taken over by another company, and they got word that Karen had been arrested in the past, and wouldn’t keep her employed. She showed interest in the trucking industry, so Rising Hope put her through a trucking school, and she became a big rig driver. “Now she owns her own rig and is doing very, very well,” said Kincannon. “That’s just one story of many,” he said.

Kincannon’s last day is June 30, but he will stay in the area where he’s made his home. His successor is Pastor Cameron Wilds, a 33-year-old that has been in training for the last few weeks.

The deeper mission at Rising Hope is about the spiritual self, and Kincannon feels they’ve done a good job getting people in touch with that.

“We’re really about accepting,” he said.