ArPets: Cuter by the Dozens – 25 Dogs and Counting
Votes

ArPets: Cuter by the Dozens – 25 Dogs and Counting 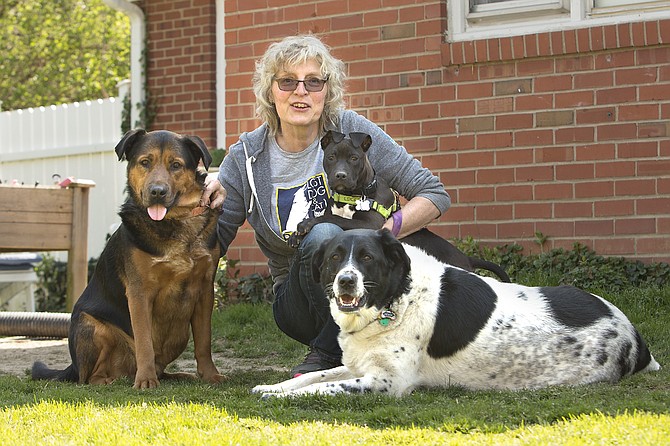 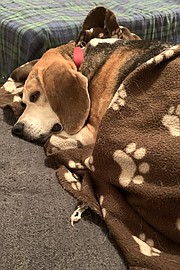 Barney the beagle after his evening tuck-in as a foster with Johanna. 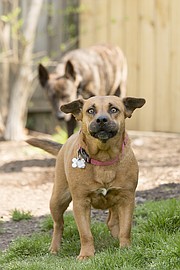 It took a long lens to get close to Indy. Dazzle, in the background, alternated between hiding behind the other canines and the trees for most of my visit.

I couldn't wait to vault from my parents' house into college. Full disclosure: my college was less than 75 miles from my childhood home and about a 12-minute drive from two sets of aunts and uncles. So, first step toward independence, sure. But a huge step, not so much.

Never would I have moved to a foreign country without my family at 18. But that's exactly what Johanna Pichlkostner Isani did, leaving her small town in Germany for an adventure as an au pair in Northern Virginia.

I can only imagine what it was like for Johanna (pronounced Yohanna) to arrive here amidst the 1976 bicentennial celebrations. Her first day was filled with parades. And her first night was punctuated by loud and colorful fireworks. "What a welcome to the country," she told me.

Truly settling in meant turning the English grammar and spelling she had learned in school, into fluid conversation. TV became a tool to improve her skills, but she says it was definitely not a fast process. Johanna quickly came to appreciate the perfect placement of Northern Virginia with its short distances from the ocean, mountains, cities and countryside. And she loved having access to so many wonderful museums. Northern Virginia became home and ultimately she settled and raised her family in Alexandria; three sons, a couple of cats and a dog.

We were introduced by a mutual friend who couldn't say enough about Johanna's impact on the success of the 25 foster dogs for whom Johanna's home has been a much-needed way station.

Johanna grew up with a dog and cat, as well as two "boy" hamsters who had a litter. Then another. Then another. And over time, there wasn't a kid in her neighborhood who didn't have one of the Pichlkostner hamsters. Perhaps this was early preparation for the fostering and dog placement that she does so successfully now.

Over the years, Johanna adopted two dogs from the Lost Dog and Cat Rescue Foundation (LDCRF) and so it made sense for her to look there when she decided she wanted to explore opportunities to get involved with animal rescue. A volunteer since 2019, Johanna could not be happier with her choice to become part of the LDCRF family, "By joining LDCRF I found a welcoming organization with an awesome group of people, all focused on doing good for the animals in their care."

Johanna and I have been emailing back and forth for more than a month now. And when I see her email address pop up in my inbox, I fix myself a cup of coffee and imagine there is no pandemic and we are sitting across the table at a local coffee shop as I read about her many fosters.

As a rescue beagle pet-mom, I was especially touched to learn Barney's story, which has been edited for length and clarity.

"I took in Barney the beagle in June of last year. This scared boy would scamper to the very back of his kennel when anyone came to see him. [After he came home with me,] the first few days he kept his distance, giving me a wide berth when coming in or going out to the backyard. [He would] give me his famous side eye and bolt if I tried to come too close. He was in a pretty bad condition with inflamed skin, patches of fur missing, fur that felt oily and sticky when touched, some dead ticks still falling off him and giving off a terrible smell – just a mess.

I was surprised by how quickly he was ok with me sitting next to him and giving him a chest rub and how fast he became comfortable just being in the living room with the other dogs and myself. He was with me for 6 months and made daily progress... After a few months he would snuggle on my shoulder and wait for me to tuck him in with a blanket at night...This boy went through numerous medical appointments and procedures and was such a trouper, accepting all treatments, medications and cones he had to wear. He could teach many lessons about overcoming fears, accepting challenges and just going with the flow, happily doing his own thing and finding joy in small things (getting the cone off for a bit and rolling in the grass, lazing in the sun or by the big window). His adjustment, progress, resilience and attitude surprised me on a regular basis.

Since he was so terrified by new people, I was really worried about finding his family. [But then] his forever family, where he was supposed to be, was found."

“Barney was in bad shape when Johanna swooped in and became an angel in his life,” says adoptive mom Margaret Moral. “We are uncertain what he experienced in his past but it was traumatic enough for him to be extremely skittish and terrified. We knew immediately that we would have to work to win this poor boy’s trust and affection the way Johanna had undoubtedly done. She was upfront and honest about Barney’s medical history and anxieties and we were up for the challenge. We still communicate with her 4+ months after his adoption and send pictures and videos. It is because of her that this sweet beagle has a new lease on life. To say that we are grateful for her is an understatement.”

Every foster has a story and this particular one is ongoing. I was lucky enough to get to meet Indy. She never came over to me. But seemed to accept me as a new friend who could share her yard, as long as I stayed on my side. Indy is not yet ready for adoption, but Johanna has high hopes that she will eventually get there. Indy's story too has been edited for length and clarity.

"Indy arrived [at the rescue] in June. ...There were only a few people who could go in her kennel and quietly sit with her, as she was terrified. I took her home in January, transporting her in a crate and carrying her into the backyard in the crate. It was amazing to watch how gentle [my other dogs] Lexie and Paxton were in their approach to her, giving her time to slowly come out of the crate and carefully check out the yard. I had her on a long leash so I was able to bring her into the house where a big kennel was set up for her. She went in it immediately, but by the end of that first day she was on a pillow in front of the crate watching us, and the next day she stayed in the living room with the other dogs on her dog bed.

Every time I got up to move or walked through the room, she bolted out of the way and never totally relaxed when sleeping, always keeping an eye open and reacting to every noise or movement. By the end of January she actually slept while in the living room with us ... After 6 weeks she accepted ear rubs from me and a week later started asking to be pet by barking at me until I put my book down and pet her. I do have to continue to be sitting or crouched down. This spunky girl is working so hard on overcoming her fears and while we still have quite a way to go and have regular set-backs, I am so proud of how far she has come with a calm approach and consistency in a safe setting that lets her make the choice of what is ok and what she cannot do yet."

For a while now, it's been just Johanna's two adopted dogs: Lexie and Paxton and two fosters; the aforementioned Indy as well as Dazzle, who has a long way to go to feel comfortable around Johanna and the other dogs. Johanna is hopeful that over time, Dazzle's previous life will fade and the new happy memories they are creating together will help him overcome his dark thoughts and fears.

Johanna was quick to step up recently when months old little Bri needed a short-term place to stay. Bri is Johanna's 25th foster. It's been a while since she's had a puppy at home and she had definitely forgotten about the boundless energy, middle of the night bathroom trips and sharp teeth that enjoy chewing on fingers and shoelaces alike. But Bri is sweeter than sweet and is doing nicely in Johanna’s household. If you are looking to adopt a little cutie, the simply adorable Bri will be available for adoption in the coming weeks. You can watch for her on the Lost Dog and Cat Rescue Foundation website. https://www.lostdogrescue.org/

The party of five definitely keeps Johanna on her toes. And she clearly loves every minute of her time as a foster pet parent.

"[Being a canine foster parent] is such a rewarding experience for me, taking in a scared or stressed dog or one recovering from an illness and providing a safe and quiet place. Watching the change that happens when they realize they are safe and slowly begin to trust, realizing that a hand reaching out is to pet and give belly rubs and treats... It is a different experience every day, providing daily joy, laughter as well as stress relief."

You can check out opportunities to foster and adopt on the Lost Dog and Cat Rescue Foundation website. https://www.lostdogrescue.org/

And, here are a few additional local rescue organizations who might be able to help you find your perfect match: