An Avian Drama Is Underway
Votes

An Avian Drama Is Underway 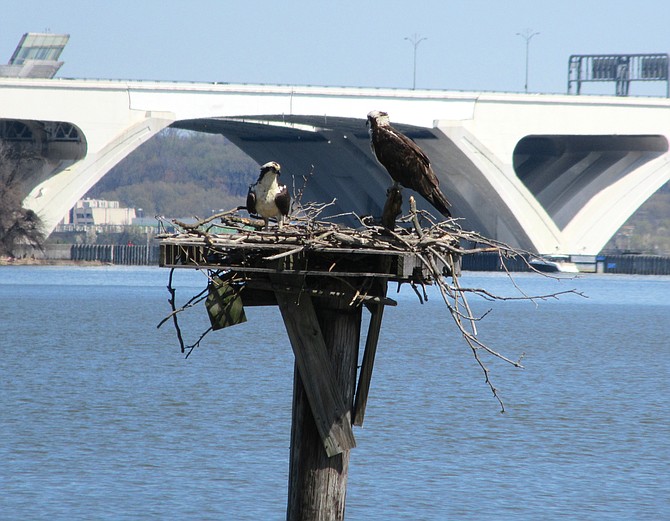 An osprey pair returns to this platform at the Belle Haven Marina every spring, just south of the Woodrow Wilson Bridge. Photo by Glenda Booth

An osprey pair is rebuilding a nest on a light pole at Whitman Middle School. A school contractor removed last year's nest this past winter.

Osprey chick about a week from leaving the nest.

Ospreys can clean their talons by dragging them in the water.

Osprey with its catch.

Most likely, Fort Hunt Softball League players at Whitman Middle School and youngsters romping on the Martin Luther King Park playground nearby don’t notice the romance going on overhead. High up on light poles, ospreys are refurbishing last year’s nest and they will soon be raising their young.

Every March, ospreys return to Northern Virginia from their southern wintering grounds in Florida, the Caribbean and Central and South America. They may fly 160,000 migration miles in their lifetime.

These chestnut brown and white raptors mate for life and return to the same nest every spring. Historically, they chose trees for nest sites, but today 90 percent of osprey nests are on manmade structures, reports Dr. Bryan Watts, Director of William and Mary College’s Center for Conservation Biology. They nest near water on light poles, platforms, channel markers, barges and waterfowl blinds. One year, a pair built a nest on a Belle Haven Marina sailboat, stymying the vessel until late summer.

Since they add materials year after year, a nest can be ten to 13 feet deep, three to six feet across and weigh up to 250 pounds. To humans, the nests can look like unkempt jumbles of sticks lined with grasses, sod, vines and miscellany. People have found bottles, shoes, cans, fabric, fast food debris and even a Barbie doll in osprey nests. Some items, like plastic bags, balloon ribbons and monofilament fishing line, can present dangers if the birds become entangled or choke on them.

Known as “fish hawks,” ospreys are proficient anglers. The average time spent hunting before making a catch is 12 minutes, say Cornell University’s Lab of Ornithology experts. They hover, scan the water and plunge feet first onto a fish. With powerful talons, an opposable toe that can face forward or backward and barbed foot pads, they can grip slippery fish and tear them apart with their strong, curved beak.

Ospreys always fly with the clutched fish’s head forward, an aerodynamically favorable position that reduces wind resistance. They take their prey to a tree limb where they perch and eviscerate it or take it to its mate and young in the nest.

Ospreys typically incubate one to four eggs for 36 to 42 days. Nestlings start as helpless fluff balls but in eight weeks, they fatten up and usually fledge soon after July 4th. In late summer, young and old head south. Next spring, the ritual will resume.

Dyke Marsh has had as many as 11 osprey nests in some years. It is too early to determine nest numbers this year and local observers say the birds seemed to have arrived later than usual. In addition to Dyke Marsh, you can see ospreys along the Potomac, on Little Hunting Creek and at Mason Neck and the Occoquan Bay National Wildlife Refuge.

In the early 1970s, scientists concluded that the eggshells of ospreys, eagles and other birds were so thin that they broke during incubation and birds failed to hatch. They linked the hatching failure to pesticides that moved up the food chain. Numbers plummeted. The U.S. Environmental Protection Agency banned DDT and populations have rebounded.

A mature bald eagle has a pure white head and tail. Ospreys also have a white head and a distinctive brown stripe through the eye. Osprey nests are often quite visible. Bald eagle nests are usually high in trees and away from human activity. Bald eagles have a wingspan of over 85 inches; ospreys, around 70 inches.