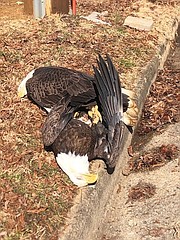 Two bald eagles were found dead in Mount Vernon last week. “The eagles’ talons were locked together and one of the bird’s tail feathers appeared to be burned,” according to Katherine Edwards, Wildlife Management Specialist with FCPD.

Several Mount Vernon area residents happened upon two dead bald eagles in the grass near a utility pole in the 7600 block of Elba Road on Feb. 17. ”I walked by right after this happened,” said Pam Williams. “It was a horrendous sight.”

“The eagles’ talons were locked together and one of the bird’s tail feathers appeared to be burned,” according to Katherine Edwards, Fairfax County’s Wildlife Management Specialist with the Police Department, whose animal protection officers were called to the scene. Edwards also said that a neighbor thought she heard a transformer blowing up shortly before the eagles were found. Edwards speculated that the eagles died by colliding with a power line while interlocked during what’s called “a talon-grappling display.”

There are several reasons bald eagles engage in talon grappling, says the American Bald Eagle Foundation’s website, but human explanations of bird behavior are always risky, experts caution. It can occur between mated adults, unpaired adults, adult and immature eagles and immatures with immatures. Interlocking talons could be pair-bonding, aggression or play.

The Elba Road bald eagles were adult birds. Mature bald eagles have a white head and tail and dark brown body. Immatures, those under five years old, are mottled brown. (Mature golden eagles are dark brown with slightly lighter flight feathers and a golden nape. They are rare in northern Virginia, more likely seen in the Appalachian Mountains in the winter.)

Bald eagles typically mate for life. In the winter, they select a breeding territory and often return to their previous year’s nest. In Northern Virginia, in February, bald eagles typically are mating and incubating eggs. In 2020, the Dyke Marsh Wildlife Preserve had three active bald eagle nests. Fort Belvoir and Mason Neck also have had paired, nesting bald eagles for many years.

As for what this pair was doing, Edwards offers this possibility: “During the winter months, bald eagles are busy with activities associated with their breeding season, such as courtship or pair bonding with mates, establishing territories and building nests. Eagles will aggressively defend their territories from intruders. They are known to engage in talon-grappling and tumbling displays (also known as “talon-clasping” or “cartwheel displays”) that are thought to be involved with either territorial defense or courtship.

“Although finding a pair of bald eagles with interlocked talons is certainly surprising and rarely observed, it is not an uncommon occurrence during eagles’ breeding season. Both male and female bald eagles may engage in locking their talons together in dramatic flight displays, whirling through the air and plummeting toward the ground. Bald eagles will usually let go and separate before landfall; however, there are unfortunate instances where eagles may collide with other objects, such as trees or power lines or hit the ground before separating and may be killed in the process,” Edwards offered.

Two federal laws, the Bald and Golden Eagle Act and the Migratory Bird Treaty Act, generally prohibit anyone from taking, possessing or transporting a bald eagle or golden eagle or their parts, nests or eggs without prior authorization from the U.S. Fish and Wildlife Service (FWS). Recognizing the religious and cultural significance of eagles to Native Americans, the law does allow enrolled members of federally-recognized tribes to receive and possess eagle feathers and parts. FWS operates the National Eagle Repository in Commerce City, Colorado, to receive and provide Native Americans with eagle feathers for religious use.

The Fairfax County officers will send the deceased eagles to the Colorado repository. “Such a sad ending, but easier to bear knowing they have a second chance through a ceremonial function with Native Americans who respect them,” Williams commented.

The bald eagle (Haliaeetus leucocephalus) was once in danger of extinction in the lower 48 states, with only 417 known nesting pairs in 1963. Scientists attributed their decline to DDT and other compounds in pesticides that moved up the food chain and made eggshells so thin that chicks failed to hatch. In 1967, the U.S. Fish and Wildlife Service (FWS) put the bird on the endangered species list which triggered some protection measures. In 1972, Congress banned DDT and eagle population numbers began to climb. In 2007, FWS removed it from the endangered species list because FWS’s website says, “their population is protected, healthy and growing.”