Delfina back home, but support needed for the long recovery 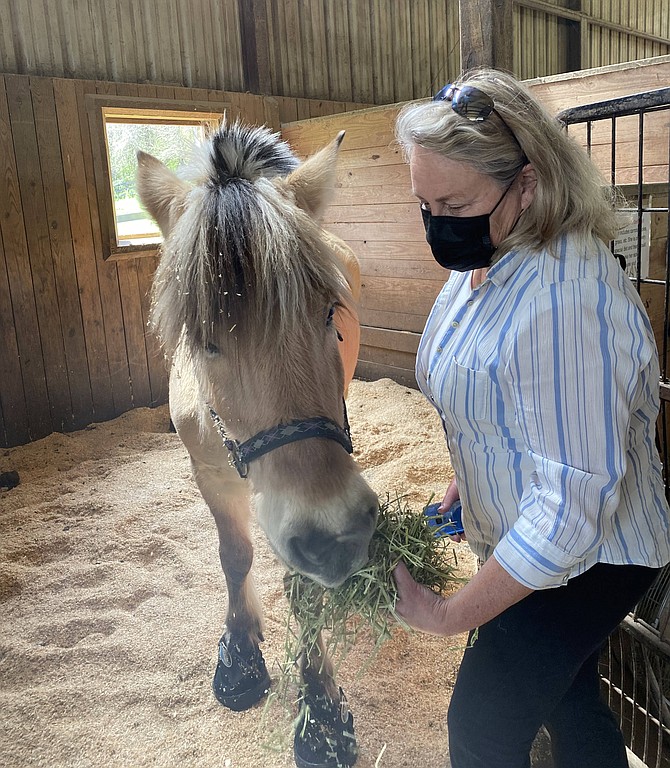 Delfinia, one of Lift Me Up’s most loved horses, is back home after a lengthy and costly stay at the Marion duPont Scott Equine Medical Center. Georgia Bay, Executive Director and Advanced Instructor at Lift Me Up, gives her a bit of hay. Photo by Mercia Hobson. 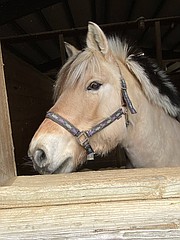 Delfinia keeps her eyes open for a bit more hay.

On April 8, a beloved 18-year-old Norwegian Fjord named Delfinia at the Lift Me Up equestrian center in Great Falls suffered a severe case of colic, abdominal pain. The gentle pony-sized horse, with her distinctive two-tone mane, lay in her stall.

“We knew Delfinia was really sick when she didn’t want to eat. This pony lives to eat,” said Georgia Bay, Executive Director and Advanced Instructor at Lift Me Up. It is a center that offers therapeutic riding and horsemanship programs for children and adults of different abilities. Apparently, painkillers for Delfinia’s chronic laminitis, foot pain built up in her system and hurt her stomach. Bay said colic is critical. “Really bad things can happen to the intestines, where they split or twist,” she said.

Delfinia required emergency transport to the Marion duPont Scott Equine Medical Center in Leesburg. According to Bay, they worried about covering the cost but at the same time didn’t want to lose Delfinia, “We thought we were going to make this work somehow.” Following nine days of treatment, Delfinia returned home to LIft Me Up.

“We’ve put out an appeal and said if you’d like to help with her vet bills, that would be great. We are so humbled by the outpouring of support,” said Bay. She added that LIft Me Up no longer had reserve funds for emergencies due to the pandemic. “We used to, but not right now,” said Bay.

The cost of Delfinia’s treatments, medications, and 24-hour observation and care at the hospital hit $8,000 a little over halfway through her stay and continues to rise with a long road to recovery.

Ongoing support will help Lift Me Up continue to afford Delfinia’s medical bills. To donate, visit the Lift Me Up website.