Conley’s Wish: To Help Horses and Riders at LiftMeUp! in Great Falls
Votes

Conley’s Wish: To Help Horses and Riders at LiftMeUp! in Great Falls

Teenager Conley Rohall donates ‘Make a Wish’ to horses and riders at LiftMeUp! 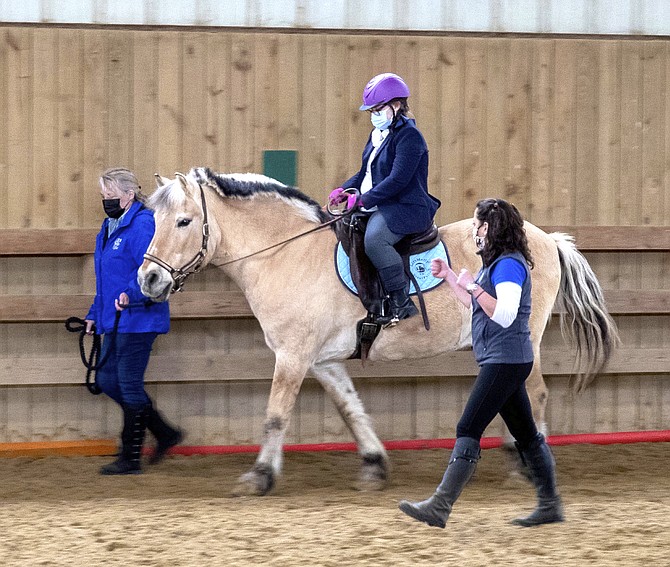 Abigail Dawson is the Director of Communications at Lift Me Up!, a PATH Intl. Premier Accredited Center in Great Falls. Abigail has been riding horses since she was seven years old and enjoys jumping, dressage and trail riding, but has also competed in hunters with her own horse and in equitation with the Earlham College IHSA Equestrian Team. She became a PATH Intl. Certified Instructor in November 2019, and has been working as Barn Manager at Lift Me Up since January 2020. She currently cares for all of Lift Me Up’s equine residents and can be reached at Abigail.Dawson@liftmeup.org.

Conley Rohall, 16, who suffers from multiple medical conditions and disabilities, decided to donate her wish from the Make-A-Wish Foundation to LiftMeUp!, a therapeutic riding and horsemanship program in Great Falls. Knowing how great an impact horses can have on those in need, Conley decided to pay her wish forward to help others in her community at LiftMeUp!

Conley and her twin sister, Nora, suffered from Twin-to-Twin Transfusion Syndrome (TTTS), a rare and potentially life-threatening condition that caused Conley to be born prematurely with Cerebral Palsy, seizures and Chronic Kidney Disease. When she was in end-stage renal failure in 2018, Conley became eligible for the Make-a-Wish program, and she eagerly began planning for her wish—a trip to London where her favorite BBC show “Sherlock” was filmed. In December 2018, Conley was fortunately able to receive a kidney transplant from her mother, Anne, and reservations were made for her special trip to London.

When the COVID pandemic hit, however, Conley’s trip to London was abruptly canceled due to international travel restrictions. Conley was devastated. One day while visiting the horses at LiftMeUp!, Conley saw that the pandemic not only affected her Make-A-Wish plans, but also had an impact on the horses and riders at LMU. Without being able to hold in-person fundraisers or continue lessons for several months during the nationwide shutdowns, the therapeutic riding program was suffering financially, and the barn and horses needed help. Knowing how great an impact LMU’s riding and horsemanship programs have on individuals like herself, Conley decided to donate her wish to LMU to help the horses and other riders in need.

“I just want people to know that it’s a great place. Everybody is very kind, loving and supportive,” Conley tells Great Day Washington, who filmed a news segment on Conley’s Make a Wish donation. Therapeutic riding at Lift Me Up! gave Conley a chance to participate and compete in an activity just like her peers, while helping her to improve her balance, physical strength and self-confidence. While riding at LMU, she developed a special relationship with a Norwegian Fjord pony named Delfinia. Together, they competed in the Therapeutic Riding Association of Virginia’s annual horse show, and came in second place!

During the celebration of Conley’s wish at LMU, Apple Federal Credit Union, where Conley’s parents Anne and Jose have been banking for years, presented Conley with a special gift: covering the cost of her riding lessons for the Spring and Summer sessions.

Conley’s story is a testament to the resiliency and selflessness of individuals and the community during a year that has been difficult for everyone. Despite facing many challenges in her own life, Conley saw a need in her community and felt moved to help. With the encouragement of her instructor Maya Grigorovich-Barsky, her friends at Lift Me Up! and the support of Apple Federal Credit Union, Conley is hoping to be able to compete again next fall.

As of April 16, Delfinia, Conley’s favorite horse at LMU, is in the hospital for colic and laminitis. LMU is currently fundraising to pay for her medical expenses and ongoing treatment. Donations are being accepted at https://liftmeup.org/delfinia.