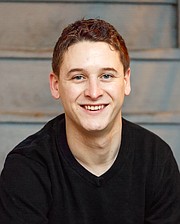 NextStop returns theater to area audiences after more than a year dealing with the consequences of the pandemic. “We are beyond excited to be producing a full-scale production again!” said Evan Hoffmann, artistic director, NextStop Theatre.

“One of the most painful things about the pandemic for artists has been feeling like our ability to create art was almost completely destroyed. Obviously, so many creative workarounds have been developed over the past year,” said Hoffmann. “But for everyone working on this project, actually going back into a real theater, developing characters, and telling a complete story has been so incredible.”

“First Date” is the musical tale of Casey [played by Alex De Bard] and Aaron [played by Taylor Witt], two young singles who are set up on a blind date by friends and family. They might be seeking something that will last, yet they seemingly have little in common. With the influence and unsolicited advice of their friends and family (that the characters play out in their imagination), along with a matchmaking waiter, and, of course, social media at their fingertips, their first date might be right out of the Washington Post’s “Date Lab.” Will there be destiny or doom?

Hoffmann indicated the NextStop production of “First Date” has been reimagined for a film/theater hybrid. It is a production to put “a smile on your face and we all need more of that these days…the show features two people having dinner in a restaurant and having an intimate conversation with someone outside of their bubble’. What could possibly sound more appealing right now!” added Hoffmann.

The NextStop technical team includes Nicole Maneffa in the newly created position as Covid-19 Compliance Officer as well as Charles Belt who is Director of Photography capturing the live staged production on film that will then be streamed virtually.

“Audiences will be able to feel this show through the screen,” said Alex de Bard. “We performers definitely crave a physical audience as much as the audiences crave a live show. We really put our hearts into this one as if there was really a live audience there with us, and viewers will be able to see that. This is the safest and closest thing to a live performance right now.”

NextStop Theatre presents the musical “First Date.” This production is a filmed musical that will be available for streaming virtually, April 30 to May 16, 2021. Fridays and Saturdays at 8 p.m., Sundays at 7 p.m. Tickets: $25 General admission, one per household. For tickets and information, go to https://www.nextstoptheatre.org/. Box Office: 703-481- 5930. “First Date” is Co-Sponsored by Northwest Federal Credit Union & Griffin Owens Insurance