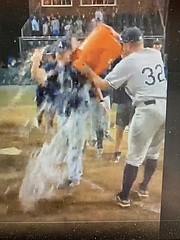 Alexandria Aces coach Chris Berset is doused by team members in celebration of their 10-0 shutout of the Silver Spring Thunderbolts July 27 at Frank Mann Field to advance to the championship series of the Cal Ripken Collegiate Baseball League. The best of 3 series begins July 29 with the Aces playing at home on July 30 at 6:30 p.m.

The Alexandria Aces have advanced to the finals of the Cal Ripken Collegiate Baseball League with a two-game sweep of the Silver Spring Thunderbolts in the semi final playoffs.

The Aces won the first of its semifinal games against the Thunderbolts 4-1 on July 25. In the second game of the series on July 27, the Aces were led by a strong pitching performance by Colton Brook (Stoney Brook University) enroute to a 10-0 victory. Brook went 5 innings and allowed only 3 hits and struck out 4. The Aces combined for 15 hits, led by Mark Kattula (Eastern Michigan University) who went 3 for 3 with 2 RBI's.

If there are rain delays, games and sites will be pushed back each day.