Potomac Streets Were Named for Defenders of Slavery
Votes

Potomac Streets Were Named for Defenders of Slavery

Now those streets bear the names of two important leaders of the historic African-American Scotland community. 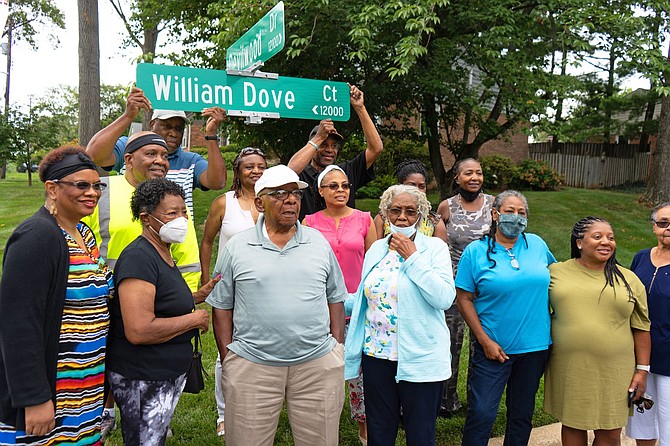 The Potomac street formerly known as Jubal Early Court is now William Dove Court. Scotland residents and Dove ancestors were on hand for the renaming.

By Montgomery County Park and Planning 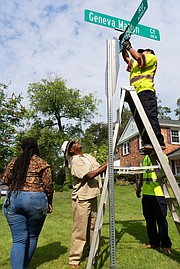 Joined by the families of Geneva Mason and William Dove, three new street signs were installed in Potomac to honor these two African American historical figures and replace signs named after Confederate generals.

The new signs reflect the history of the Scotland community off Seven Locks Road in Potomac. William Dove, an African American man born in slavery, purchased the first parcels of land in Scotland in 1880.

Geneva Mason was a prominent community leader throughout the 1960s who was instrumental in rebuilding the Scotland community.

“With residents and members of the Mason and Dove families, we celebrated the replacement of the signs bearing the names of the Confederate soldiers these streets used to be named for,” said County Councilmember Andrew Friedson, who represents Potomac, and who advocated for the changes, and a comprehensive review of names of streets, parks and facilities.

Montgomery Parks and Montgomery Planning are reviewing streets and parks named after Confederate soldiers at the request of County Council.

“We cannot change the troubling aspects of our past, but we must confront it – honestly and openly. We cannot recreate history, but we can decide how accurately we reflect it, and who we choose to glorify from it,” said the letter. “The names of our buildings and streets should reflect the people in and on them, not threaten and intimidate them. As a county with four of the ten most diverse cities in the country, our residents rightfully expect it; they deserve it; and they are demanding it.”

M-NCPPC is the sole entity authorized under Maryland law with naming or renaming streets in Montgomery County, except within certain independent municipalities. The Commission’s Planning Board has sole approval authority over street renaming.

The three county streets in Potomac and one park were identified as commemorating Confederate generals. This included the Potomac streets now formerly known as Jubal Early Court, J.E.B. Stuart Road, and J.E.B. Stuart Court. The new street signs were installed in July 2021.

About the new street names

The Montgomery County Planning Board, part of M-NCPPC, unanimously approved a resolution to begin a process to rename the three county streets on Jan. 14, 2021.

Research Behind the Street and Parks Facilities Renaming

M-NCPPC staff’s Phase 1 findings focus on identifying a subset of the streets and park assets that have full name matches with nationally known confederates. Staff are focused on finding nationally known Confederates, local Confederates, Confederate sympathizers, and slaveholders between the 1790s through 1860s. Post-Civil War history and 20th century figures have not yet been considered.

Additional research is still required to confirm last name associations for those streets and park assets with preliminary matches to M-NCPPC’s database of names. There are Confederate or slaveholder last names in the database that may not, after research, be found to correlate with a street or park name. Examples include Walter Johnson Road, named for a famous baseball player, but which was also the name of a Confederate.

The database is a work in progress but will be made available to the public for research and future use when historians have completed required additional work and quality control.