New Park Authority director takes the measure of her 420 parks. 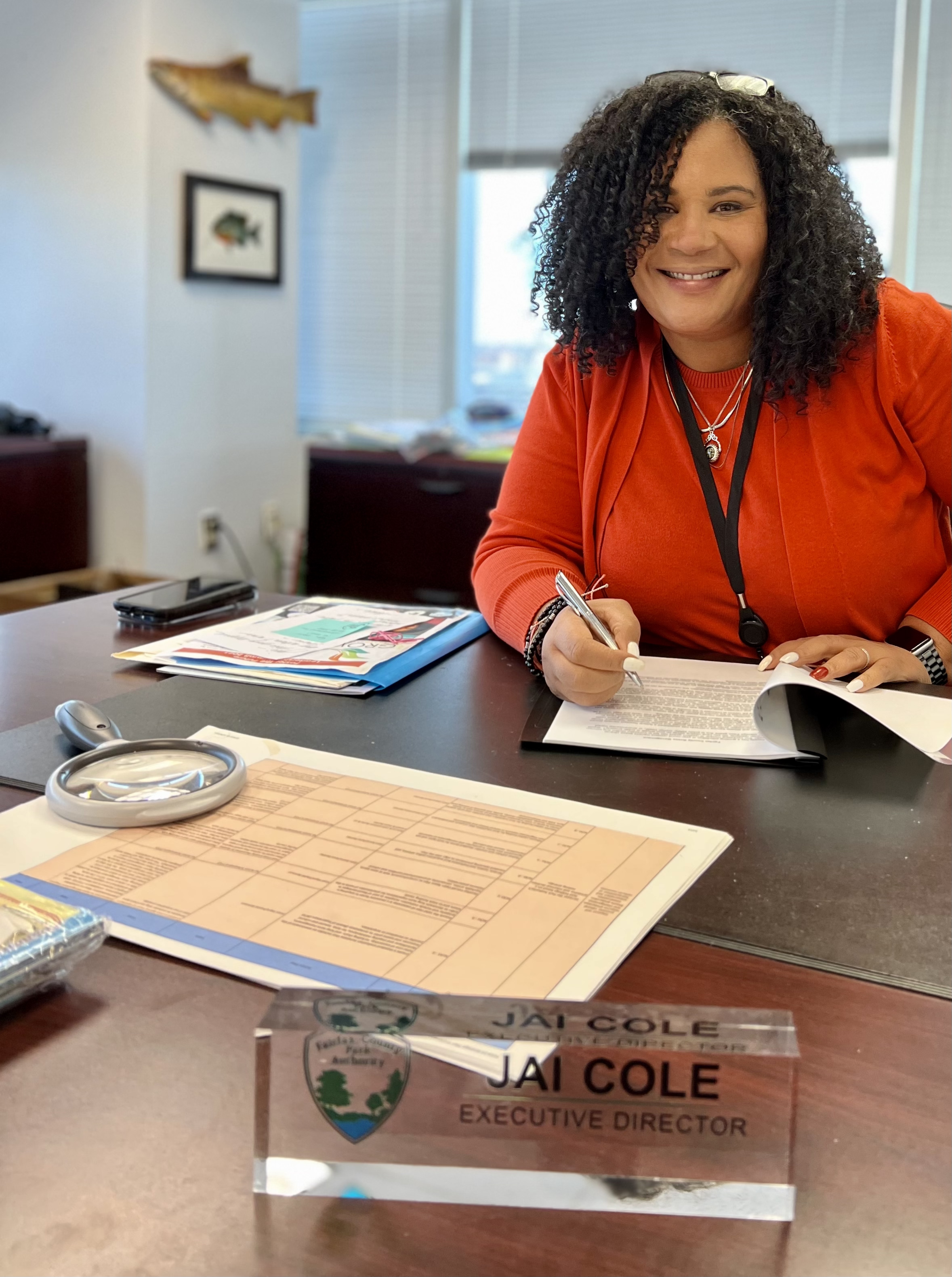 New Executive Director Jai Cole on the job in her office at Fairfax County Park Authority headquarters in the Herrity Building
director, Jai Cole, is working steadfastly on several goals, including two she set to accomplish in her first year: visit all 420 county parks in the system; and talk to the county employees ‘on the ground’ about park needs. Also in these months, Cole has maintained a frequent public presence at park events. To mention a few, she has been on-site and live streaming at Frying Pan Farm Park’s 60th year anniversary celebration, and holding piglets; cutting the ribbon at Martin Luther King Jr Park’s new playground; viewing children’s art at McLean Arts Central Park; and digging invasive plants at Laurel Hill Park on National Public Lands Day. She is embodying what she describes as “life’s rule #1” taught by her parents — “show up.”

With a packed event schedule and many other pulls on her time, how is Cole fairing toward her self-imposed starting job goals? She’s visited 141 parks to date and plans to average about ten new parks per week. She uses a specially developed app on her phone to track the visits and make notes about what she sees. Her reason for the visits is not just to reach a number, but to get a better sense of the breath and size of the county’s full park system, and assess the needs of each of its parts.

Two areas of concern loom for the park system: seasonal staffing shortfalls and gauging the prospects of upcoming projects.  With help-wanted signs up for all types of businesses, the county must compete for scarce employee resources and attempt to do so within the limits of government hourly rate restrictions. For example, she said that the Park Authority’s swimming pool capacities may not be defined by pool size but by the number of lifeguards they are able to hire. Similarly, rising costs in construction are inflating building costs. Cole must consider whether the market will settle later and projects for upgrading park facilities should wait out the inflation period for lower costs, or if continuing higher costs will dictate a review of project plans that can go forward.

Cole is eager to listen to employees at each site so they have an opportunity to highlight their site’s strengths and needs.

When she and her daughter viewed the new piglets at Frying Pan Farm Park, Cole noted they were able to “ooh and aah” because park employees had given thought to the many needs related to the pigs: food, the pen housing and capacity, and the budget for their on-going care. “Parks are like small cities,” she said, with needs for plumbers, grass cutters, architects, landscapers, engineers, and planners. They are like businesses, where you go to smile, but getting to that enjoyment is a serious business and “the Park Authority is dedicated to what we do.”

Cole grew up in Fairfax County as a 25 year resident of Reston. She attended the University of North Carolina, where she earned a B.A. in biology.