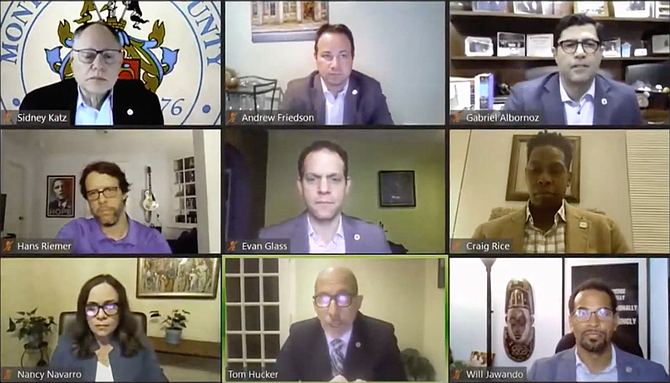 Montgomery County Council at the beginning of the public hearing on school resource officers on Thursday, Feb. 4, 2021. Screenshot

Two days before the public hearing on council member Will Jawando’s bill to remove School Resource Officers in public high schools because of the disproportionate impact it has on Black and brown students, councilmember Craig Rice introduced a bill to build positive law enforcement relationships within schools.

“There are plenty in the community who are on both sides,” said Rice, at the council session on Tuesday, Feb. 2, 2021. “There will be police in our community in some form, there needs to be positive relationships between those police officers and our children. … The other challenge is whether or not we are going to remove school resource officers or we are going to reimagine the program,” Rice said.

Will Jawando said he “appreciates the conversation and the effort to try to move this issue forward.” But that doesn’t change what the data already says, he said. “The facts are clear, when you remove SROs you have less arrests and you remove disproportionality,” said Jawando.

Former Council President Sidney Katz, co-sponsored Rice’s bill. “I sincerely believe that Montgomery County can and should be the leader and ultimately the prototype for how this issue is resolved,” said Katz. “This bill allows for flexibility for the Board of Education and for everyone else involved.”

Nancy Navarro said there are two issues: “One is the public safety of our students and our community,” and how the current SRO program contributes “to the disproportionalities that we know has existed and continues to exist.”

“Hopefully, we can marry all these efforts in a way that is positive, and addresses that in a way I believe is a 21st century public safety and a 21st century response to disproportionality and racial equity and social justice.”

At-large councilmember Hans Riemer co-sponsored Jawando’s bill. “What people sometimes hear is we should not have security in schools. That’s not what we’re proposing,” said Riemer.

“We are not proposing removing security or to not have security. We are simply saying we don’t need armed police officers with badges in the school,” said Riemer.