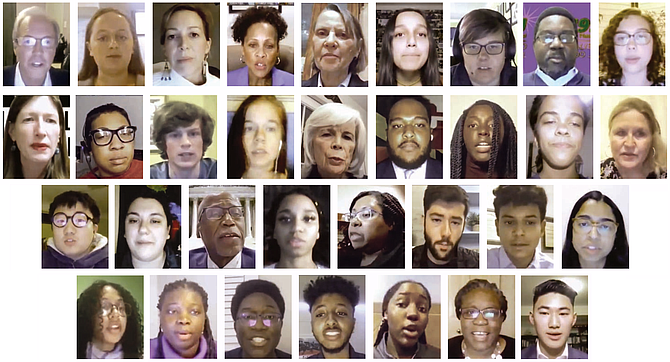 Some of the people who testified about school resource officers.

One would eliminate police assigned to schools altogether, citing data and concrete evidence of the disproportionate treatment of students of color; one attempts to combat discriminatory treatment with more training and protocols but allows the school superintendent to decide; the School Board, which was to make a recommendation in January, is now scheduled to make its own recommendation in May after getting its own opportunity to hear more feedback from students and parents. The school system has already increased the scope of the restorative justice program that has demonstrated effectiveness in pilot schools; council recently allocated $750,000 to expand the program into 40 middle schools. There were three public hearings last week – two before the school board and one before the council.

Navarro proposed a new approach last Friday, March 5, after hearing a significant majority of those who commented in the public hearings ask the Council to remove police from schools.

“The events of the past several months offer us a real opportunity to re-imagine and implement a public safety vehicle that de-emphasizes punitive law enforcement within our schools, and instead provides appropriate mental health and mentoring supports for our children,” said Navarro, a former member of Montgomery County’s Board of Education.

Her bill would eliminate the current SRO model and focus instead on the mental health needs of students.

According to Council documents, “under the umbrella of racial equity and social justice,” her proposal would:

Include positive youth development initiatives and mental health supports in the cluster model with appropriate training for team members.

JOINT SESSIONS of the council's education committee and public safety committee were already to focus on the first two bills.

Bill 46-20, School Resources Officers – Prohibited was introduced by Councilmembers Will Jawando and Hans Riemer and cosponsored by Council President Tom Hucker on Nov. 17, 2020. The Bill prohibits Montgomery County Police Department from deploying school resource officers to work full-time in schools. Those advocating for the removal of officers from schools believe the $3 million to fund the program could provide counselors, social workers, and health professionals to better help students.

Bill 7-21, Police – School Resource Officer – Building Positive Law Enforcement Relationships Within Schools was introduced by Councilmembers Craig Rice and Sidney Katz on Feb. 2, 2021. This Bill would authorize the Chief of Police to assign a law enforcement officer to work as a school resource officer in a county school upon the request of the superintendent of schools, with a requirement for enhanced training for a school resource officer. This bill would require the County to enter into a memorandum of understanding with the Montgomery County Public Schools governing the assignment of a school resource officer.

According to council documents, this bill would “continue funding the SRO program and add additional training requirements for SRO’s that include de-escalation techniques, mediation and conflict resolution, child and adolescent development, gang prevention and response, truancy prevention, trauma-informed response practices, and restorative justice. “These training topics align with a law enforcement goal to change student behavior rather than to change policing behavior and practices to engender greater student trust and community support. It remains unclear how the training requirements for Bill 7-21 align with current SRO training requirements,” according to Montgomery County’s Office of Legislative Oversight.

IN A PAST contentious committee meeting, Craig Rice promised Jawando that for every person Jawando finds against the SRO program he can find one that supports the program.

But almost all people testifying before the Board of Education last Tuesday and Thursday, March 2 and March 4, including students, alumni, teachers, juvenile justice attorneys and advocates, want the program to be eliminated.

They cite statistics acknowledged by the school system that Black students account for 45 percent of arrests and 43 percent of suspensions even though they account for only 22 percent of the student body.

People who want the program to continue testified last Thursday, March 4, before the County Council, including a past and present high school principal, the state's attorney’s office, some PTA presidents and a student at Clarksburg High School who alerted the officer in his school about a student who came to the high school with a gun. But most who testified called for ending the SRO program.

MONTGOMERY COUNTY’S Office of Legislative Oversight concluded that Rice’s bill to improve relationships with law enforcement officials in schools “would not advance racial equity and social justice because it would not prioritize reducing the statistical disparities in student arrests or suspensions by race, income, or disability status.”

“There are two questions to consider regarding SRO programs,” according to the Office of Legislative Oversight. “Do SRO programs advance safety for all students without unfairly targeting some student subgroups? Are SRO programs the best use of scarce resources for improving school climates and student outcomes?”

“A review of the research suggests “no” responses to both questions,” the Office of Legislative Oversight concluded. “Further, prior research suggests that school-police partnerships, even those aligned with best practices, yield school discipline and arrest rates that disparately impact Black and Latinx students as well as students with disabilities.”