Will Police Remain a Force in Montgomery County Schools?
Votes

Will Police Remain a Force in Montgomery County Schools? 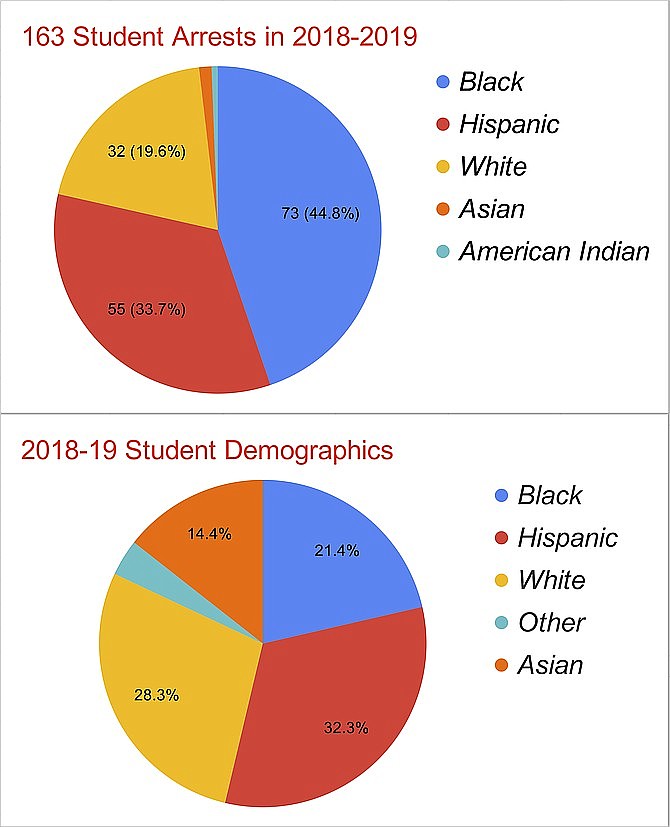 Council legislation would eliminate school resource officers from public schools; Jawando and Riemer say the program is part of the school-to-prison pipeline.

At-large councilmembers Will Jawando and Hans Riemer introduced legislation last November that would eliminate school resource officers from public schools, calling the program a part of the school-to-prison pipeline.

“It gets worse as you go down the system,” said Jawando.

The County Council has scheduled a public hearing on Feb. 4, 2020, in the evening at 7:30 p.m. on Zoom, to allow for all the people who want to comment on the SRO program.

“It’s not only that Black and Brown students are likely to be arrested, it’s once they are arrested, the outcomes are different,” said Riemer.

“The program was created with the best of intentions,” Jawando said, but, “we know disproportionate harm is happening.”

GIVE THE SCHOOL SYSTEM the chance to come up with their recommendations, said councilmember Craig Rice (District 2), at the introduction of Jawando’s bill in November.

“For us to have legislation before they can even give their opinion,” said Sidney Katz (District 3), Council President at the time, “is unfortunate.”

The Board of Education said it would make its recommendation on Jan. 12, at a regular scheduled meeting, and the Council moved the originally scheduled public hearing from January to February.

Jawando, at the time, said, “I do not expect a report [in January], that’s not the role they are taking.”

LAST WEEK, the Board of Education said they expect to make a recommendation in May; that more vetting of the SRO program and restorative justice initiatives is needed, plus they want to hold meetings in the community.

All high school principals in the county have supported the continuation of the school resource officer program, yet Superintendent Jack Smith acknowledged the problem.

“It’s absolutely undeniable that different members of the community and different communities in Montgomery County, in the state, and in the nation, have had a different experience with law enforcement over time. It is undeniable,” said Smith. “It is absolutely true that a disparity has and continues to exist for our students of color and especially our African American students.”

Student School Board member Nick Asante says the feedback from students who have had experience with the SRO program is critical.

He asked in the Fall for data on the breakdown of incidents and arrests and demographics in specific schools and said part of the disproportionate treatment comes from school culture and is incited within the culture of administrative teams.

“What is it that may be fueling a culture that we need to disrupt?” said Monifa McKnight, Deputy Superintendent.

But the school system was let down by the way data has been collected.

“Whatever changes we make to school safety and security, one of the things we should do is build a data infrastructure that makes sure we can always answer the questions,” said Smith.

That change can be done immediately, Smith said.

For the future, School Board member Lynne Harris (at-large) said the school system needs to “better help students throughout their journey with us.”

Hana O’Looney, student, Richard Montgomery, Montgomery County Regional Student Government Association: "Study after study has shown the disproportionate effect this program has had on the criminalization of Black, brown and disabled students despite the fact that no national or Maryland study has found that an increase in police presence decreases school violence."

Edward Owusu, Clarksburg High School principal: "School resource officers are needed in MCPS high schools. As a principal, I can recall many instances where SROs have reached out on weekday morning or evening, or a weekend, with information that would affect operations or safety of the school the following day, even sometimes in the following hour."

Robert Wilcox, Montgomery County Council of Parent-Teacher Associations: "The data shows deep disproportionality but we haven’t disaggregated that by school."

Willie Parker-Loan, Assistant, Chief of Police, MCPD: "SROs are an immediate face-to-face resource that principals can and do rely upon."

Lynne Harris, School Board Member, At-large: "We have to look very very closely at the reality of the impacts of everything that we do in the school system on our students of color."

Patricia O’Neill, School Board Member, District 3: "We need accurate data as a means of accountability."

Councilmember Hans Riemer, At-large: "What we are doing today is relying too much on policing. ...Let’s make sure that we do not have a school-to-prison pipeline in Montgomery County."'