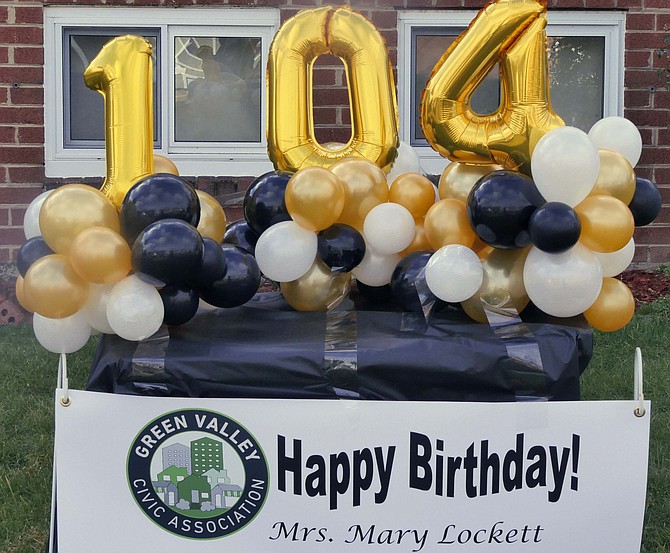 Mary Lockett’s house and yard are festooned with balloons and signs to celebrate her 104th birthday as neighbors dance across the street. Photo by Shirley Ruhe. 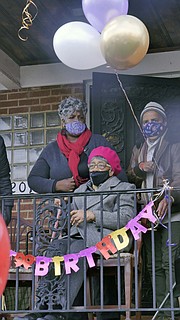 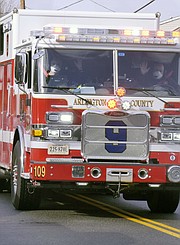 Arlington County Fire Department firefighters wave from the windows as they lead the birthday parade. 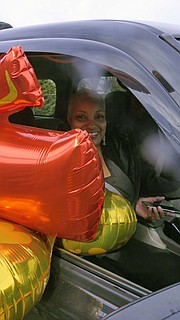 Ellen and Dennis McLendon are first in line to drive by Mary Lockett’s house on S. Kenmore Street on Sunday, February 7.

Mary Lockett’s house and yard are festooned with balloons and signs to celebrate her 104th birthday as neighbors dance across the street.

The snowflakes stopped and the sun came out Sunday, Feb. 7 in Green Valley just in time for Mary Lockett’s surprise 104th birthday car parade. Lockett sat bundled up on the porch of the house on S. Kenmore where she has lived since she was born.

Happy birthday music blared out of the house next door, and neighbors across the street danced to the rhythm. Several police cars led the parade with sirens blaring followed by a fire truck with firefighters waving through the windows. Ellen and Dennis McLendon were first in line at 2 p.m. down the street to lead the 30 or so cars that followed decked with balloons and celebratory signs.

As the cars passed by the house for the second time honking and waving, friends passed out chocolate cupcakes and commemorative bookmarks to the drivers and passengers in the parade.

Ms. Mary Lockett was born on Feb. 7, 1917 as the sixth of eight siblings, and is the only one living today. She credits her longevity to eating her blueberries daily. Lockett remains independent, driving until she was 90. and follows a regular schedule which has her up at 5 a.m., making her own meals, cleaning house and washing and ironing her clothes. She retires at night after she has watched Wheel of Fortune.

Lockett has been an active member of Mt. Pleasant Baptist Church in Alexandria for the past 80 years and served as usher for more than 50 years.

Lockett has four children (two deceased), three grandchildren (one deceased) and six great-grandchildren. She was a domestic worker for many years and later worked at the Pentagon.