The Madness of Trust and Betrayal in Reston
Votes

The Madness of Trust and Betrayal in Reston

Months of no hot water for mixed-use Reston condo 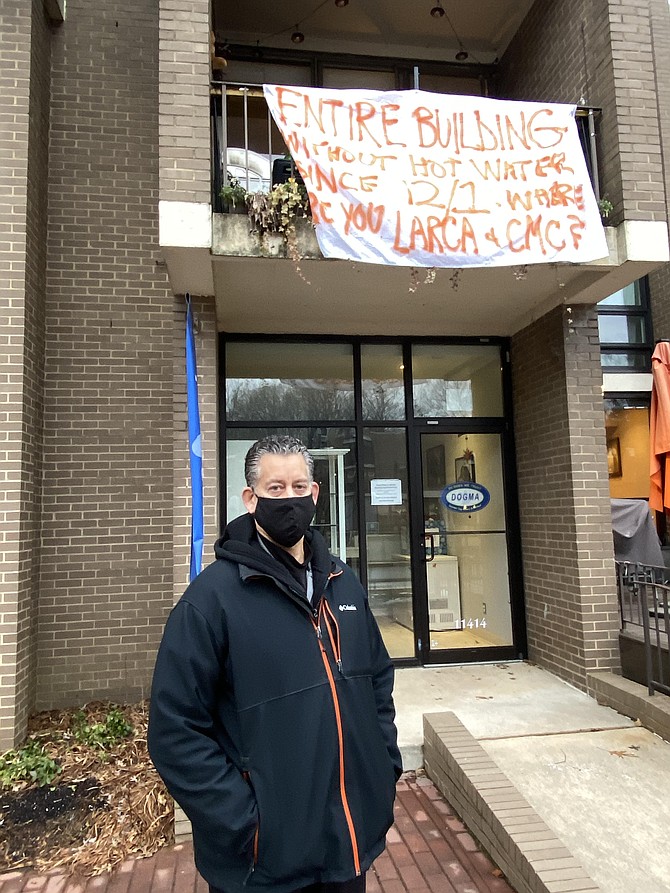 Matt Jordan and his wife, Robin (not pictured), spray-painted their protest banner and hung it off the railing of their condominium. Their unit happens to be one unit away from Lake Anne Brew House, owned and operated by Jason Romano, who some people call the “disputed” President of the Lake Anne Reston Community Association (LARCA), that Community Management Corporation, CMC, recognizes as President. Photo by Mercia Hobson. 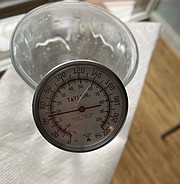 Water temperature out of the hot water tap belonging to George and Vicky Hadjikyriakou at their residence in the Quayside building registers 44 degrees, a 2.5-degree difference from the waters in the Northern Atlantic Ocean, Portland, Maine.

One million gallons looks like this. If given the comment that "approximately 330 gallons of water" are leaking from the underground trunk line on the first-floor commercial units, that equals a loss of approximately 2,890,800 gallons of billable water a year. Rounded to 3 million gallons, that would be three swimming pools the size of the left-hand image.

It's a losing game in the long run for any condo association to postpone needed maintenance on their buildings or make band-aid fixes. It's also not best practices for a condo association to dip into their coffers, funded by members, to pay for millions of billable gallons of Fairfax County water leaking into the ground.

Matt and Robin Jordan own a unit in the Quayside mixed-use building facing Lake Anne Village Center Plaza in Reston. On Wednesday, Feb. 10, they and some individuals in the other 19 residential and 8 commercial units reached their limit. The day marked 77 days without hot water.

Matt said he and Robin felt "extremely frustrated," "ignored," and "not informed of what's going on." They hung a spray-painted protest banner for all to see. Emblazoned with orange letters, it read: 'Entire building without hot water since 12/1. Where are you, LARCA and CMC?' Then they took to social media.

"We elected the (Lake Anne Reston Community Association, LARCA) board. We chose CMC (Community Management Corporation). When you feel your voice is not heard, you have to resort to some other method," Matt said.

GEORGE AND VICKY HADJIKYRIAKOU also own a unit at Quayside. On Feb. 11, the National Oceanic and Atmospheric Administration recorded the water in the Northern Atlantic Ocean at Portland, Maine, at 40.5 degrees. Asked to take the water's temperature flowing out of their "hot tap," Vicky sent an image to the Connection. The photo shows the recorded temperature with a difference of only 2.5 degrees, at 44 degrees.

"This is outrageous," George said. "We pay $1,000 a month in condo fees for electricity, water, basic cable, and trash removal."

Robin Jordan said that she took a thermometer assessment of her water. "It was coming out of the tap at 45 degrees," she said. The Jordans remain distraught at having to put big soup pots of water in the tub and squat over them to take a sponge bath.

Jason Romano, co-owner of Lake Anne Brew House, part of the Quayside building, says he is the 2019-2021 President of the five-member LARCA board. Political in-fighting and squabbling among board members became apparent. Election result as to who is LARCA President is contested by LARCA board member Senzel Schaefer who says she is President. The case is headed toward litigation.

Schaefer said during her tenure as LARCA President for the October 2019-2021 term, she planned to replace CMC once she and others had a majority on the board. However, Schaefer's first motion and one the LARCA board did unanimously approve, according to Schaefer, was Ernst & Young's operational audit, an analysis of expenditures and activities. It flagged concerns on past financial practices decision-making by the board from 2017 up to Nov. 2019. An investigation ordered by the Commonwealth Attorney to be conducted by the Fairfax County Police followed.

Referencing the 2019-2021 election, Schaefer said, "Well, he (Romano) lost but refused to concede. CMC anointed him President, and continues to bill LARCA from their base cost of $140,000 to approximately $225,000 a year. LARCA is a cash cow for CMC." She said the locks on the doors are now changed, and she cannot enter.

When asked if Romano is board president, Matt Jordan said," I'm saying he's recognized by CMC management… And that's a big difference. They have control of the board because three members banded together…Two members are effectively shut out of decision-making." Jordan added if it was an impartial board, where they agreed to disagree, they could get back to business. But with a split, there is not the leadership capable of getting the situation in hand.

"We, as the residents, suffer," said Jordan.

In the meantime, Quayside resident Bac Hoang said she goes to her sister's house to shower twice a week. "But my husband, he has to suffer the shower every day… We are not young. My husband is in his 80s." Like Jordan, Hoang said the big issue was that the LARCA board was in dispute of who is the board and that one group "hijacked" it.

"So, we are in the middle, and we get squished…I think we are all a bunch of stupid people to have let it happen for so long," Hoang said.

As the days of no hot water wore on, some asked about complaining to the Health Department. Hoang said she was cautioned not to do it, so instead, she kept quiet. "If you do that, they will condemn our building, and where will we go,” Hoang said she was told.

According to Hadjikyriakou, who previously served on the elected five-member LARCA board, the root cause of the problem was LARCA's decision to manage the property itself rather than hire a "true" management company.

"We were taking information from the staff we hired to reside on the property… Unfortunately, people on the board are not engineers, plumbers, or electricians… It ends up costing people who live here," he said.

The second problem Hadjikyriakou said is that if LARCA had managed its finances correctly, planning for infrastructure replacement and building up the reserve funds from the beginning, they would not have needed to pay in so to play catch up.

COVID closed Jennifer Lee's new business, Barberland Gentleman's Grooming, on Washington Plaza. That hurt. Then eleven weeks of no hot water cut severely into anticipated revenue. "I lost a lot of money. I've been waiting and waiting…Now I boil water with a hot pot I got at the Korean grocery. I tell my clients I'm treating you like a king."

SUPERVISOR Walter Alcorn (D-Hunter Mill District) said, "My office is aware of the complaints filed to Fairfax County Code Enforcement, and they are investigating. This situation illustrates the serious problem of aging and decaying infrastructure at Lake Anne, which may require intervention to ensure this cultural heart of Reston is sustainable."

Romano is co-owner of Lake Anne Brew House that occupies one of the first-floor commercial units at Quayside. According to Romano, hot water from the boiler is leaking out of the underground trunk lines, the pipes beneath the concrete on the first floor commercial units. Romano said "approximately 330 gallons" of water leak into the ground every hour. "We're talking 60-year-old lines that have holes, so we're trying to deal with that."

Then there is the gas hot water boiler itself. The board approved an interim solution to get hot water to residents, according to Romano. The board first replaced the old 70-gallon commercial boiler with a new 70-gallon boiler for $12,000. Romano said that it proved not appropriate because water continued to leak out of the pipes, and condensation formed, which could ruin the boiler. They had it disconnected.

On Feb. 11, the board approved the $35,000 purchase of another, more powerful boiler, one with a 121-gallon capacity and greater BTUs, according to Romano. "What we're doing with this is compensating for the water losses that we're experiencing…It should arrive by Tuesday (Feb. 14)."

"We are hoping we can have the hot water restored by the weekend of Friday, Feb. 19," said Romano.

The billable water that passes through the trunk lines will continue to leak into the ground at a rate of approximately 330 gallons an hour. The U.S. Geological Survey water-use data can visualize, in a million gallons, the yearly water loss of the approximate 2,890,800 gallons of water if averaged to 3 million gallons. That is the approximate number of water gallons lost in one year if the trunk line is not repaired or replaced.

"As long as we have an interim solution in place that buys us time… We're not under the gun for implementing a rush job (to repair the leaking lines)," said Romano.