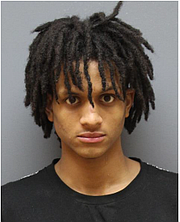 A 20-year-old man has been arrested after he fled the Northern Virginia area following Wednesday’s deadly shooting of Samuel Onyeuka in Reston. Jalenn Maurtiece Keene, of Newport News, faces charges of second-degree murder and use of a firearm in the commission of a felony.

Detectives from Major Crimes Bureau were able to identify and subsequently locate Keene through financial records and surveillance footage. Once identified, detectives coordinated with the Newport News Police Department, who safely took Keene into custody on Friday night. Keene will remain in the custody of the Newport News Jail until he is extradited back to Fairfax County.

During Keene’s arrest, the Nissan Rogue that was used in the shooting was located in Newport News as well as a gun. Detectives are awaiting test results to determine if the gun located was the gun used in the crime. Detectives continue to investigate the circumstances that led to the shooting, but determined Keene and Onyeuka both attended South Lakes High School.

Officers were called to the 2300 block of Branleigh Park Court shortly after 2 p.m. on Wednesday, Feb. 10 for a report of gunshots and a person lying on the ground. When officers arrived, they discovered Samuel Onyeuka, 20, of Reston, suffering from gunshot wounds to the upper body. Rescue personnel pronounced him deceased at the scene.

Detectives canvassed the area and determined Onyeuka was walking on the sidewalk near his home when he was shot. Preliminarily, detectives believe this shooting was targeted and not a random act of violence. Moments after the shooting, the suspect was seen leaving the area in a silver SUV, possibly a Nissan Rogue or similar vehicle. The suspect is described as a light skinned black male, slim, approximately 6 feet tall with dark hair in braids or twists.

The Office of the Chief Medical Examiner ruled the death a homicide following an autopsy. This is an active investigation and detectives continue to conduct interviews and process evidence. This is being investigated as the first homicide year to date in Fairfax County.