At Dog Parks, the Clean-Up Bag is a Must
Votes

At Dog Parks, the Clean-Up Bag is a Must

Walks are important for the family dog, but so is scooping the poop. 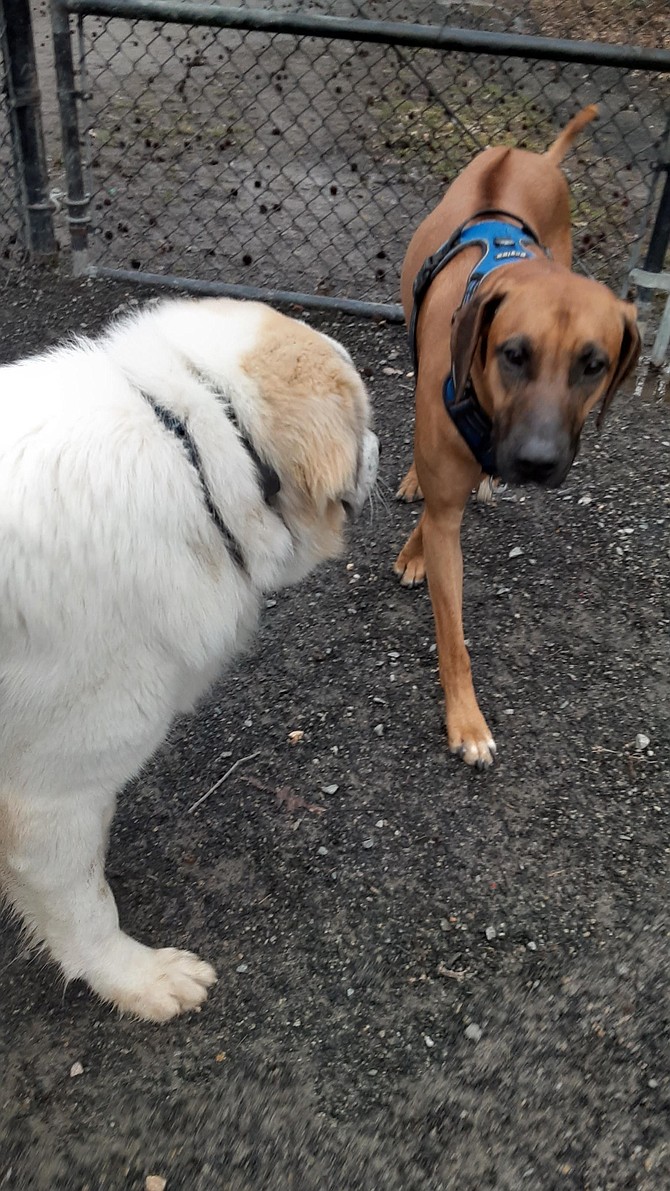 A pair of dogs named Apollo at the Old Mill dog park. 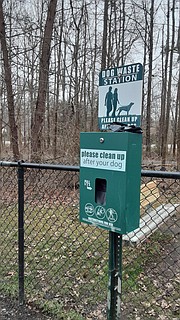 The rules are posted, and most pet owners follow them.

At the Old Mill Dog Park in Mount Vernon, Apollo, a light-colored Great Pyrenees, met another dog named Apollo, a Rhodesian Ridgeback, and they ran around until Penny, a collie-mix, showed up, and then all three were in a game of chase. The deck at this dog park was small-stone gravel, and clean-up bags were available, but the trees took in all the scent-marking leg lifts the dogs had to dish out. That’s the way it is in 10 county “off leash” dog parks across the area.

This dog park is well-used, but there wasn’t an “accident” to be seen inside the park. “People are pretty responsible,” said Susan, the owner of the Ridgeback. On the trail to the park, someone forgot to bring a bag, and the dog waste is not one of those things that just goes away with the next storm.

JUDY PEDERSEN at the Fairfax County Park Authority is in tune with what’s going on at the parks, and has not experienced many problems. “We have not noticed any significant impact to the vegetation surrounding a dog park. Dog owners are required to pick up after the dogs, so we believe any potential impacts that there might be, are mitigated by that practice,” Pedersen said.

Since a dog’s diet is not a plant-based diet like cows and horses, dog waste is not ideal for use as a fertilizer and “unsuitable for soil enrichment,” said DoodyCalls, a pet waste clean-up service that was started in Northern Virginia in 2000 by Jacob and Susan D’Aniello. Obviously, the size of the dog determines the amount of waste, but on average, Doody Calls says that a dog produces about 274 pounds of waste a year. If left on the ground, particularly in a fenced-in yard, that could end up as a stinky mess that might take a while to absorb into the ground, and then it’s not good for the grass or trees, DoodyCalls said.

Gardeners may go out and buy a bag of manure for the garden, but not all waste is made equal. Whether a specific animal’s waste is beneficial to the soil depends primarily upon the animal’s diet. As a rule of thumb, in order for waste to be used as an effective fertilizer it must consist mainly of digested plant matter, so that’s why the bags of cow manure are so good for the garden and dog waste is not. “Cows and horses are herbivores, which makes their waste ideal for use as fertilizer. In contrast, a dog’s diet is made up of mostly animal products, making their waste unsuitable for soil enrichment,” DoodyCalls said.

Just throw it in the compost pile, right? That’s not the answer either, they said. It doesn’t break down at the rate that it would pile up, it could lead to “a number of potential health hazards to families and their pets,” DoodyCalls said. Their recommendation is to bag it, tie the bag up so there is no leakage, and throw it in the trash.

There are in-ground waste digesters, but these aren’t foolproof either. For one, they have to be moved about once a year, and heavy clay soils like in some parts of Fairfax County, often prevent digesters from draining properly.

Special Features: Water supply, and when the large area of the dog park is closed due to wet conditions or maintenance, the small area only has a capacity of 26 dogs