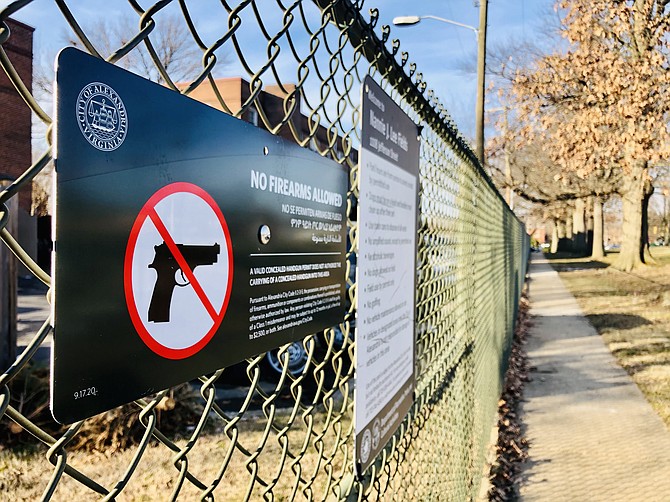 Signs like these went up across the city last year after the General Assembly gave local governments authority to regulate guns. Photo by Michael Lee Pope.

“Virginia is a leader now,” said Secretary of Public Safety and Homeland Security Brian Moran, who formerly represented Alexandria in the House of Delegates. “We’ve gone from dead last to first in terms of responsible gun-control legislation.

One campaign promise Democrats have been unable to accomplish is limiting access to assault weapons and high-capacity magazines, deadly equipment that has been used to commit some of the worst mass shootings in American history. After Democrats seized control of the General Assembly last year, cracking down on assault weapons and high-capacity magazines was a top priority for the new majority. But Senate Democratic Leader Dick Saslaw ended up withdrawing his own bill on the issue, and Del. Mark Levine (D-45) was unable to get his bill through the Senate. This year, nobody even bothered introducing an assault-weapons bill.

“Virginia is a leader now. We’ve gone from dead last to first in terms of responsible gun-control legislation.”

"I don't think it has enough votes to pass," explained Levine. "It's misunderstood because people overstate what it is because it's really a high-capacity magazine ban more than an assault-weapons ban because we're grandfathering in the assault weapons."

SOME OF THE BILLS lawmakers are sending the governor are improvements to new laws that were passed last year. For example, one of the signature accomplishments of the 2020 General Assembly session was the law requiring universal background checks. This bill closed the gun-show loophole, but it also created a new problem. If the State Police did not complete a background check within three days, the sale was permitted to go through anyway. That's why Del. Alfonso Lopez (D-49) introduced a bill to give the State Police five days to conduct a background check.

"If we keep expanding the time, you're taking the pressure off the police to do it in a timely fashion," said Phillip Van Cleve, president of the Virginia Citizens Defense League. "This whole system was sold to gun owners as an instant check, and the longer you stretch it the more that becomes a joke."

Lopez pointed to statistics from the State Police showing examples of how background checks taking longer than three days can lead to problems. Last year, the State Police logged 787 transactions that were denied in three days or less. However, he said, 235 background checks that were eventually rejected took longer than three days. The way the laws work now, that would be hundreds purchases in 2020 that should have been denied but weren't because of a process known as "default proceed."

"So a purchase would have been allowed to go forward — 235 examples," said Lopez. "To keep firearms out of the hands of dangerous individuals who pose a threat to themselves, their loved ones and the community at large, I believe that making this one word change is the best course of action for the commonwealth."

LAWMAKERS ARE ALSO haunted by the specter of the ghost guns, which are firearms created by 3D printers or assembled at home from kits. Because none of the new gun-violence measures passed last year would apply to these guns, some lawmakers are concerned that this is a class of firearms that would be able to evade all the laws designed to keep weapons out of the hands of people who shouldn't have them. That's why Del. Marcus Simon (D-53) introduced a bill to prohibit people buying kits and assembling ghost guns.

"It's untraceable, and it really evades the entire system,” said Simon. "You build the gun yourself and it's got no serial number. You require no background check. There was no age limit to purchase it.”

Although the original version of his bill outlawed all old guns without serial numbers, senators changed it to grandfather in all firearms that predated the new law. Advocates say they liked Simon's original version better, but in the sausage-making factory of the General Assembly this is the kind of compromise that's often needed to get bills to the governor's desk.

Another bill that senators changed was one that allowed school boards to prohibit guns on school property, which senators amended to apply only to school administration buildings. Guns are already prohibited at schools, but the Loudoun County School Board determined they didn’t have the authority to ban firearms in the building where they meet. So they asked Del. Suhas Subramanyam (D-87) to introduce a bill granting that authority.

"I have no problem with administrative buildings, if they want to designate it as a gun-free zone just like we passed last year with city councils or county boards," said Sen. Chap Petersen (D-34). "I do have a little bit of an issue if a school board just buys a random property as a vacant lot and then passes an ordinance saying it's a gun-free zone."

THE ALEXANDRIA DELEGATION is sending two gun bills to the governor, one to prohibit firearms at polling places and another to prevent people from bringing them into Capitol Square or other state government buildings. Levine introduced the bill to prohibit guns at polling places and vote counting centers after two Virginia men were arrested after traveling to Pennsylvania to attack a vote-counting site. Gun enthusiasts dismissed the bill as creating yet another gun-free zone.

"This is to prevent intimidation?" asked firearms enthusiast Vincent Smith during a public hearing on Levine's bill. "There are a large portion of this country who are intimidated by clowns, so much so that it has a name, it's called 'coulrophobia.' So are you going to also outlaw clowns at polling places?"

Levine and state Sen. Adam Ebbin (D-30) both introduced bills prohibiting guns in Capitol Square, although the two bills are different enough to send them into a closed-door conference committee where lawmakers will resolve their differences in secret. Levine's bill includes a larger geographic area, including major streets surrounding the Capitol, whereas the Ebbin version bans more weapons other than guns, including knives.

"Clearly there's an appetite among the voters to regulate and ban semiautomatic assault-style rifles.”

ASSAULT WEAPONS remain a lingering concern for advocates of gun-violence prevention because of the prominent role they have played in so many of the mass shootings over the last 20 years. Levine says he would have introduced an assault weapons ban if lawmakers had not been limited to seven bills because of the limited duration of the session this year. Using one of those seven slots for a bill that would have not been successful would have been a mistake, he said, especially considering he's sending two gun bills to the governor this year.

"It's a conundrum why the House and the Senate didn't want to take this up," responded Lori Haas, Virginia director of the Coalition to Stop Gun Violence. "Clearly there's an appetite among the voters to regulate and ban semiautomatic assault-style rifles. Polling as recent as October showed overwhelming support for doing something about these people-killers."