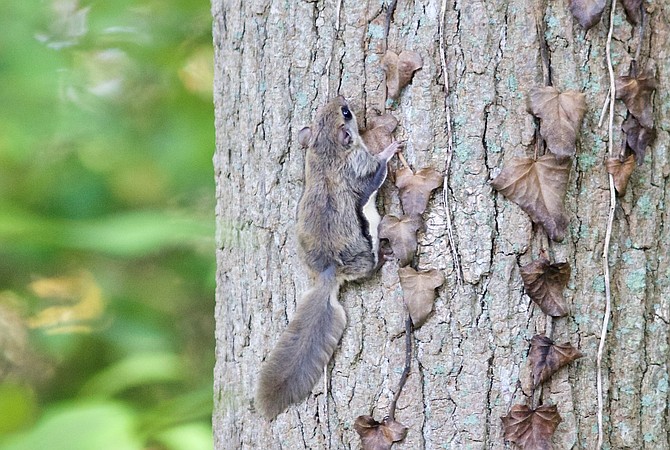 A flying squirrel on a tree's bark at Dyke Marsh, showing how they camouflage on trees. Photo by Ed Eder 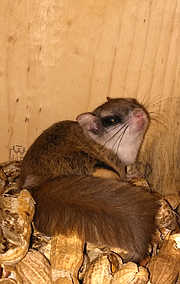 Flying squirrel munching on peanuts in a roosting box in a Fairfax Station backyard. 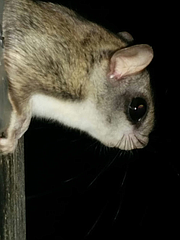 Flying squirrel halfway out of the opening of the roosting box, preparing to make a leap into “flight.” 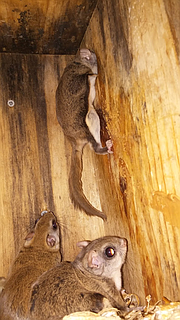 Flying squirrels often congregate in man-made roosting and nesting boxes, similar to what they would do in a tree roost. Here, one is getting ready to exit the box.

Around dusk or dawn, high up in the tree canopy, keen observers might spot a scurry. What’s a scurry? A scurry is a group of flying squirrels (Glaucomys Volans), nocturnal, arboreal mammals, one of the many fascinating facts that captivated 89 attendees at the Feb. 17 Zoom meeting of the Friends of Dyke Marsh.

Naturalist Kim Young, from Fairfax County Park Authority’s Hidden Oaks Nature Center, told the group that flying squirrels, members of the rodent family, weigh around 2.5 ounces, about the same as a cellphone, and are eight inches long, with their tail being from a third to a half of that length. With gray-brown fur, they easily camouflage against tree trunks. They have a white belly and large eyes in proportion to their bodies. They can walk upside down and “stamp their feet in a war dance” if they sense a predator nearby, Young said.

These squirrels eat nuts in the fall and winter and store nuts in nests, cracks, cavities and tree forks, caches with up to 15,000 nuts in a season. A telltale sign of flying squirrels is the acorn debris they leave behind. Flying squirrels make a round oval hole in the acorn when they probe for nutmeat and beetle larvae, unlike other rodents that completely destroy acorns. “They make a smooth cut with no jagged edges,” Young said. They are omnivores and also eat berries, insects, fungi, bird eggs, slugs, snails, carrion and tree sap. Their most common predators are owls, feral cats and hawks.

Flying squirrels likely have multiple mates and have two breeding seasons, January to April and June to August. The females, called does, are highly territorial and have two-three kits per litter. The males, called bucks, are derelict dads. They don’t help raise the young.

So, do they fly? Technically, no, Young clarified. They are expert gliders and use the membrane, the patagium, between their ribs and ankles that in effect forms a parachute. When they want to travel, using their powerful hind feet, they launch and spread this extendable cartilage. They can cover 150 feet in a single glide and one was documented doing a 250-foot glide, almost a football field length. Their flight is not powered flight, which involves flapping, like that of birds, insects and bats. Their leaps can reach speeds up to 20 miles per hour.

Rocky, hero of the animated “Rocky and the Bullwinkle Show” (1959 to 1964), was a plucky flying squirrel. Richmond Virginia’s minor league baseball team is called the Flying Squirrels. In a fans’ contest, this intriguing little rodent beat out the Rock Hoppers, Rhinos, Flatheads and Hush Puppies. They will “soar back” and open the 2021 baseball season on May 4, say promoters.

“They’re the cutest little mammal I’ve ever seen, charismatic,” Young told the Dyke Marsh group. “They remind you of what an incredible world we have.”

The meeting was sponsored by the Friends of Dyke Marsh, https://www.fodm.org/.