Mount Vernon’s Martha Washington is hanging up the bonnet and dress after 20 years. 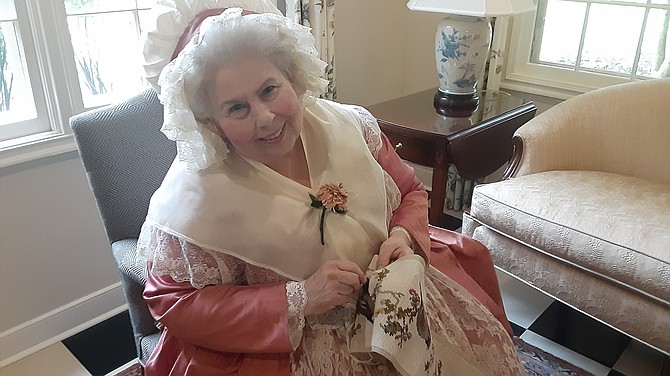 Mary Wiseman says it's time to hang up her bonnet as Martha Washington in Mount Vernon. Photo by Mike Salmon.

For Mary Wiseman, historically portraying Lady Washington for nearly 20 years at the Mount Vernon plantation has branched out in ways she never could imagine back in the beginning. She’s become an originator of “character interpretation,” an expert on the life and times of the real 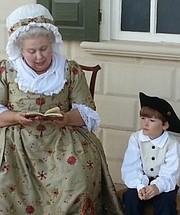 At Mount Vernon, she sits with her grandson in costume years ago.

Martha, a history teacher of sorts, and a character around the Mount Vernon community where she’s lived for the past 15 years. Now she’s passing the bonnet to a younger Martha character interpreter, and looks back with joy at her opportunities.

“I didn’t intend to become the nation’s grandmother, but I kind of did,” Wiseman said, “it’s been a joy for me.”

For years, she’d wake up in her Belle View apartment, put on the authentic-looking bonnet and puffy dress and drive the short distance to the plantation where she’d smile, teach history and bring authenticity for the thousands that walked through the gate. The visitors would feel like they were talking to the real Martha. “I’m very proud of that,” she said.

Wiseman and Martha shared many traits in real life, only coincidence, but it added to the portrayal. They were both of Welsh and English descent, both doting grandmothers, and both came from the same part of Virginia between Richmond and Fredericksburg. That’s where Wiseman lives now in New Kent County. “I live about 10 miles as the crow flies from where Martha was born,” she said. “I didn’t plan any of it.”

It all started in Williamsburg back in the 1970s where she was perfecting the skill of character interpretation on a variety of characters in Colonial Williamsburg. Martha Washington was one of the characters she studied, and years later, there was an opening in Mount Vernon, so she jumped

Now with her grandson Zach at age 15.

on it, commuting for a while. In 2004, she moved to Belle View and took on the role, even though her contacts in Williamsburg couldn’t believe she’d move to an area riddled with the congestion and traffic. The community of Belle View embraced her though, and at Primo’s Restaurant, they know her order and the special salad she gets. “I became a fixture in that area,” she said. Many times, she would leave on the bonnet and dress — and smile. “People could come and sit down with me and talk,” she said.

From Mary to Martha

It took some studying at first though.

“In studying her character, I was impressed with how much she accomplished,” said Wiseman. Martha Washington was born Martha Dandridge,

“I didn’t intend to become the nation’s grandmother, but I kind of did. it’s been a joy for me.”

the oldest of eight children, in New Kent County, Virginia. She married Daniel Parke Custis in 1750 and gave birth to Daniel Parke Custis the son, in 1751, and then Francis Parke Custis in 1753. Her husband died in 1757, and she met George Washington a year later and the two got married in early 1759 and she moved into Mount Vernon. There were illnesses and deaths in the family, and a new grandchild of Martha's was born, and then she traveled up to Valley Forge in the winter of 1777 to be with George. In 1783, the Revolutionary War was over, George returned home, and became the first president in 1789.”

As Martha, Wiseman has gotten to ride down Pennsylvania Avenue in the Memorial Day parades, rode in a GW Birthday parade in Old Town, participated in July 4th celebrations, candlelight Christmas events, and met another famous Martha, Martha Stewart.

“I had the delight of giving Martha Stewart a recommendation,” she said.

Over the last few years, she’s trained Elizabeth Keaney to be the new Martha, and Keaney will be coming in to portray Martha, and also living in Belle View. Keaney started playing Martha’s granddaughter years ago, and now “she sounds exactly like me,” Wiseman said.

Wiseman’s bonnet and puffy dress will still be in use though for an occasional appearance for a history class or guest appearance in New Kent County.

While in Mount Vernon this summer, Wiseman is filming a documentary of sorts on her life, and was surprised with a medal — a purple heart from her father who was killed in World War II right before she was born.