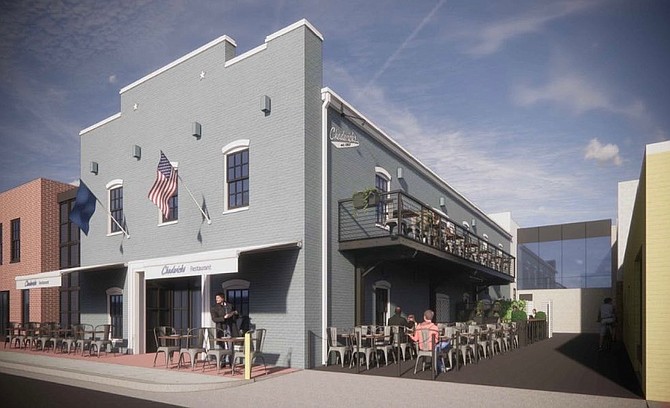 Rendering of the new Chadwicks outdoor seating, set to be ready in September.

If there’s one feature that was prized above almost all others in the restaurant world this past year, it’s outdoor seating. But long before COVID-19 was ever a glimmer on the horizon, Chadwicks owner Trae Lamond had his sights set on just such an improvement to the well-known restaurant on The Strand.

“When I took over in 2015, I had dreams of, ‘How can I compete with the outdoor space of all these other places?’” Lamond said. His daydreams ran the gamut from rooftop dining to bridges across to the roofs of neighboring businesses, but ultimately, he knew the alley adjacent to the restaurant made the most sense.

A few tweaks later – the most important being a new location for the restaurant’s Dumpsters – and Lamond was off and running. Soon, he had an attorney, architect and designer involved, ensuring every aspect of the expansion was done properly.

“I just need to make sure I do this right. This is such an opportunity for Chadwicks,” he said.

With plans in place, the next step was to submit the proposal to the city, where it passed through the Board of Architectural Review as well as the Planning Commission before landing on the City Council docket. In terms of the timeline, Lamond said it couldn’t have gone smoother.

“I think that it might be a little bit of right place, right time, with COVID and looking to set small businesses up to succeed … but a lot of credit goes to our current council and mayor because they want us to succeed, they want us to thrive,” he said.

Chadwicks was approved for 80 new outdoor seats, but don’t expect the restaurant to begin with that. Rather, Lamond wants to start out in a manageable fashion, both to ramp up calmly in Chadwicks’ kitchen as well as to maximize guests’ enjoyment of the new space.

“Our kitchen is somewhat small, so we don’t want to shoot ourselves in the foot by setting ourselves up to fail,” he said. Expect closer to 50 seats available when the new space opens in a couple months’ time.

And with a brick patio and steel balcony, “no one can tell me it’s not going to be an improvement,” Lamond said. About 10 regular-height tables will adorn the patio, with several bar-height tables tucked away near the back and a small wait station for easy staff access. And then there’s the upper level.

“Up top there’s the balcony, which will have we’re hoping six two-top tables, enough seating for 12 people,” Lamond said. “You’ll be able to overlook right over the top of Big Wheel Bikes into Waterfront Park, the city marina, (and) you can wave to your friends on the rooftop of Misha’s coffee shop.”

“I’m very grateful to everybody that’s gotten us this far,” Lamond said. “One of my favorite things about (owning Chadwicks) is hosting people, and hosting the party. And I think this is going to be an absolute game-changer for us as far as offering something new and top-notch.”