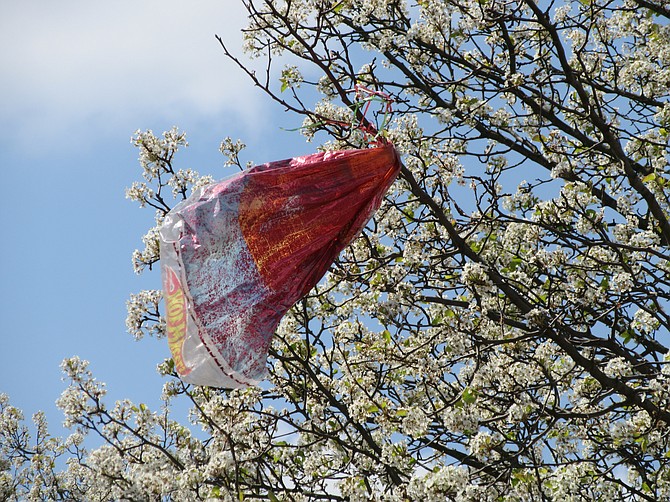 This balloon was snagged in a tree in the Mount Vernon area.

A balloon with a mind of its own follows a young boy around the streets of Paris amusing all, in the classic French children’s movie, “The Red Balloon.” But when balloons come down, they are not so amusing.

People have released balloons into the sky for years, to cheer up parties, jamborees, games, graduations and celebrations, but with enactment of a new Virginia law, intentionally releasing balloons outdoors can bring a $25 fine for each balloon.

On June 29, Virginia Governor Ralph Northam signed into law a bill that bans the intentional outdoor release of nonbiodegradable balloons. Prior to this new law, people could release up to 50 balloons at one time. Virginia Beach Del. Nancy Guy, the bill’s sponsor, was motivated in part by Virginia Aquarium officials in Virginia Beach who have found balloons and balloon remnants in the stomachs of turtles and marine mammals like dolphins and whales.

While some legislators trivialized the bill as it languished in the General Assembly for a decade, Guy said during the legislators’ debate that intentionally releasing balloons is “a legalized form of littering.”

Latex balloons, foil balloons and plastic ribbons are a top source of debris found on Virginia’s remote beaches, according to Clean Virginia Waterways of Longwood University. The Virginia Marine Debris Reduction Plan identified balloons and their attachments as one of the top five most harmful types of marine debris.

Why Balloons Are a Problem

Aquatic animals mistake balloons for food because some balloons look like jellyfish. When eaten, balloons can cause intestinal blockage and be lethal. “Balloons and plastic ribbons are among the deadliest types of ocean trash to all kinds of wildlife including sea turtles and birds,” said Christina Trapani, a Longwood researcher.

Mount Vernon Delegate Paul Krizek voted for the bill. “As much as we all love balloons filled with helium, it makes sense to legally forbid the purposeful release into the environment, especially as marine wildlife like turtles and birds see the deflated, floating balloon plastic as food which then kills them once ingested,” Krizek said.

While some manufacturers may claim their balloons are biodegradable, most balloons biodegrade very slowly. According to Wildlife Center of Virginia officials, balloons can take months to years to fully break down. As they break down, wildlife can mistake small latex and plastic pieces for food and choke on them or die from eating them.

Balloons have chemical components, plasticizers and artificial dyes which can have adverse environmental impacts.

Seabirds, wading birds, raptors and other birds can get entangled in balloons, especially in their strings or ribbons. This can impair the birds’ mobility, feeding and other behavior.

Ed Clark, president of the Wildlife Center of Virginia, summarized: "The bottom line is, these things get out there and there're no good consequences."

One balloon can travel thousands of miles, reports a University of Michigan study. A balloon released in Ann Arbor, Michigan, was found five days later in Pine Knob, Kentucky, 430 miles away. Balloons, balloon ribbons and fragments can come down in the forests, streams, fields, backyards, anywhere.

What goes up, always comes down, somewhere.

To make events festive, there are alternatives to balloons, but everything has an impact of some kind. Several online party suppliers claim their products are “biodegradable” or “compostable.” Non-balloon options include bubbles, paper balls and pompoms, tissue paper balls, biodegradable confetti, flags and streamers. Colorful real leaves and flowers readily decompose, and could be the best choice.