Not only is trash polluting and unsightly, it is harmful, even lethal, to wildlife. 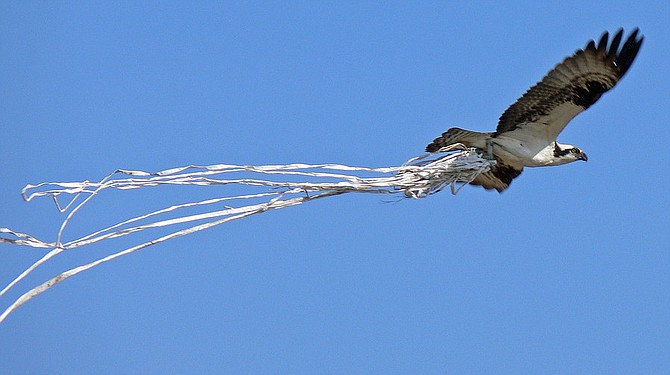 A Willet perched on a discarded tire. (Virginia Eastern Shore)

DIscarded cigarette butts at the corner of Sherwood Hall Lane and U.S. 1.

On April 10, 82 volunteers hauled 126 bags of trash out of Little Hunting Creek and 46 volunteers collected 55 bags of trash in Dyke Marsh and along the Potomac River just south of Alexandria. Those 181 bags represent merely two of 100 trash cleanups held that day in the river’s watershed.

On Earth Day, April 22, the Virginia Department of Transportation reported that nearly 75 percent of roadside litter comes from people who consciously choose to litter, at a cost to taxpayers of nearly $3.5 million annually.

Not only is trash polluting and unsightly, it is harmful, even lethal, to wildlife.

Larry Cartwright, Dyke Marsh Breeding Bird Survey leader since 1994, sees more and more human-produced garbage woven into birds’ nests, like a candy wrapper in a tree swallow nest, dental floss in a bluebird nest and a condom in a Baltimore oriole nest.

When animals eat plastic debris, its stomach can seem full and the plastic can lead to death. Turtles and whales mistake plastic bags for jellyfish, and if eaten, bags can block digestion. Necropsies have also found plastic bag remnants in the stomachs of dolphins, manatees, penguins and other birds.

Attracted to leftover morsels, small animals get trapped inside bottles and cans. Some may crawl inside for warmth and suffocate or starve when they cannot get out. Birds and other animals get entangled in six-pack rings and fishing lines.

Cleanup volunteers often target the visible items like beer bottles, aluminum cans and plastic bottles, straws and bags. They pick up balls, tires, fast food debris, Styrofoam pieces and fishing gear, but some trash is not so visible.

Polystyrene, known by the brand name, Styrofoam, from coolers, cups, trays and carryout food containers, breaks into pieces that end up in storm drains and waterways. Birds, fish and other animals mistake the small pieces for food. When ingested, polystyrene can cause fatal internal blockages in animals’ organs and cause starvation or choking. Polystyrene products are rarely recycled or composted.

Stormwater runoff whisks cigarette butts off streets into area waters. Cigarette filters are the top item of 20 found by Clean Virginia Waterways volunteers. Most cigarette filters are made of cellulose acetate, a plastic that degrades slowly, says Kathleen M. Register, the organization’s head. Cigarette butt plastic has been found in the stomachs of fish, birds, whales and other marine animals.

Reducing trash in the environment requires disposing of it responsibly or not using the products in the first place.

Betsy Martin, who’s led Little Hunting Creek trash cleanups since 2002, said, "We truly appreciate our legislators’ efforts to adopt laws to reduce trash and Fairfax County’s efforts to prevent litter, with the trash trap in Little Hunting Creek and Operation Stream Shield, but there's still too much. We hope the litter goes extinct before the wildlife does."