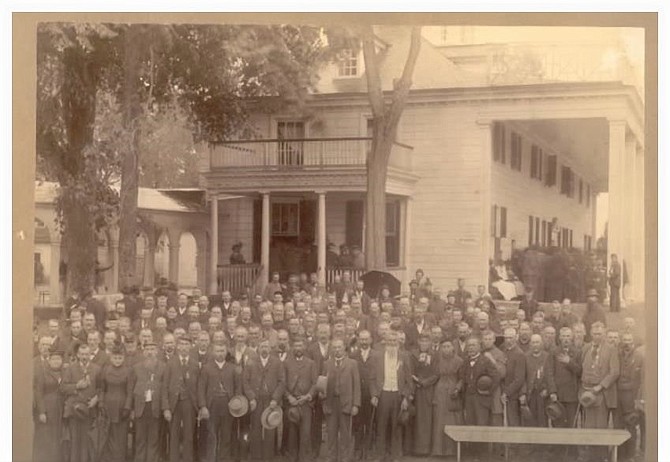 Civil War veterans gathered on the steps at Mount Vernon.

In an attic somewhere in Kansas, a Civil War descendant found a picture of a gathering of Union veterans on the steps of the Mount Vernon plantation. Many questions arose to the finder, who found the picture while cleaning out her grandparents house, so she reached out to “Maureen Taylor: The Photo Detective,” who uncovered a slew of things about the picture including the fact that the great grandfather survived being shot at 32 times and lived to pose at Mount Vernon. “It became a story about the Civil War and his remarkable story,” said Taylor.

It turns out the man’s name was Jessie Sturm, and Taylor picked him out in the photo, and while dodging the 32 shots, he hid behind a tree. “I think she had one of the bullets he dug out of the tree,” Taylor added.

Taylor has used her degree in history, and some self-taught photo skills, to build her business, finding stories like this all over the place. “People come to me with all kinds of mysteries,” she said. “Families are not aware of the history and this is a good example of that,” she said.

The Photo Detective business started when she had the position of a curator at a historical society. People would come to her with photos and questions, so her skills evolved over time. Now she investigates many situations a month. She’s working on another book called “The Last Muster, Volume III,” where she is going back to the Revolutionary War to find veterans that lived to have their picture taken.

Photography became available to the public in 1839, and some of the veterans from the Revolutionary War were still alive at that time, including a Mount Vernon resident by the name of John Gray. Her investigations showed that Gray lived from 1764-1868, and Taylor found his photo at the Library of Congress, and learned that I.N. Nolton was the photographer. His story grew from there.

As part of her investigation into photos, she looks for the clothing and hats to find a link or a timeframe that the photo was taken. Other knowledge about the person unravels from that.

One picture she investigated was of a little boy in a costume, as it appeared, and she referred to it as an “unusual outfit,” around the 1890s. This is no homemade ghost costume or fangs from the corner drug store. “I’m pretty sure he went to some sort of costume party,” she said.

And then there was a photo of her own grandparents, with her grandmother in a big floppy hat, which drew her attention. Up until then, Taylor had only seen pictures of her grandfather in later life, but in this picture, she could tell how much he looked like her father.

“Very touching to me, only photo I have of him at a younger age,” she said.

Taylor has been sought out on talk shows, and she is a frequent speaker on photo identification, photograph preservation, and family history at historical and genealogical societies, museums, conferences, libraries, and other organizations across the U.S., London and Canada. This includes shows like "The View," and "The Today Show." She’s been featured in The Wall Street Journal, Better Homes and Gardens, The Boston Globe, Martha Stewart Living, Germany’s top newspaper Der Spiegel, American Spirit, and The New York Times. She is a contributing editor of Family Tree Magazine.