Acting On a Tip Leads Deep in the Woods 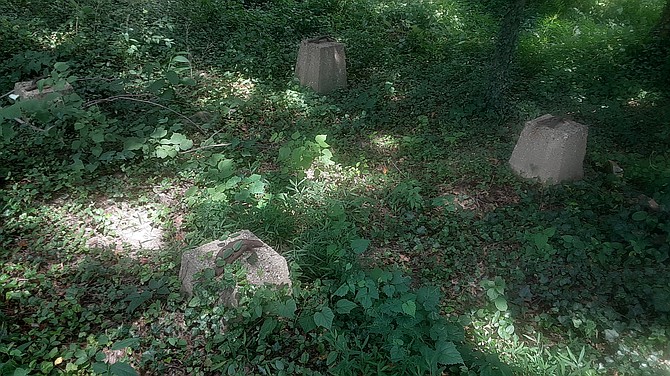 In Fort Hunt Park, there appears to be structures left over from the electric trolley. Photo by Mike Salmon.

In today’s fast-paced communications world, a news tip shouldn’t be ignored, especially when it comes to something in Mount Vernon that’s remained a question. This was the case with any remaining traces of the old electric trolley that ran between Old Town and the Mount Vernon Plantation over 125 years ago.

This trolley line was built in 1892 and operated on the land that is now the George Washington Memorial Parkway, and ran between Pennsylvania 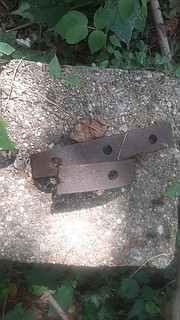 These brackets may have secured the trolley tracks at one time.

Avenue in Washington, D.C. and Old Town from 1892 to 1932. There is no sign of the trolley left, and when the investigative story was run in the Mount Vernon Gazette last year, this reporter wore out his gumshoes trying to find an old rail, station remnants or a resident along this corridor that dug something up in the backyard vegetable garden, but no luck.

Then the tip came in.

According to the source, there were the remnants of a station in the woods off the Mount Vernon Bike Trail just south of Morningside Lane, which empties into the parkway about four miles north of the plantation, north of Fort Hunt. Just get on the trail at Morningside Lane, walk a bit south, he said, and look in the woods and you’ll see these cement pillars that held up a platform – easy enough, it seemed.

Once on site, it was a different story. For one, the trail is on the east side of the parkway at Morningside Lane. There was a patch of woods here, so a hidden location for this structure was possible, but it was not to be found. Most of the residents along Ridgecrest Drive and West Boulevard Drive in this area had never heard of the trolley, and they were open to hearing about the story, but only at a distance.

After rummaging through the bushes and poison ivy, batting the underbrush for snakes, it was obvious it would take a stroke of extreme luck to find anything. Defeated, I jumped back on the southbound lanes of the parkway but decided at the last minute stop at Fort Hunt Park. Maybe one of the park police officers who ride around on horseback knew about it.

At first, the answer was no, check the website, and then talk to a local historian about it, but nothing here at the park. Then a light bulb went on – there’s a weird, cement thing in the woods near the last parking lot, he said, and it might be what you are looking for.

So the gum shoes were put back on, and off I went.

Those woods were full of more poison ivy and snake hiding spots, but there they were four concrete pedestals with rail brackets that were bent over to secure a train rail, or so it seemed. So the train remnants are a reality. I snapped a few pictures, looked around for snakes, and forged on to the next one-hundred-year-old mystery.