Dog Rescued from Abandoned Well at Norwood School in Bethesda 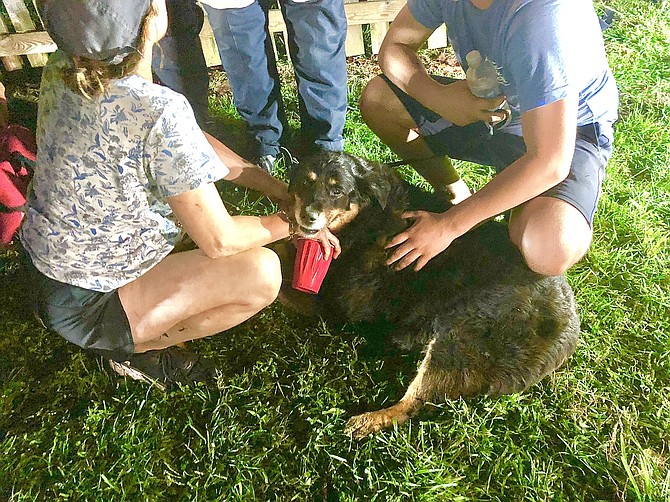 The large 80-pound-plus lab mix after being rescued from falling into an abandoned well on the grounds of the Norwood School Saturday night. Photo from Pete Piringer via Twitter 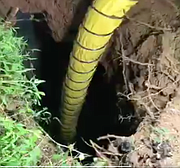 The opening to the well at the Norwood School during the rescue of the dog.

There was a robust rescue response to rescue the 80-pound-plus lab mix dog from an abandoned well at the Norwood School. This is about a third of the personnel visible on the scene in other photos.

In the TV shows, Lassie was usually the one alerting the adults that a child had fallen into the well.

Saturday night, July 24 around 10 p.m., a call came in about a dog who had fallen into an abandoned well on the grounds of the Norwood School.

The owner was on the scene; the 80-plus pound lab-mix dog had wandered from home and fallen 10-20 feet into the well. Cabin John rescuers put in the call for the Spec Ops Technical Rescue Team and Animal Control personnel.

After stabilizing the situation, including pumping air down the opening to provide support for the dog, responders put a ladder down into the well so a rescuer could climb down and carry the dog out. The dog was injured but appeared to be set for a good recovery.

The well was in a heavily wooded area behind the main school building.