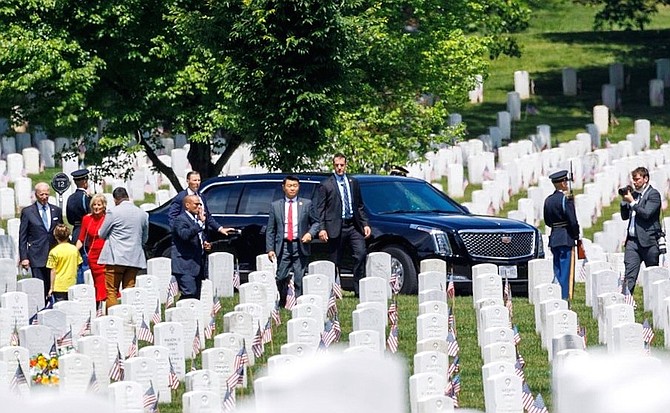 President Joe Biden and First Lady Jill Biden visit Section 12 of Arlington National Cemetery following Biden’s Memorial Day remarks and wreath laying at the Tomb of the Unknown Soldier May 31. Section 12 is one of the primary burial locations of service members killed overseas and repatriated to the United States after World War II and the Korean War. Photo by Mark Mogle. 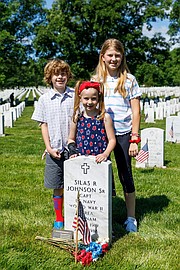 Rory Mogle, 9, with sisters Norah, 7, and Sarah, 10, mark Memorial Day with a visit to the grave of their great grandfather, Captain Silas Johnson, in Section 60 of Arlington National Cemetery. Johnson served in World War II, Korea and Vietnam. 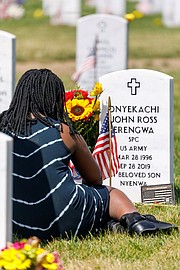 A woman reflects at the grave of Onyekachi “J.R.” Erengwa in Section 60 of Arlington National Cemetery May 31. 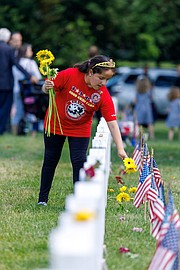 A member of the TAPS Good Grief Camp places sunflowers at graves in Section 60 of Arlington National Cemetery May 31.

President Joe Biden leaves Arlington National Cemetery May 31 following his Memorial Day address and wreath laying at the Tomb of the Unknown Soldier.

President Joe Biden honored the nation’s fallen military during a visit to Arlington National Cemetery May 31, marking Memorial Day by placing a wreath at the Tomb of the Unknown Soldier.

The president was joined by first lady Jill Biden, Vice President Kamala Harris and second gentleman Doug Emhoff in the dedication to deceased service members whose remains have not been identified. Defense Secretary Lloyd Austin and Mark Milley, chairman of the Joint Chiefs of Staff, were also in attendance.

“This nation was built on an idea, the idea of liberty and opportunity for all,” Biden said. “We’ve never fully realized that aspiration of our founders, but every generation has opened the door a little wider. We owe the honored dead ... our full best efforts to perfect the Union for which they died."

Due to ongoing COVID-19 precautions, the assembled crowd was sparse and restricted to invited guests.

“Generation after generation of American heroes are signed up to be part of the fight because they understand the truth that lives in every American heart: that liberation, opportunity, justice are far more likely to come to pass in a democracy than in an autocracy,” Biden said. “These Americans weren’t fighting for dictators, they were fighting for democracy. They weren’t fighting to exclude or to enslave, they were fighting to build and broaden and liberate.”

Following the ceremony, the Bidens made a visit to Section 12, one of the primary burial locations of service members killed overseas and repatriated to the United States after World War II and the Korean War. More than 400,000 service members are enshrined at Arlington National Cemetery.