At Highs and Lows in Hybla Valley, behind the door with five knobs, local artists and Pac Man scream nostalgia. 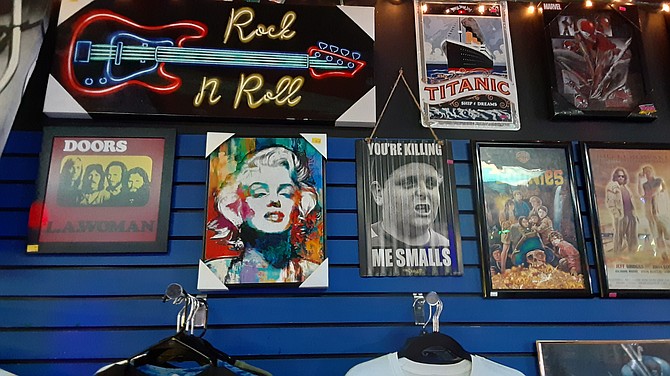 The Highs and Lows Gifts and Thrifts store in Hybla Valley offers a blast from the past.

Behind the counter, all calls to the “Highs and Lows Gifts and Thrifts,” shop are answered on a Mickey Mouse phone with push button dialing, one of the many throwbacks in the latest Mount Vernon gift store along Richmond Highway. A look inside is a flashback to 1987, or somewhere around there.

“We’re trying to bring back the nostalgia,” said a new employee Alex Blas, an alumna of Hayfield Secondary, which is right down the street. 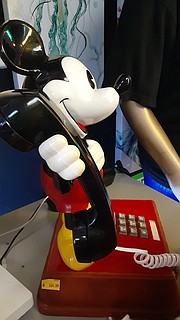 The store phone is a Mickey Mouse phone with push button dialing, straight out of the 1970s.

The walls are covered with pictures, action heroes, tee shirts, and artwork from local artists. There’s even a Pac Man game that still works, and they let shoppers sit down and play a few games, as they mentally travel back to that time. Behind the counter is what looks like a Pepsi Cola vending machine, but it’s really the front of an old machine that now acts as the door to the employee area in the back.

This was the brainstorm of the owner, who goes by the name “Fresh,” who got the idea from a show like “Get Smart,” or the original Batman shows where the bookshelf magically swings open when a certain trick book is touched. They also put five doorknobs on the front door- another one from a 1970s sitcom.

“You can’t take it all in on one sitting,” Fresh said of the store. The idea is to link his shop with the up-and-coming pop world that teens are into, and the surrounding community.

One of the artists they feature is a woman named Ju Ju, who they discovered selling her art in the parking lot about a block away from the store. Now they are displaying several of her works, alongside other locals. “Another artist came from the Great Southern Tattoo shop,” right down the street, Fresh said.

Fresh is a child of the 1980s and 90s from Los Angeles and there are signs of the west coast all over the shop. “It brings in a new kind of flavor to our area,” he said. 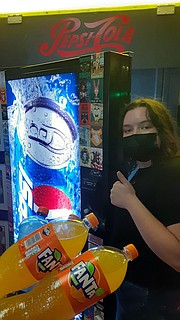 In the back, a front panel to an old soda machine acts as the door to the employee area in the back.

One way he gives back to the community is cleaning up the street litter out front. The store is only about 40 feet from the southbound travel lanes of Richmond Highway, and it gets litter on a daily basis, but the folks at the store try to keep it in check. Looking after the environment is another mission they have, and he rides his skateboard to work when he doesn’t feel like driving.

Highs and Lows Gifts and Thrifts

When dealing with nostalgia and the new generation, the internet plays a big role, and Blas said this is where many see the old toys, figurines and tee shirt designs that are on sale at the store. Take the Rocky Horror Picture Show tee shirts they sell, with Frankenfurter on the front for example. Does anyone remember him singing “Sweet Transvestite,” in the 1977 movie? Possibly not, but they have seen him online, and that’s what hooks the new fans. “More old school stuff is coming back,” said Blas, “anything that is related online,” he added.

They’re big on Instagram too, and recently started a Facebook page, but even Facebook is taking on an “old school,” feel around the store. The Mickey Mouse phone is on its way out too. Fresh found an old pay phone on a trip to Richmond, and will soon have it hanging on the wall, wired to the store’s line for business calls.