Flurry of proposed revisions should discourage pursuits of suspects in non-violent felony incidents.

Aftermath of the inside the Djama family minivan after a truck pursued by FCPD slammed into it in Herndon, leaving their 12-year-old-daughter with brain damage. Screenshot

The schedule of feedback on FCPD revisions to revise its vehicle pursuit policy. 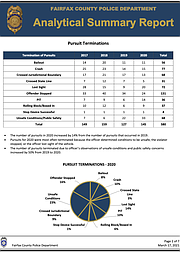 Police vehicle pursuits create the potential for officers, residents and suspects to be killed or seriously injured. With the primary mission of the Fairfax County Police Department (FCPD), to protect and serve the community with awareness of the sanctity of all lives, officers and supervisors must first determine the reason for a pursuit. Especially in an urban county like Fairfax, when does a pursuit present more possible danger than benefit?

If a pursuit is in progress, officers and supervisors must balance the risks and extenuating factors of when to terminate a pursuit dependent on public safety, possible use of a tactic to stop the fleeing vehicle, and when to call off the pursuit.

FCPD is asking community, stakeholder, and officer feedback to assist with a policy revision now underway, but police have declined to form a committee of stakeholders.

According to FCPD's Analytical Summary of Report 2020 of pursuits, the department reported a total of 580 vehicle pursuits involving FCPD officers from 2017-2020, including the one that critically injured 12-year-old Amran Djama of Herndon on Dec. 27, 2017.

AMRAN rode with four other children in the family minivan that evening, driven by her mother, Filsan Duale. As their vehicle entered the signalized intersection of Centreville and Frying Pan Roads, carjacking suspect Brandon Stefon Vinson, 28, of Adelphi, Md. led FCPD officers in a vehicle pursuit with the department's helicopter assisting overhead. Vinson drove a pickup truck with an attached trailer through the red light at the intersection. The truck collided with the minivan, and the impact ejected Amran from the vehicle. She went through a window and landed on the road.

"Fairfax 1, our helicopter, which assisted with the pursuit, immediately landed after the crash so the crew could assist with the injuries," stated a Dec. 28 FCPD post. The police report added that the suspect was taken to the hospital with non-life-threatening injuries, "the driver and four of the five children hospitalized with non-life-threatening injuries," but the child ejected from the minivan had been flown to the hospital and remained in critical condition.

Amran, the child flown to the hospital, remained in a coma for two weeks, according to a Washington Post story on Mar. 5, 2018. By March, Amran was learning to walk again. She faced a long rehabilitation and was unlikely to fully recover. Arman lost an eye, and life is not easy for the teen.

The family later moved out of the area, too traumatized by seeing the area of the crash, said Moustapha Djama, Arman's father, in an interview on Sunday, June 13, 2021.

Moving traffic violations (not including speeding) were the number one reason in the last four years for Fairfax County Police to initiate pursuits, according to the department's Analytical Report Template - 2020 pursuit analysis. Various other reasons spurred pursuits such as speeding, stolen auto, DWI, suspicious event, and more. FCPD reported police pursuits yearly totals for 2017-2020 at 149, 159, 127, and 145, respectively.

On June 10, members of the FCPD Pursuit Policy Review Committee hosted a virtual town-hall meeting to promote public awareness and collect community feedback on the policy initiative. As of April, FCPD had tasked Major Bob Blakley, Commander of Patrol Bureau Division II, to lead efforts in revising the department's General Orders on Pursuits. The goal was to draft a new policy for consideration, which valued human life's sanctity and responded to police, community, Board of Supervisor, and stakeholder feedback. The new policy should be embedded in national and regional best practices and clarify supervisory emphasis. The tentative release is later this month or next month, July 2021.

According to Blakley at the Jun. 10 community town hall on the policy, he impaneled a “dream team” made up entirely of members of the FCPD, 27 commanders, supervisors, and police officers of every rank in April 2021 to serve on the Pursuit Policy Review Committee, part one of the five-part process reviewing the policy. No community members were invited to serve on the committee.

Blakley recalled that officers said the current policy was "ambiguous" and "too long for a policy that they're expected to understand,” more than 40 pages. "We wanted to add an emphasis on supervision and leadership … that held all people accountable," Blakley added. Underpinning all pursuits and as written in the 2019 revision, the new General Order must balance "the need for immediate apprehension with the danger created by the pursuit as the preservation of all human life is paramount."

On May 25, the FCPD Draft Police Pursuit Policy Revision came before the Fairfax County Public Safety Committee Meeting, including all members of the Board of Supervisors. At that discussion, Supervisor James R. Walkinshaw (D-Braddock) questioned the vague language that put officers in a "very difficult position of weighing the potential risk of a pursuit versus the threat that's posed."

Chief Kevin Davis answered, "The tenor of this draft-in-progress is to make sure the burden is not on the shoulders of the police officer."

Davis said such would require an "awfully serious set of circumstances."

Supervisor Dalia A. Palchik, Providence District, said there was a need for a written narrative to help understand the policy.

At the June 10 Town Hall, Blakley presented a couple of the slides shown to the Supervisors in May. In addition to deleting multiple reasons to initiate a pursuit, Blakley said that the new policy defined pursuit differently.

"We believe we need to chase for violent felonies … and crimes of violence against persons," he said. The draft-in-progress limited vehicular pursuits to when there was a reasonable suspicion a violent felony had been committed and that there was a potential for imminent risk to public safety and/or injury to individuals if a pursuit was not initiated.

The new policy aligned with the regional best practices of the six nearby jurisdictions, including Arlington, Alexandria, and Montgomery. "We looked at model programs from IACP [International Association of Chiefs of Police] and other law enforcement programs," Blakley said. For example, the old policy did not differentiate between pursuit and an initial refusal to stop.

"Sixty-three percent of all police vehicle pursuits nationally end in crashes," Blakely said at the town meeting. He did not provide the number of police vehicle pursuits in Fairfax County that end in crashes. According to the March 17, 2021, FCPD Analytical Summary Report, "Pursuits Termination" in 2020, 10 percent of FCPD pursuit terminations ended in crashes, a total of 15 out of 145, down from 25 such crashes in 2017.

"The number of pursuits terminated due to officer's observations of unsafe conditions and public safety concerns increased by 50% from 2019 to 2020," according to the Summary Report. "If we dive into the statistics, our supervisors forcibly terminate a great number of pursuits today," Blakley said. He described supervisors taking weather, pedestrians, and other factors into consideration.

According to FCPD General Order 504.16.II [pg 42], the department established a Pursuit Review Committee as part of the 2019 revision. "The Committee is to provide a report to the Chief of Police through the Director of the Criminal Justice Academy annually concerning FCPD pursuits for any "trends including driving behavior of the officer and the fleeing suspect, needed safety and tactical improvements [and], needed changes to policy."

Closing his presentation, Blakley listened to community concerns 'to make sure we're not missing something." Provide comments, ideas, or suggestions by visiting https://bit.ly/3whNU9g.

A video of the June 10 Town Hall can be viewed on Facebook.

A- Blakley said based on that one scenario; none would be pursued. He later added pursuits are planned in the revision for "violent" felonies that would endanger others.

Q- Gabriel Goldberg said that reckless driving, aggressive driving, not stopping at red lights is rampant. "Once this policy is known, why would any of the people who are already driving badly stop for a police car when they see the lights come on … and they won't get pursued …You won't pursue for felony theft …They won't stop. It's not a free “get out of jail card” because they won't be getting to jail.

A- Law enforcement and the community have to work together to achieve the objectives that members of our community want. Violators can be apprehended by other means.

C- Otis Langford: "Do any of these policies give the officer the right to bump a car, to knock them off the road?"

A- Blakley said the department had various tactics, a PIT, pursuit intervention technique, TVI, tactical vehicle intervention, and others. "Every one of these is allowed under the current policy."

C- John Cook, former Braddock Supervisor, said that there appeared to be a misimpression when Blakley said FCPD was not going to pursue. "My understanding is that you simply mean that the police are not going to initiate a vehicle pursuit at this time … but you are going to seek to investigate and bring anyone violating the law to justice."

Q- Rick Avila questioned how FCPD would investigate at the backend of incidents rather than pursue. "You don't have the people to barely cover shifts."

C- Diane Burkley Alejandro said some community members who might not want to comment on Zoom would be affected by these types of policies.

A- Blakley said, "I can't recall when we've conducted a similar session like this… We've broadcasted this to the public so folks would know how to contact the police department … If anyone has members of the community that would like to get in touch with us, we welcome that."