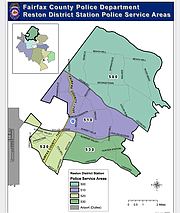 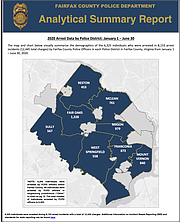 Leadership at the Fairfax County Police Department, Reston District Station are "very proud" of their work but acknowledge there is more work to come. "We want to ensure we are completely transparent and ensure the community's trust," said Station Commander Thea Pirnat during the Virtual Town Hall hosted by Hunter Mill District Supervisor Walter Alcorn (D) on Tuesday, Feb. 16. The hour-long event featured Alcorn's introduction focused on proposed County policing options, followed by Pirnat's review of trends and statistics and Assistant Commander Lieutenant Marc Mitchell's overview of officer training. It ended with a question-and-answer period. Alcorn said that there had been much in the news about policing over the past year, and a number of issues related to policing had come to the Board of Supervisors for consideration. Alcorn described his Joint Board Matter: Request to Review the 9-1-1 Dispatch and Response System to Enhance Division First Strategies that he and Lee District Supervisor Rodney Lusk (D) introduced. Alcorn shared that some calls to 9-1-1 did not necessarily involve criminal activity but were instances of mental and behavioral health crises.

Alcorn said, "Should we be sending… folks who are experienced to deal with these types of mental health or behavioral crisis or perhaps be able to approach them in a little bit different way other than Fire and Rescue or our uniformed police."

"Fairfax County is one of the safest communities in the entire nation to live," said Pirnat. "Our crime rate is three times below the national average…(and) we have one of the lowest ratios of police officers to the general population."

"I do think some of those extra calls for service were related to the fact that individuals weren't able to get their normal service provider, contact that they had prior years, due to the pandemic (and) due to telehealth being implemented," Pirnat said.

Overall, Pirnat considered that Reston maintained a "very safe atmosphere," even though she acknowledged a September 2020 homicide remained an active case. It involved the Sept. 17 shooting of 19-year-old Iris Ponce Garcia that took place in the area of Colts Neck Road and Glade Drive. In another Reston homicide, the Feb. 10, 2021, deadly shooting of Samuel Onyeuka in the 2300 block of Branleigh Park Court, police arrested a man within days.

Pirnat said they had been getting "a lot of calls in particular that are causing concerns for sounds of what are gunshots and that causes obviously a great deal of tension."

IN RESPONSE to a recent community meeting, Pirnat said the Station launched (on Jan. 4) its RESET initiative, the Reston Engagement and Safety Enforcement Team. Pirnat described it as a blended team composed of officers from patrol and bike, a detective and a community engagement officer to communicate with community members, building rapport and trust while increasing visibility and suppressing crime.

Pirnat recognized that police work is a changing profession. "We will continue to evolve. There's always room for growth and improvement. Fairfax County prides itself on being a role model on how to do it right…Our goal has always been to use voluntary compliance and not use force." Pirnat said chokeholds had not been used for 20 years and are prohibited. Their pursuit policy had been revisited.

Assistant Commander Lt. Mitchell provided an overview on the process to become a Fairfax County police officer, a position he described leading to "public trust" for individuals whose backgrounds are honorable, law-abiding and ethical. The Academy is a 6-month training period where individuals are taken from recruits to sworn police officers. They then serve in a probationary capacity under the direction of an FTI (Field Training Instructor), where the newly learned skills are given real-life experience in the community. Once they pass that, they become a senior officer.

The hour-long meeting is recorded and posted on Alcorn's YouTube channel for public viewing.