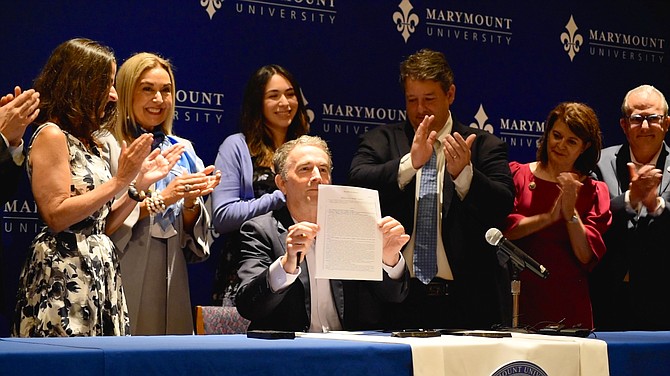 This legislation will go into effect in August 2022, and makes Virginia students eligible for state financial aid if they are eligible for in-state tuition in the fall of 2022, regardless of citizenship or immigration status.

On Monday, June 14, Virginia Gov. Ralph Northam visited the campus of Marymount University to hold a ceremonial bill signing for House Bill 2123 and Senate Bill 1387 in the Reinsch Auditorium.

This legislation, which will take effect in August of 2022, makes Virginia students eligible for state financial aid if they are eligible for in-state tuition in the fall of 2022, regardless of citizenship or immigration status. At private institutions like Marymount, this will allow Dreamer students the ability to receive financial assistance through Virginia’s TAG program – increasing higher education access and opening the door for more students to achieve their goals and aspirations.

“These students have grown up in our communities across Virginia. They’ve attended the same schools as their classmates and neighbors, they have taken the same tests, they have played on the same teams, eaten in the same lunch rooms and even gone to the same dances,” Northam said. “They are valued members of our communities, and they are Virginians in every sense of the word.”

A Marymount student who will gain access to TAG funding spoke during the ceremony about the importance of the legislation, and why it will be meaningful to her on her academic journey. Karla Mercado Dorado, a sophomore studying Biology on the Pre-Med track, came to the U.S. at the age of two from Bolivia. She told the audience about the challenges she faced during her college search as an undocumented student, and how opening access to the TAG program puts Virginia on the path to becoming a more progressive and inclusive Commonwealth.

“You’re told that if you work hard, if you do everything right, you’re bound to succeed and you’ll get to where you want to be. Unfortunately, for undocumented students like myself, we can work as hard as we want and there will always be these barriers,” Dorado said. “So, the signing of this legislation really means a lot to me and to other students that I know who want to get an education.”

Dr. Irma Becerra, President of Marymount University, is a Cuban-born immigrant who related that her family left Cuba with nothing.

“This legislation will prove how Virginia is leading the way in the nation in helping students realize their dreams of access to postsecondary education by providing Tuition Assistance Grants to students attending Virginia’s independent colleges or state-supported financial aid if they’re attending a public institution,” Becerra said.

“But I did have the opportunity to get Pell Grants and tuition assistance when I went to college, and I will fight forever for students to have the same opportunities that I did when I came to this country.”

In attendance at the event were several Virginia state lawmakers, including Sen. Jennifer Boysko and Del. Alfonso Lopez, the lead sponsors of the bills in the Commonwealth’s Senate and House of Delegates, respectively.

“Virginia is better when we have a higher educated community,” Sen. Boysko said. “We have the high-tech, 21st century jobs – we want to make sure that everybody has an opportunity to participate in that, because we know there are many jobs that are unfilled.”

This legislation builds upon bills that were signed into law in 2020 that allow Virginia students to receive in-state tuition regardless of immigration status.

“With this, Virginia finally fulfills the promises and investments we’ve made in these students from kindergarten through high school,” Del. Lopez added.