Walking on grounds where slaves worshipped, and Confederates camped 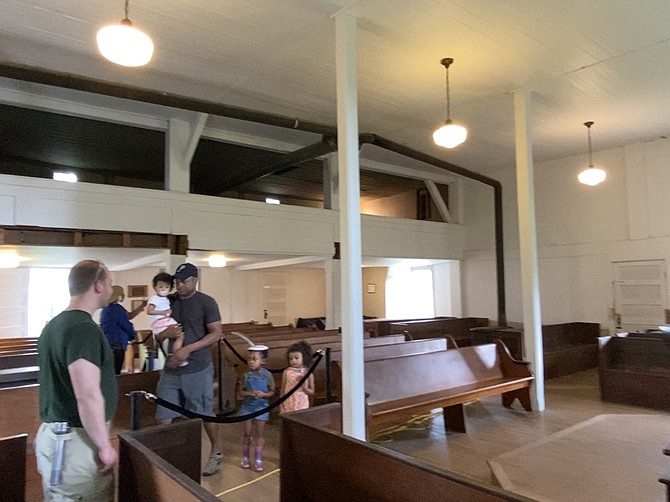 The inside of the Frying Pan Spring Meeting House on Centreville Road with one of the intact galleries where Black members of the congregation sat, segregated from the white members who sat on the main level. Photo by Mercia Hobson.

The history of the Meeting House. 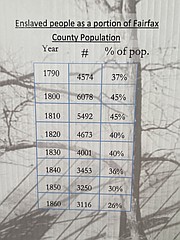 Enslaved people as a portion of Fairfax County Population. In the early 1800s, nearly half of the County residents were enslaved. By the time of the Civil War, the number decreased to slightly over 25 percent.

The Friends of Frying Pan Farm Park sponsored its inaugural Juneteenth Celebration on June 19 at Frying Pan Spring Meeting House on Centreville Road. While generally not open to the public, the integrity of the historic 230-year-old Meeting House and its adjoining springs, baptismal pond, grounds, and cemetery proved an appropriate location for the celebration.

According to a marker on the site, the Meeting House attracted local farmers, free blacks, and slaves. “Blacks were listed as members, baptized in the springs behind the meeting house and interred in the adjacent burial grounds.” No tombstone markers for Blacks are visible in the cemetery today.

A County spokesperson said that the Meeting House was the first interracially mixed congregation in Virginia. “Everyone was welcome, but it was segregated...White people sat downstairs and Black people in the galleries.”

Visitors to the site wandered through the Meeting House and around the cemetery. One of the most looked at items was the learning boards. One board cited enslaved people as a portion of Fairfax County’s population. In 1860, slightly over one in four people were enslaved.

Another drew two children, Clark Braxton, 10, of Reston and her brother Ethan,12. “I just read this sentence and didn’t learn that in school,” said Clark. The sentence referenced told the story of Fairfax County residents Sarah Greene and her children, “free black Virginians.” “Despite her status as free, a man took two of Sarah’s children by force into slavery in the Carolinas.”