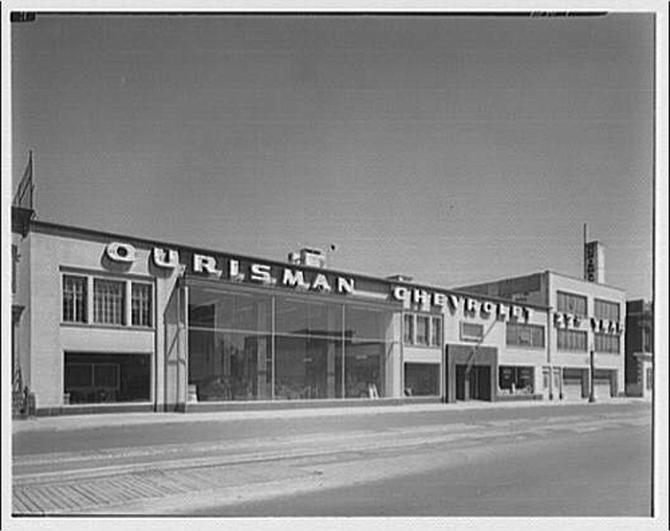 Michael Bennett in 2014 with then Lee District Supervisor Jeff McKay, where he was recognized as the Police & FireFighter Tribute “Founding Sponsor.”

100 years is a long time for any business to successfully keep their doors open for the public. Our local Ourisman Automotive Group is celebrating their 100th anniversary in 2021 and we congratulate them for reaching this milestone.

A recent study found that the average lifespan of companies listed in Standard & Poor’s 500 was 61 years in 1958. Today, it is less than 18 years. By some estimates, in 2027, 75% of the companies currently quoted on the S&P 500 will have disappeared. They will be bought out, merged, or will go bankrupt.

Ourisman’s story started in 1921 when Ben Ourisman, a D.C. local, opened his first car dealership, Ourisman Chevrolet in the heart of Washington, D.C. Ben was 18 years old, and this was an ambitious undertaking for one just starting his adult years. With lots of hard work, Ben made a successful business.

Ourisman Chevrolet had to close briefly during World War II when the war effort changed domestic production of automobiles, but as soon as possible after the war, Ben got the store opened again and went on to open a second store in Anacostia, Mandell Chevrolet, named after his son. By the late 1940s, Ben Ourisman’s automobile stores were two of the most successful dealerships in the country.

When Ben Ourisman passed away, the business leadership was safely in the hands of the next generation. His son, Mandell, expanded the business and then Mandell’s sons and stepsons divided and conquered the Washington, D.C. Metro area.

Danny Korengold, a step-son, brought the Ourisman name to Richmond Highway when he opened Ourisman Chrysler Jeep Dodge in 1978 and then Ourisman Ford in 1982, along with other dealerships in Fairfax County.

Life-long resident of the Groveton area of Richmond Highway, Michael Bennett is the Chief Financial Officer and Partner with the Ourisman Automotive Group. Michael has worked to increase local business opportunities and has championed revitalization of the Richmond Highway corridor.

His first job in the automotive industry was at age 13 at a gas station on Beacon Hill. In 1983 he went to work for the Ourisman automotive group at the Ford store on Richmond Highway and then took over the Dodge store three years later. Bennett also opened the Suzuki store on Richmond Highway in 1986 and the Ourisman Chevy store next to the Dodge store in 2010.

Bennett has been actively involved in local youth sports as a coach, official, and organization leader. He serves on the Board of Directors for Good Shepherd Housing and Family Services and the Mount Vernon Lee Education Partnership. Since 1990 Michael has been a National Automobile Dealers Charitable Foundation Ambassador.

Bennett has been involved with the Mount Vernon Lee Chamber of Commerce for at least 40 years. The Chamber recognized him in 2014 as the “Founding Sponsor” of the annual Police & Fire Fighters Tribute and the 2016 Chamber Citizen of the Year.

Michael Bennett is an outstanding businessman and a community builder. Under his leadership, the Ourisman dealerships on Richmond Highway employ more than 600 people, making a significant contribution to the county’s tax base with their retail sales and service departments.