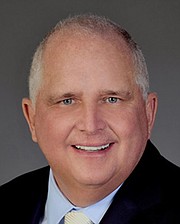 Michael Bennett, CFO and partner with the Ourisman automotive group, is the Chamber Citizen of the Year for Mount Vernon-Lee Chamber of Commerce.

Bennett is a lifelong resident of the Groveton area where he was raised five houses down from the former Dixie Pig BBQ on Beacon Hill. He was worked to increase local business opportunities and has championed revitalization of the Richmond Highway corridor.

Bennett is also a community volunteer whose service is focused on helping children, the less fortunate, and providing educational opportunities.

He started work at the age of 10 delivering papers for The Washington Post. He started work at Joe Gill’s service station in Beacon Mall at age 13 and then worked at the Hess gas station on Telegraph Road to pay his tuition to Bishop Ireton High School.

From this beginning Bennett went on to provide leadership for a string of successful automotive dealerships. He opened the Ford store on Quander Road in 1979. In 1983 he went to work for the Ourisman automotive group at the Ford store on Richmond Highway and then took over the Dodge store three years later. Bennett also opened the Suzuki store on Richmond Highway in 1986. Then he opened the Ourisman Chevy store next to the Dodge store in 2010.

Bennett has been actively involved in youth sports. He helped start the Woodlawn Football League where he coached for nine years, including two Metropolitan Super Bowl team champions and one semi-finalist team. He also coached at Woodlawn Little League for eight years with a state champion 12-year-old team. He has been a volunteer umpire and basketball official for Woodlawn leagues.

He serves on the Board of Directors for Good Shepherd Housing, the Mount Vernon Lee Education Partnership, and is a member of the Bishop Ireton Board of Governors. He is a past board member of the Southeast Fairfax Development Corp. (SFDC). He was appointed by the Governor to the Virginia VEDP Board.

Since 1990 Bennett has served as a National Automobile Dealers Charitable Foundation Ambassador.

Bennett has been involved with the Mount Vernon Lee Chamber of Commerce for 40 years. The chamber recognized him in 2014 as the “Founding Sponsor” of the annual Police & Firefighters Tribute. He is a strong supporter of community policing and helped create the Mount Vernon District Police Station’s bike program.

Bennett is married to his wife Niki and has three daughters, Michel, Kelly, and Tracy, and five grandchildren.