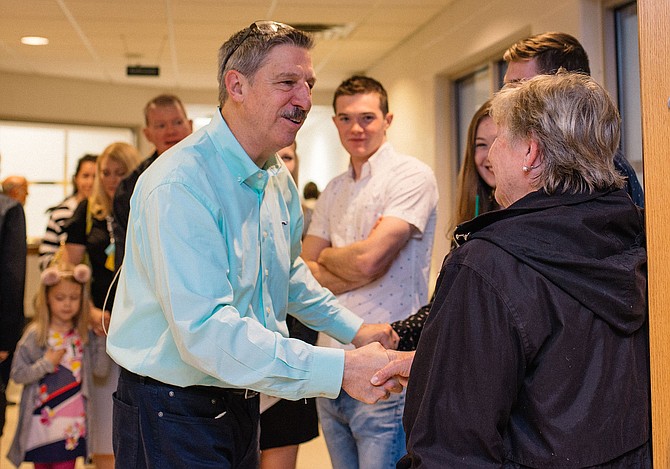 Retiring after more than three decades as pastor of Centreville Presbyterian Church (CPC), Rob Bromhead’s final day there was last Sunday, Feb. 28. The congregation hopes to give him a proper sendoff in October; but meanwhile, some members shared their thoughts about him with The Connection.

“He baptized my four sons,” said Jenni Aiello, a member since 1991. “He cares about people like a friend; and when speaking with him, he makes you feel like you’re the most important person. When he preaches, he comes across as genuine. Often, you feel like God is speaking to you and it’s something personal you needed to hear. He’s devoted his whole life to being a pastor, and caring for people is a 24/7 job, so I’m excited for this new season in his life.”

Her husband Steve said the Holy Spirit “comes through in [Bromhead’s] sermons. He interprets Scripture and applies it to real life and to where he feels the Spirit is leading the church.”

Mitch Kirsch, a 31-year member, called him a “gifted preacher who often used visual aids – even a chainsaw – to augment his sermons. And noting Bromhead’s affection for his two Airedale dogs, Kirsch said, “You can tell a lot about a person by his relationship with his pets.”

When they first met him, said Kirsch’s wife Jane, their cat rubbed his face against Bromhead’s socks. So, she said, “We say our cat picked him as our pastor. He’s a real and honest person who shows his passions and emotions. He can be funny or serious and is a good listener. We’ll miss him, but we wish him well – he certainly deserves it. We hope he and his wife will enjoy this new chapter.”

ANOTHER 30-YEAR MEMBER, Nancy Anthony appreciated how Bromhead taught the stories in Scripture and said he’s “walked through some of my family’s milestones, including meeting my husband. Rob was the one who married us, and we both sang together in the choir.

“We had difficulty starting a family, and we consulted with Rob and he prayed for us. We eventually had twins, and he was the first to visit them and congratulate us. They’re now teens, and he’s still keeping us in his prayers. He’s a servant leader; and when I was on the Elder Board, he got us back to common ground whenever we had a disagreement. “We’re going to miss Rob and his wife Nancy.”

Attending CPC since January 1987, Janet Merritt said the members become like family. “I feel like Rob is my brother and my brother in Christ,” she said. “Many times, I thought he was preaching just to me, saying what I needed to hear. And he helped the church transition from one location to another.”

Recalling a poignant memory from years ago, she said, “We had a Sunday School kickoff with stations each representing a Bible story. Rob, dressed as Jesus, spoke about the Last Supper and was down on his knees, washing our feet. It brought tears to my eyes that he’d humble himself to do that. It was such a powerful example for all of us.

“I understand it’s time for him to have a rest, but I’m sad because he’s been such an important part of my family’s life for decades. But at least, I’ll still get to see him on the pickleball court. He’s impacted families for generations, and I know he couldn’t have done it without the support of his own family.”

Director of Missions Sharon Hoover, also at CPC for 30 years, said, “The person Rob is on Sunday mornings is the same person he is in his private life and with the staff. It’s the Christ-centered life he leads. He was passionate about the community and having it know Christ, and I appreciated his steadfastness. It showed a faithfulness to the people and to God that Rob was willing to walk through even the difficult times with us.”

She said Bromhead baptized her children and performed her son’s marriage, so there are deep roots for her family. “And being on staff with him, he didn’t micromanage, but encouraged creativity and allowed the space to make mistakes and learn from them,” said Hoover. “He’s open to new books and resources and learning from others. He’s always willing to try something new, and I’ve enjoyed working in that environment.”

Concerned that the church transitions well, Bromhead reminded everyone of his coming retirement, the last couple years, said Hoover. “Having Co-Pastor Aaron McMillan here, this past year, demonstrates Rob’s incredible leadership and humility,” she said. “He let Aaron make some of the decisions, and it’s been a good way for people to get to know him.”

JULIE BURKE joined CPC when Bromhead did, in October 1989. “I liked Rob and what he had to say; no other pastor is like him,” she said. “When my dad visited, he noticed the teens and tweens in church were really listening to him. Rob resonates with every age group and pays attention to everyone, engaging them all on their own level.”

She recalled one time when the youth group was watching a movie inside the church and Bromhead joined them. “I see popcorn flying through the air, and it’s Rob tossing popcorn to one of the teens,” said Burke. “He’s a kid at heart, fun to be around, and the kids really love him. He’s a grandfather now, but he’s still like that.”

Overall, said Burke, “Rob’s been a phenomenal shepherd to his flock – he’s led us well. People are resonating with the new pastor, so the church is in good hands. Rob’s shoes can’t be filled, but we’ll continue.”