Some residents got emotional as they walked into the community center. 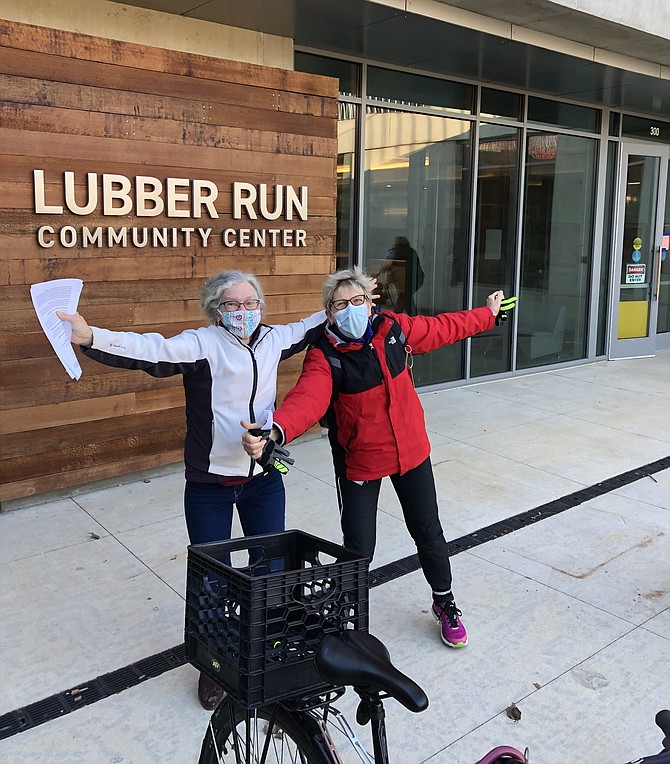 The reporter joins Karen Gerstbrein in jumping for joy after the jab at Lubber Run. Photo by Eden Brown. 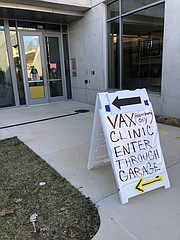 Arlington County did not allow any photographs or recorded chats with volunteers.

”Smoke got in my eyes” as I walked into the Lubber Run Community Center for my Johnson and Johnson vaccine. Yup. It was emotional.

The vaccine seemed a long time coming, and when I got the Arlington notice inviting me to schedule a vaccine, I jumped on it. The appointments were all booked except for the Johnson and Johnson Lubber Run clinic. Johnson and Johnson wasn’t my first choice; I didn’t sign up immediately, preferring to check my daily (fruitless) effort to get CVS, Safeway, and Walgreens websites to respond. I’d been up at 6 a.m. checking websites all over Virginia, even thinking I’d drive to Abingdon if I had to. But when I told my public health doctoral student daughter I could get the Lubber Run J and J jab, she didn’t mince words: “Get the one you can get the fastest.”

So there I was on Saturday, after parking effortlessly in the garage, being led by volunteers with red and green paddles (stop and go) and others in blue vests with blue signalling lights, as though we were planes landing on an indoor airport runway. It was so well run, and gave me such a sense of support from my county government, that, like I said, I got emotional. I was just beyond my 7th Covid test by then. I’d watched my mother get Covid - long distance of course - and die. I’d been on a careful regimen of no social contact to speak of for a year. I had had enough. But what caused me to choke up wasn’t the sense that the shadow of doom brought by Covid would be gone, or a sense of relief that life would snap back to normal. It was that the incredible American institutions of science, research, free enterprise, community, and county and state government were working hand in hand to deliver me from evil.

I wasn’t the only one. Karen Gerstbrein was literally dancing for joy as she left the Lubber Run Center, jumping up and down in jubilation. Irrepressible. She agreed that walking into the center had caused her to get a little emotional. It was the excellent organization of the effort and the relief at knowing that Covid-19 was now not likely to cause her to be hospitalized, or worse. She too had been on countless websites with no vaccine appointment in sight. And then, suddenly, you are on the runway. No one realizes until the vaccine plunges in just how desperate they have been for a sense of relief.

It’s important to note there are after effects from the vaccine. As one friend said, “It’s like menopause. No one tells you how bad it is and you are completely caught off guard.“

Well, it’s not that bad. And while not everyone gets after-effects, I felt quite incapacitated for a day. It felt like I had the mosquito borne “breakbone fever” where the whole body feels as though it’s been beaten up, and I had no energy to do anything. Headaches, fever, fatigue. But I realized it was a good sign that the vaccine was working, and I almost revelled in the aches and pains. I also read that one should not take painkillers before or after the vaccine even if side-effects seem rough — a nap will do the trick. And a word to the wise, don’t drink alcohol. It seems to aggravate the side effects.

Janice Kraft of Arlington told neighbors, “For those folks interested in the side effects of the J&J COVID vaccine... Many of my Harris Teeter coworkers and I received the J&J vaccine on Friday. According to our pharmacist, it was about a 50-50 split between people who had significant side effects and mild-to-no side effects. I personally had no fever, very light cold sweats, and a general low energy the day after. Others had temps up to 103, aches, migraines/bad headaches, and/or major chills. The good news is that, to a person, all side effects were gone by the 2nd day.”

Photos were off limits at the Lubber Run, and volunteers said they had been asked not to talk to anyone about the event. That’s too bad, since Arlington County deserves all kinds of praise for their COVID vaccine effort. School nurses who had been seconded by Arlington County’s Public Health office after schools closed were on duty at Lubber run to jab residents; as has often been the case during COVID-19 tests, there were Virginia Medical Reserve Corps volunteers in the observation room where vaccinated individuals could wait to make sure they had no allergic reaction to the shot.