Westfield High School's production of ‘4 A.M.’ represented the unspoken stories realized in the midst of the night. 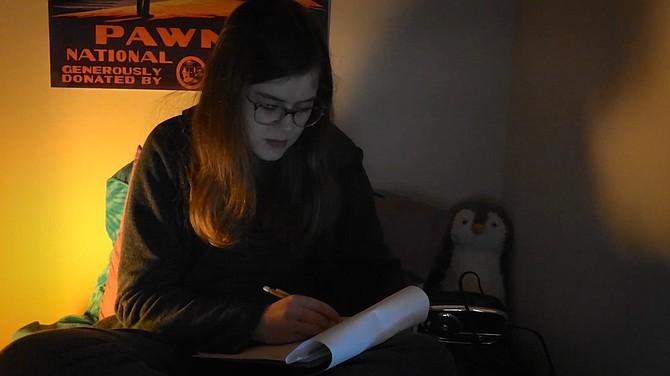 Things seem different at 4 A.M., don't they? Some have the motivation to exercise whilst others have philosophical thoughts. The nighttime silence brings out the best, and worst, in people, and their inner monologues shine through the darkness. The play "4 A.M.," written by Jonathan Dorf, emphasizes these themes and highlights the nuances of this magical hour.

Westfield High School's production of this play represented the unspoken stories realized in the midst of the night. Frankie, a radio DJ with an audience of close to none, would dedicate his early hours of the day to his radio show that just so happened to save Jane's life. At the same time, literally, two friends, Monica and Anne encountered tests to their friendship during their virtual sleepover. A modern day Romeo and Juliet pondered the question "to call or not to call", while Sleeper Kid finally confronted the monsters under her bed. Among several other teenagers, this play focused on the questions and answers sought while the world was silent.

All actors in this production gave extremely authentic performances that made it seem as if one was recording their actual thoughts at 4 in the morning. Though filmed virtually, the chemistry displayed by all actors created the illusion of watching a genuine FaceTime call or viewing an actual conversation between two people. The technical elements, from the lighting to the editing, created a cohesive and engaging play, and the passion poured into this production from the cast and crew was clearly evident.

Even through a screen, Frankie's (Brian Purtell) excitement towards his radio show was apparent while Jane's (Zoe Brennan) more somber yet grateful approach to his show displayed the intricate depths and dark sides to her character. Monica and Anne, played by Payton Kuhlman and Rachel Neil respectively, had extremely contrasting characters that utilized their history together to create discernable chemistry. Monica's exhausted energy complemented Anne's hyper personality to create a yin and yang duo.

The editing, sets, and lighting, executed by Rachel Neil and Krishna Purohit, enabled a well-balanced narrative with no dead air. FaceTime calls looked like FaceTime calls. The clean editing between scenes pulled the story together, through the use of zooming in and out of windows to view separate scenes and monologues. The sound effects and music scores that were used complemented the drama unraveling onscreen. When a character had an epiphany, the music would reflect that tone. The lighting made each room look as though the time was actually 4 A.M., and the visual editing utilized clipart images, animation, and the work of Neil to create the illusion of paranormal beings flying around Sleeper Kid's room.

Although the world may seem distant and far away these days, tales like "4 A.M." remind us that the world is more connected than we think. From strangers to close friends, someone is always out there. Maybe stay up past your bedtime to find out who.