‘Hey Stranger’ tackles the question everyone struggles with during pandemic 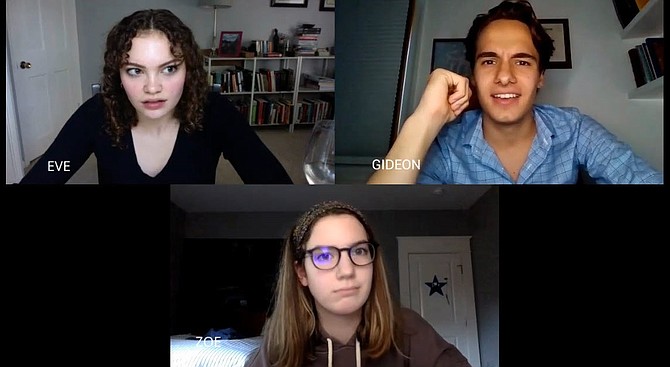 In a time where the pandemic has isolated humanity, how does one find solace? In perfect Zoom fashion, Langley High School's production of “Hey Stranger” tackled the question with which everyone has struggled.

Written by Steph Del Rosso, the play revolved around two high school sweethearts reconnecting after many years apart. From their initial awkwardness and, of course, technical difficulties, both Eve and Gideon reflected on the different paths their lives have taken since the end of their relationship. When the call is crashed by the vocal teenager and tutee Zoe, the trio erupted in chaos due to contrasting viewpoints and clashing personalities. With only three roles, the captivating production illuminated the various impacts of isolation and the loneliness that accompanies it on individuals.

With her hair styled neatly and a wine glass by her side, Eve (Hannah Toronto) was eager to reconnect with her presumably divorced ex-boyfriend. When the screen focused on just her for monologues, Toronto's expressions and pacing put meaning behind every line, highlighting the "kind of lonely that's infuriatingly mediocre" her character was experiencing. Yet, as an argument ensues, Toronto gracefully demonstrated how one's view of isolation can shift. At the beginning, through Toronto's realistic nervousness and inner monologues, she revealed how Eve, like many individuals, struggled with isolation. But as the story progressed, Toronto perfectly encapsulated Eve's shifting view of how isolation acted as an opportunity to reflect, relax, and find comfort in the peace found in being alone.

On the other side of the screen leaning back in his chair was Gideon (Cole Sitilides). While leading Eve on through his flirtatious manner and supposed divorce, Sitilides portrayed a successful chiropractor yearning to reconnect; yet throughout the play, Sitilides revealed Gideon's selfish acts to benefit his business and his belittling words to boost his ego. When the intelligent teenager Zoe (Claire Stephenson) joins the Zoom call for a tutoring session, the two clash, forcing Eve to be stuck in the middle. With her slight slouch and mannerisms, Stephenson embodied an outspoken teenager who does not tolerate sexist and demeaning remarks. Altogether, the three actors' pacing, witty remarks, and dynamics allowed for the production to be very realistic.

In addition to compelling performances, the technical aspects were equally amazing. Whether it was Zoe's practical bedroom setting, where most teenagers are doing their schoolwork, or Gideon's abstract painting hung on his wall, the set and props in each frame fully depicted each character. Moreover, the subtle technical elements highlighted their characters. At the start, Sitilides' camera was lower while Toronto's camera was higher, already signaling the power Gideon had over Zoe. Additionally, the contrasting lighting, Eve's cooler light and Gideon's warm lighting tone, furthered their dynamic. Along with accurate costumes, the technical elements added to the reality of the production.

Truly making the best of the app that everyone has become a little too familiar with during quarantine, Langley High School's production of “Hey Stranger” revealed that once one comes to terms with isolation, one can find the good in it. In isolation, one can observe the majestic trees of the woods, smell the moss, hear the thump of a tree falling, and feel the solace of finding oneself.