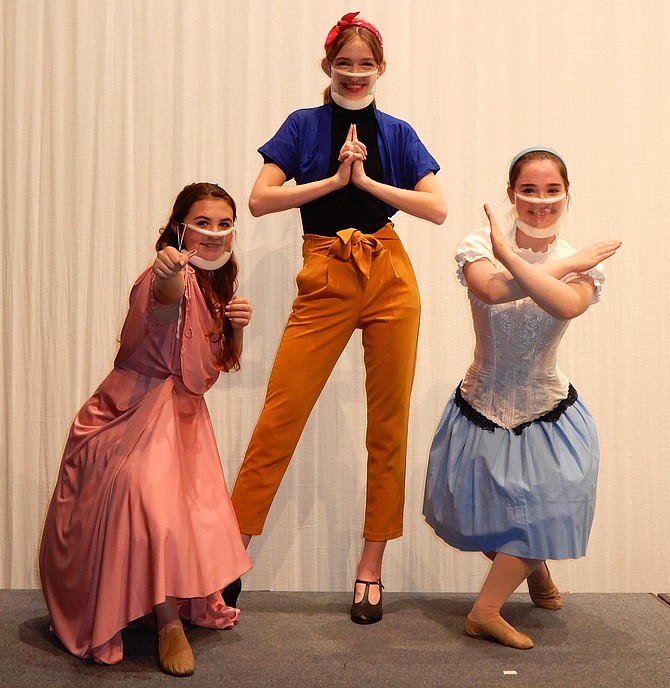 If the Disney princesses could tell people what they really thought about their lives, what would they say? That’s the premise of Centreville High’s musical, streaming May 7-8, at 7 p.m., and May 9, at 2 p.m. For ticket information and the show link, go to https://www.theatrecentreville.com/wpa/.

Since it’ll be shown online, the students’ performances are being filmed and edited, and the sound layered on, just like a movie – which is way more work than an in-person show. They’re also working with a new director, Christie Blewett, who replaced the retired Mike Hudson and is the school’s first-ever female theater director. But she and they are up to the task.

“We’ve never done this before – there’s no guidebook,” said Director Christie Blewett. “And yet, you can’t stop these kids. They’re fearless in their creativity and bold in facing any challenge. And their camaraderie offstage became a catalyst for helping them shine onstage.”

THERE’S A CAST AND CREW OF 25, and scenery for the musical vignettes was filmed at various locations. “They’ve come up with all these creative solutions, and I’m really proud of them,” said Blewett. “Audiences will love seeing a new version of their favorite, Disney tales, with a message they didn’t realize they needed to know.”

Senior Brianna Reeves plays Belle from “Beauty and the Beast” and said most of the princesses sing one song each, plus participate in group numbers. Belle’s song is called, “Insane,” and, said Reeves, “She’s talking about how Disney changed her story to make her seem crazy. She went from a character in classic literature to someone who talks to inanimate objects and falls in love with a beast.”

Reeves loves that song because “It’s a full-cast number, the music is lively and the choreography energetic. This show is creative and funny; and especially at this time, people will enjoy seeing a show again, even virtually. We’ve all enjoyed acting again.”

Portraying Snow White is senior Caroline Jareb. “She’s a mature leader, controlling and confident in who she is, as an individual,” said Jareb. “She’s finding herself after being a Disney princess. She and the others have learned that being a princess isn’t as enchanted as it seems – it’s more disenchanted.”

“It’s fun playing her,” she continued. “And audiences will like the show’s comedy, singing and entertaining dance numbers.”

Sophomore Josie Puckett plays Sleeping Beauty. “She’s spunky and loud and doesn’t want to follow the norm for a princess,” said Puckett. “She’s had to meet expectations of perfection but, when she sings the song, ‘Perfect,’ she learns she’s perfect as she is. She can make mistakes and be herself. And in today’s age of social media, it’s important to not copy anyone else, but to love and be yourself, instead”

Puckett said audiences will enjoy “seeing Disney flipped on its head. The princesses [dispel] society’s expectations about them and show that’s not the way they really are.”

Sophomore Evan Williams is in the ensemble, dancing and playing various roles, such as a prince who falls off a boat and has to swim offstage. “It’s enjoyable because of the community here and the way the cast members support each other,” he said. “And we improve with each rehearsal.”

PORTRAYING CINDERELLA is sophomore Katie Wood. “She’s a vibrant soul,” explained Wood. “But she’s so consumed by the ‘Princess Complex’ that she feels she needs to be perfect. Inside, she knows that’s not who she is, but Disney put her in the spotlight so much that she’s trapped. In the song, ‘All I Want to Do is Eat,’

I sing about Cinderella being so pressured to be thin that she can’t enjoy eating.

I’m ecstatic to play her; I love characters breaking out of their shells and not being stereotyped.”

“Theater’s my passion, so I’m excited to be back onstage,” added Wood. “Audiences will like how honest this show is, plus the heart and dedication we’ve put into it, in such a hard time.”