Ramadan Warms a Chilly May in McLean and Arlington
Votes

Ramadan Warms a Chilly May in McLean and Arlington

A Ramadan primer: different traditions, but a unifying month 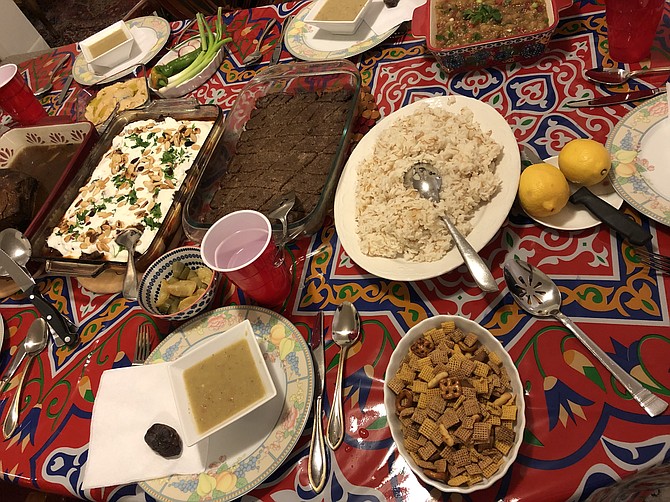 Another Ramadan spread on the first night of Ramadan, with traditional Arab dishes like Kibbeh, and eggplant. Photo by Eden Brown. 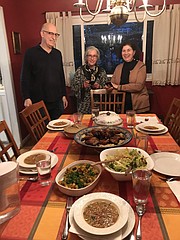 McLean residents Ahmed and Fayhaa prepare to eat an elaborate Iftar dinner with their host’s tagines on the special “Night of Destiny.”

According to what country you are from, Ramadan traditions vary, and sometimes, it’s just family preference. In one house, breaking the fast with a glass of milk to “line the stomach” is militantly adhered to. In another, it’s just water and the ubiquitous date. In some families, getting up at 4 a.m. to pray and have the morning Suhoor meal is the way it’s done; in other homes, the morning meal is skipped because “it just makes you hungrier.”

But some things never change: Ramadan is a time of kindness and charity. It is important to give “Zakat” (alms) to organizations in need of support, especially for the poor and sick. Some families decide to perform an act of kindness for every day in the month-long fasting period. It takes their minds off the hunger and allows more people to share in the spirit of Ramadan.

The idea of Ramadan is to go without eating or drinking all day so the person who rarely goes hungry can understand the person who often goes hungry. In addition, Ramadan is a time of self-reflection and focus on correcting one’s outlook. The very practice of blocking out food for 13 or more hours encourages a spiritual take on the day and many use the time to keep a journal or read the Koran in its entirety. Muslims rarely complain about going without food and water all day; it’s part of the challenge of Ramadan to do the fast without getting “hangry” or vocalizing to others how hard it is.

Until a person has fasted for Ramadan and joined others in Iftar, the meal which breaks the fast, it is hard to understand how unifying and powerful the month is. The community of “brothers and sisters” who sacrifice together and then seek each other out to end that day-long ache in the stomach is somewhat like Easter after Lent, or Yom Kippur, but neither is as intense as Ramadan.

In Morocco, the entire country fasts and at sundown, everyone rushes out the door to get home for Iftar, ignoring the stop signs so they won’t be late. In Sri Lanka, sunset prayers are held on a vast “maidan’ near the sea, and thousands of men are seen gathering there to pray every evening as the sun sets in the Indian Ocean.

Since 2001, imams in most mosques have gone out of their way to welcome non-Muslims in the mosque during Ramadan, and to interpret Islam for non-Muslims so misconceptions that circulate in the U.S. can be addressed.

The atmosphere of a mosque serving Iftar is joyous and warm; the diversity of the Muslim population in Northern Virginia is immense and many wear traditional dress during events at the mosque. But don’t expect to get a place in the mosque during the Eid al Fitr, the day when the fast ends. Like Easter, it’s a time when the mosques are more full than usual. Many congregants have to use the sidewalk and street to pray, and come prepared with mats.

Even Ramadan is prone to extreme interpretation. One on-line thread asked if it was okay to have a COVID-19 vaccine during Ramadan.

“Of course it is,” said Fayhaa. “God gives us the means to maintain our health and we have to take those gifts of medicine.” And cooking during Ramadan is tough because some believe you can’t taste while you are cooking. Others say the Koran allows for food to touch the tongue as long as it is not swallowed.

Most Muslims start fasting at the age of 10 or 11, anxious to join the family in their tradition. Some fast for only half a day to enable them to manage the first years. Most Muslims find the first three days of Ramadan difficult, but quickly acclimate to the new pattern of not eating or drinking water. Some even welcome it as “intermittent fasting” and hope to slim down. Ramadan traditions of special cookies, nutty sweets like “Sfouf” and gifts make it festive and fun, make slimming down harder.

Most importantly, families come together as they do for Thanksgiving, and those without families nearby are invited for Iftar so they won’t be alone. The Eid celebration is an important one, and it is entirely appropriate to wish a Muslim “Eid Mubarak” on that evening, which this year will fall on May 12 if the new moon is sighted… “inshallah.“