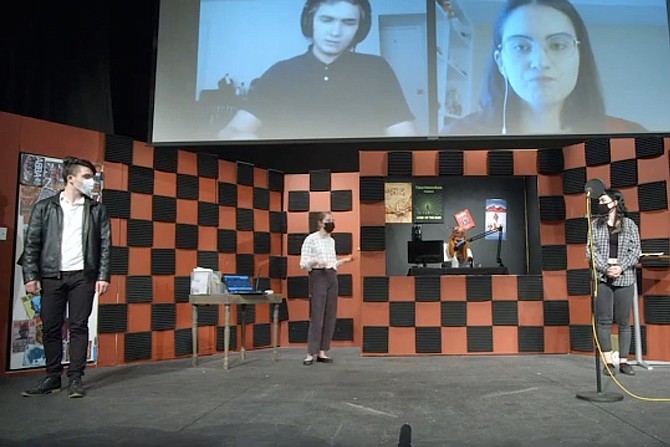 Picture this: you're driving down a long road with the wind in your hair. In front of you, you see a beautiful landscape filled with vibrant wildflowers and you can hear the birds chirping and...a radio ad about diarrhea? Following the hectic day of Annie in a sound studio, McLean High School's performance of Vocal Work was filled with jokes, slogans, and the strangest ads.

Vocal Work, written by Ed Monk, reveals just how busy a sound studio can get with a messed-up schedule. When Annie doesn't have her business partner and husband to help her, she struggles to cast a mattress ad, add the finishing touches to an interesting diarrhea ad, and listen to an awkward teenage girl attempt to sound sexy during a car commercial.

Waltzing through the door in a flurry of stress is Annie (Chloe Lahr). Either pacing across the room or leaning on her desk tensed up, Lahr gracefully depicted a frazzled boss. Lahr's crescendoed frustration throughout the performance added tension in the scene, eventually leading to her character's catharsis when she finally realizes that, while her job can be stressful, she loves fulfilling her passion. Contrasting with Annie's ball of stress well was Phil (Will Chapman). Remaining in the booth the majority of the performance, Chapman's depiction of the relaxed sound engineer added bits of comedy to the play. Moreover, Chapman always remained present in the scene, fiddling with items in the sound booth and truly placing the audience into the room of a studio.

Starting off the play with the stand-out word "diarrhea" was Peter (Graham Cole). Such an iconic line perfectly foreshadowed how Annie's day would go. Then, Annie gets a surprise visit from Alex (Lyssa Bass). When first reading the script, her blasé tone added to the hilarity of Annie's awful day. Then, Bass' awkwardness when attempting to sound sexy when stating basic car facts was hysterical. When Katie (Sanjna Kaul), Emily (Kaitlyn Whitsitt), and Meg (Avery Versaw) enter the room to audition for a mattress commercial, the actress' relationships shine through. Versaw's depiction of a new and naive voice actress contrasted nicely to Kaul's and Whitsitt's dynamic of experienced performers. All in all, each performer brought to life just how chaotic one workday can get.

However, such an amazing performance would have been incomplete if it were not for the phenomenal technical aspects. The set, designed and created by Vivian Kreeb, perfectly encapsulated a sound studio. Completed with colorful panels for the walls, with some overlapping from one set piece to the next to continue gracefully, as well as a sound booth for Phil to sit in, the set was excellently executed. Moreover, the small details in the set such as a hand sanitizer bottle and paper towels allowed the set and performance to feel more relatable. Another notable technical aspect was costumes, designed by Zara Kidwell. Throughout the play, each character wore a costume that captured their character's personality: with Annie wearing professional clothing and Alex wearing a sweater that came off as soon as she learned how to act for the car commercial, revealing her confidence boost.

All together, the cast and crew of Vocal Work reminded one of an important lesson: if you are following your passion the trials will always be worth it, no matter how chaotic your day is...or how strange the radio ads you hear are.