‘The Madness of Poe’ in Arlington
Votes

‘The Madness of Poe’ in Arlington 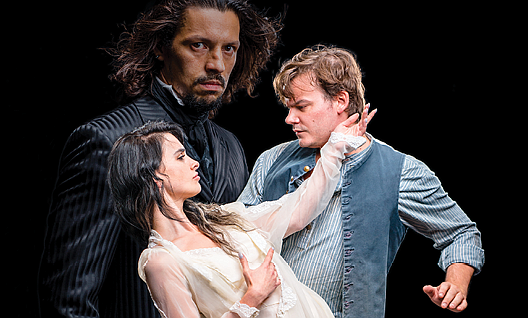 Ryan Sellers as Edgar, center, with Nutsa Tediashvili and Alex Mills in The Madness of Poe now playing at Synetic Theater. Johnny Shyrock 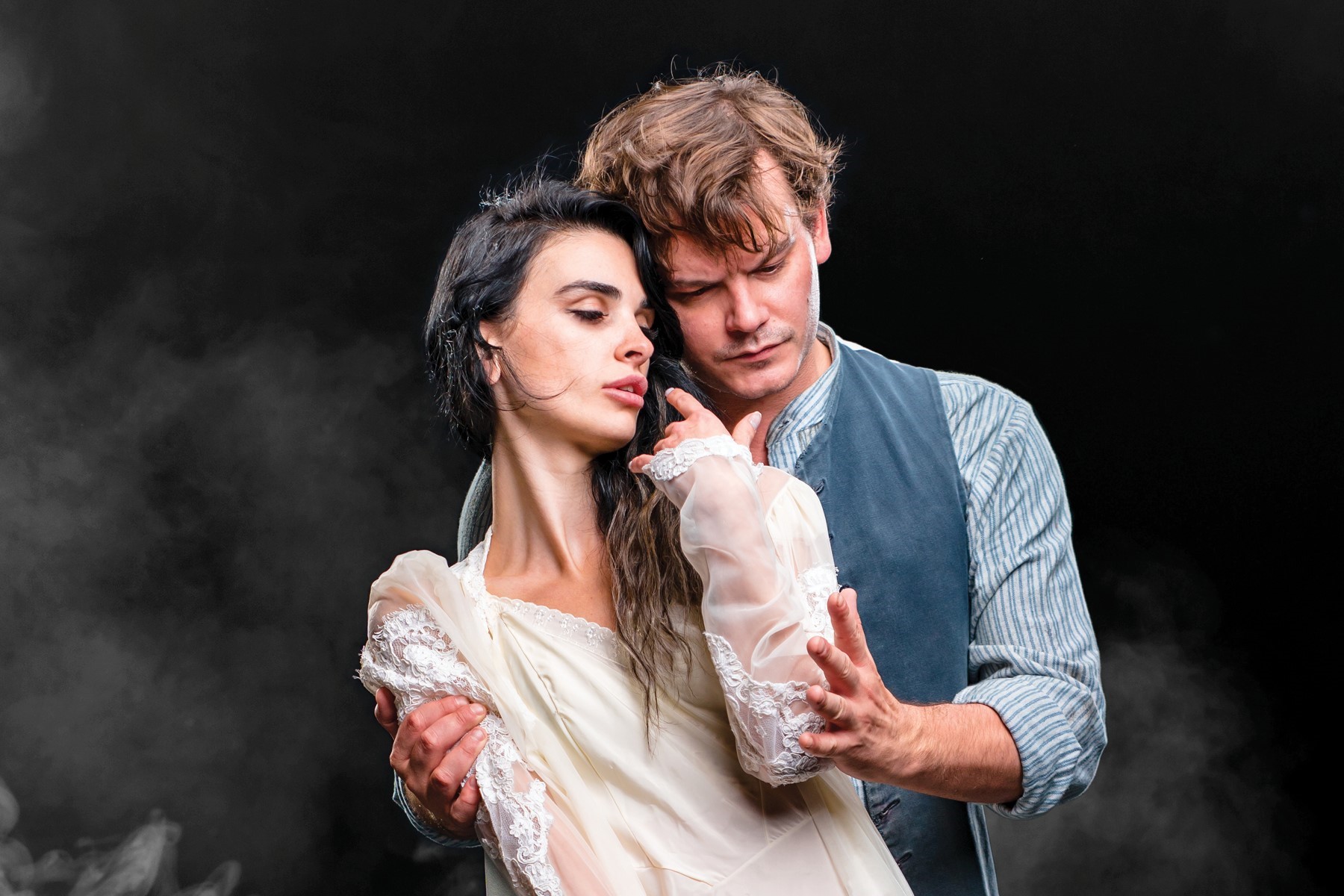 Synetic Theater founder Paata Tsikurishvili was greeted with enthusiastic applause as he welcomed the audience on opening night.

“The last year and a half has been a very dark time for so many of us,” said Tsikurishvili, before adding wryly, “so we thought we would return with something light.”

Directed by Tsikurishvili and choreographed by Irina Tsikurishvili, “The Madness of Poe” will play a limited engagement through Oct. 31.

“Like Shakespeare, Poe has become more than a writer,” Tsikurshivili said. “He has become an institution and genre unto himself and tonight we witness the moments before the pen touches the page. We watch how Poe, the inventor of American horror, created some of the most frightening and disturbing stories the world has ever known.”

“The Madness of Poe” fuses two of Poe’s most famous works -- “The Fall of the House of Usher” and “The Raven” – creating a bridge between his poetry and prose.

Anchored by a reimagining of Synetic’s 2007 hit adaptation of “The Fall of the House of Usher,” “The Madness of Poe” hauntingly blends the writer’s unhinged reality with the intoxicating imaginings of his stories, including “The Raven.” A talented cast brings the sinister tales to life in an evening of macabre suspense.

Ryan Sellers gives a riveting performance as Edgar, capturing Poe’s descent into madness over the course of the 90-minute performance. Fellow Synetic company members Alex Mills and Nutsa Tediashvili join Sellers as Roderick and Madeline respectively, with each taking command of the stage with spellbinding performances.

Rounding out the cast are Philip Fletcher as Servant, Maryam Najafzada as The Raven, Megan Khaziran as Lenore, and Chris Galindo, Scean Flowers and Ariel Kraje in the ensemble.

The choreography by Irina Tsikurshivili is powerful and precise, perfectly executed to an appropriately haunting score. The production features scenic and props design by Phil Charlwood, costume design by Alexa Duimstra, sound design by Justin Schmitz and lighting design by Doug Del Pizzo.

“The Madness of Poe” features mature themes including scenes of intimacy and drug use. If this were a movie, it would be rated PG-13. Proof of COVID vaccine is required, along with photo ID. The process is smooth and goes quickly, adding only a few brief moments to the check-in process. Audience members must wear masks, which can be removed when enjoying refreshments both in the lobby and the theater. Running time is 90 minutes with no intermission. 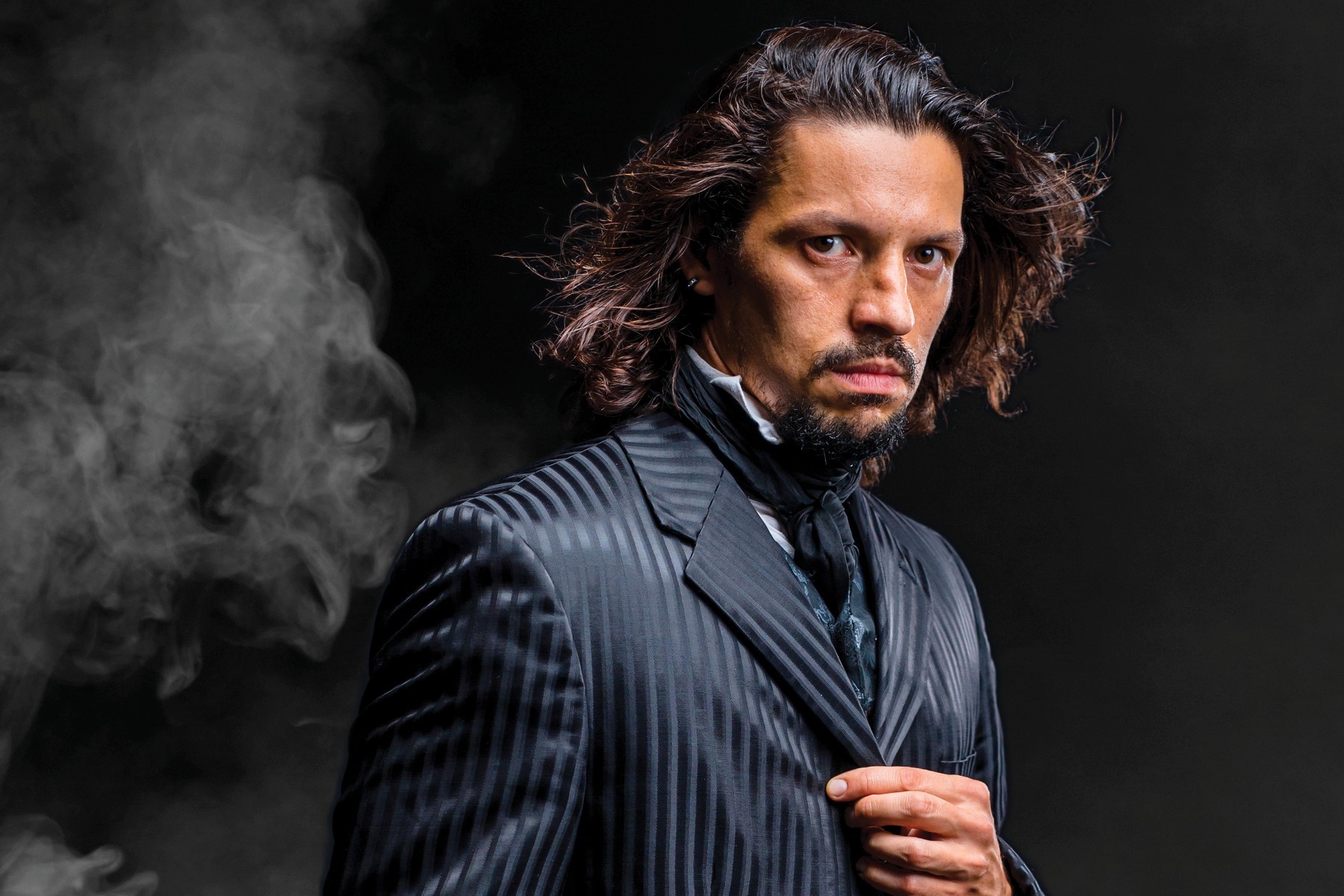 Ryan Sellers as Edgar in The Madness of Poe at Synetic Theater.

“The Madness of Poe'' will play a four-week limited engagement through Oct. 31 at Synetic Theater, 1800 South Bell Street in Arlington. Performances are Thursdays, Fridays and Saturday at 8 p.m. and Sundays at 2 p.m. Industry Night is Monday, Oct. 25, at 8 p.m. Tickets are $10-$60 and are available at www.synetictheater.org, in-person at the box office located in the underground Crystal City Shops, or via phone at 703-824-8060 x117.

“The tragedies of Poe’s life took the light from Edgar Allan Poe,” said Tsikurshivili of the author who died at the age of 40 under mysterious circumstances. “The result was a creative mind charged with terror, steeped in longing and filled with some of the bleakest humor ever written.”