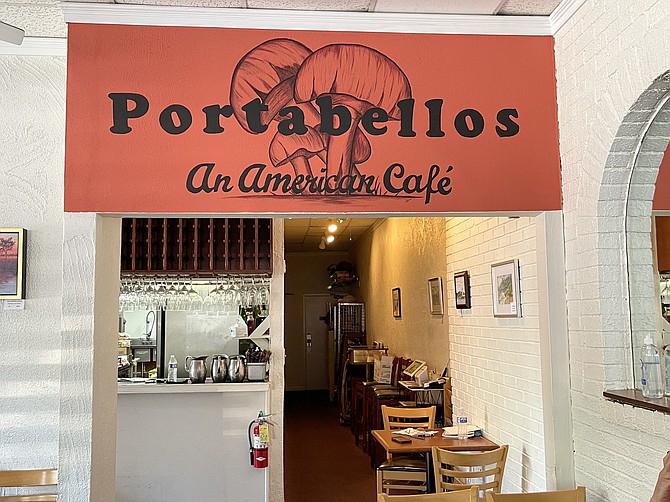 “We can do that,” M.J. Hussein answers his customer who has texted his cell phone. “I just ordered trout for another couple who come every 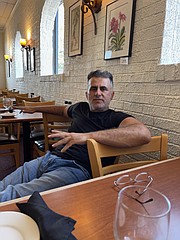 Thursday night and they mostly like fresh fish. And another lady wants fried oysters.” Hussein, owner of Portobellos at 2109 N. Pollard Street, has a lot of customers’ numbers on his cell phone.

Hussein says he just tells his customers to text him and he’ll get them their favorite. “I know them all when they come in, and I know what they want to drink and have it right in front of them.” He says about 75 percent of his customers get the same thing every week or say, “pick something for me.” He says it’s very family oriented. “Most of my clientele are between 60-85 years old.”

Hussein says the customer favorites on the menu are the fresh Alaska cod and the salmon. Things not on the menu, “I would say it’s the lamb chop.” He characterizes the restaurant as offering fresh ingredients, always consistent and with lots of great flavors.

But Portobellos is closing after 15 years, a victim of the pandemic and an unfortunate set of setbacks. Hussein has been in the restaurant business all of his life since he started as a dishwasher at 13-years-old. It’s all he knows. His parents had migrated here from Palestine in 1967.

Portobellos has grown into a neighborhood favorite. But everything happened all at once. First it was COVID and then the supply chain broke and then the prices skyrocketed. “It’s crazy how the prices are going up. Filet that used to cost me $12 bucks is $23. And crab meat—it’s been a nightmare.”

When coronavirus hit, it was a huge transition. “But we never shut down. We started doing carry out. Some customers put it on their neighborhood ListServe to get out the word.” He said business was good but never like when they had dinner in the restaurant. “We had just enough to pay the staff, food and electricity. But not myself.”

He says he still has the same people who have been loyal over these years. The chef is William Gordon. “I’m the waiter. I have a guy out here with me, a head cook and dishwasher. “

Last year Portobellos’ lease ran out. In one week Hussein had his dishwasher break. “That was $4,200.” A day later the ice maker broke. That was $2,200. “It’s a lot of money for a small restaurant when we make three cents on the dollar.” He had to borrow the money from his former wife.

Then there was a gas leak in the building. The fire department came out and found out the water heater was done as well as the hood system for the stove. “When all was over, it was another $5,000 we didn’t have.” He had gotten a PPP loan early on “but it went fast.”

Hussein said when the restaurants started opening back up, his carry out dropped by 50 percent. Although he opened back up in June 2021, the lease was up, and business hadn’t rebounded. So he made the decision to get out by the end of September so he would have time to sell all of his equipment. The staff who stay on to the end will get a percentage of what he makes.

The closing date is Sept. 25. “I’m very thankful for Arlingtonians or I wouldn’t have succeeded. I’m very sad to get up and leave.”

Customers have been stopping by to say goodbye and have one last meal.

“I have no complaints, no regrets. I’m a young man; I’m turning 50 in 13 days.” Hussein says he’ll get another job and have time to watch his high school daughters play basketball.