‘We need to work without the traffic in the way’ 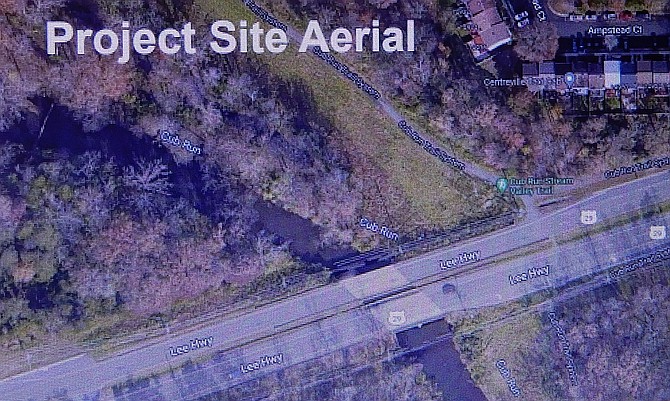 A view of where the bridge work is happening along northbound Route 29 over Cub Run in Centreville.

Work began in May to rehabilitate the northbound Route 29 bridge over Cub Run in Centreville to improve driver and pedestrian safety and extend the overall life of the bridge. And VDOT recently held an online meeting to update local residents on this project’s progress.

The bridge was built in 1954, and Route 29 carries an average of 26,000, combined northbound and southbound vehicles a day at Cub Run. So VDOT is doing some much-needed upgrades and repairs of this 68-year-old bridge.

“We’re building two new parapets, plus a new 7-foot-wide walking path,” said VDOT Construction Manager Reed Pinkney. “And the path will be protected by the parapets on each side of it.”

That news especially pleased Supervisor Kathy Smith (D-Sully). “When we first heard about this project, people wanted a path where they could walk,” she said. “So I’m happy to see that’s a part of this project.”

The work area runs from .15 mile east of White Post Road (in the vicinity of Gate Post Estates) to .08 mile west of Paddington Lane (near the London Towne community). The existing bridge is 40 feet wide and 68 feet long, with two equal spans. The northbound portion has two lanes and no sidewalk with a speed limit of 50 mph.

In addition to state and local money, this project is financed with federal, State of Good Repair funds used for maintenance of structures and bridges. Preliminary engineering is expected to cost $200,000, and construction, $3.6 million, for a total

The work is being done in three stages: first, the right side of the bridge, then the center and finally the left side. And all of it will happen within the VDOT right-of-way. The contractor is Martins Construction Corp.

Pinkney said the project will also entail some short, 6-to-8-foot lane shifts, back and forth. One already happened, and three others are slated for October, December and January 2023.

He said the plan is to maintain two lanes open in each direction during the traffic shifts. However, there may be occasional, single-lane closures, as necessitated by the work. “We have to do the shifts because the bridge is broken into sections,” explained Pinkney. “And we need to be able to work on each section without the traffic in the way.”

Construction hours are planned for 7 a.m.-3:30 p.m., with some night work. The project is anticipated to reach substantial completion by March 20, 2023, with a contract finish date of April 20, 2023. However, times and dates are subject to change, as a result of the weather or other unforeseen events.

Project updates will be available at virginiadot.org/Route29CubRun.