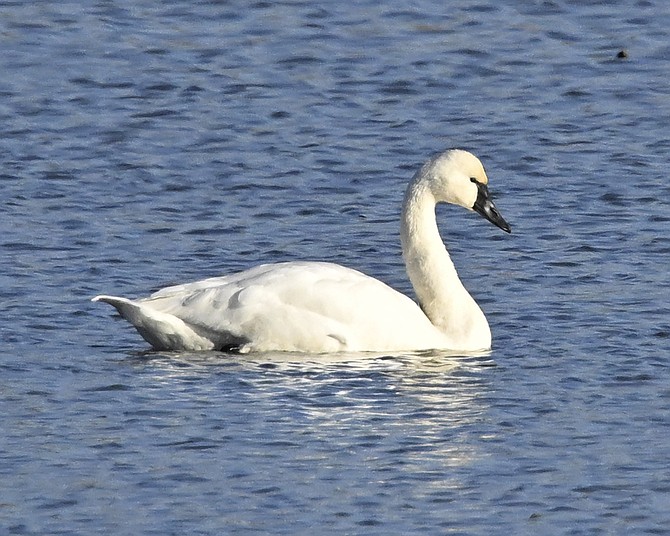 They traveled over 3,500 miles at 3,000 feet, 50 miles per hour and mostly at night. They “refueled” in the Upper U.S. Midwest and now these special visitors are here for the winter. Over 300 tundra swans have gathered along the Potomac River shoreline, especially concentrated in the Great Marsh of Mason Neck State Park.

On Dec. 4, Dr. Tom Wood and Tom Blackburn unreeled a plethora of tundra swan facts to 70 people at a meeting sponsored by the Friends of Mason Neck State Park at Gunston Hall. Dr. Wood is a professor of conservation biology at George Mason University. Blackburn is the past president of the Audubon Society of Northern Virginia and on the Board of Directors of the Friends of Mason Neck State Park.

These elegant, 13- to 20-pound birds, Cygnus columbianus, leave their Arctic breeding grounds and arrive on Mason Neck’s waters around Nov. 15 every year. Around 200 to 400 stay until mid-March and then fly back to the Arctic and northern Canada to breed. Each year, most of the swans return to the wintering ground of their previous year, Blackburn said. 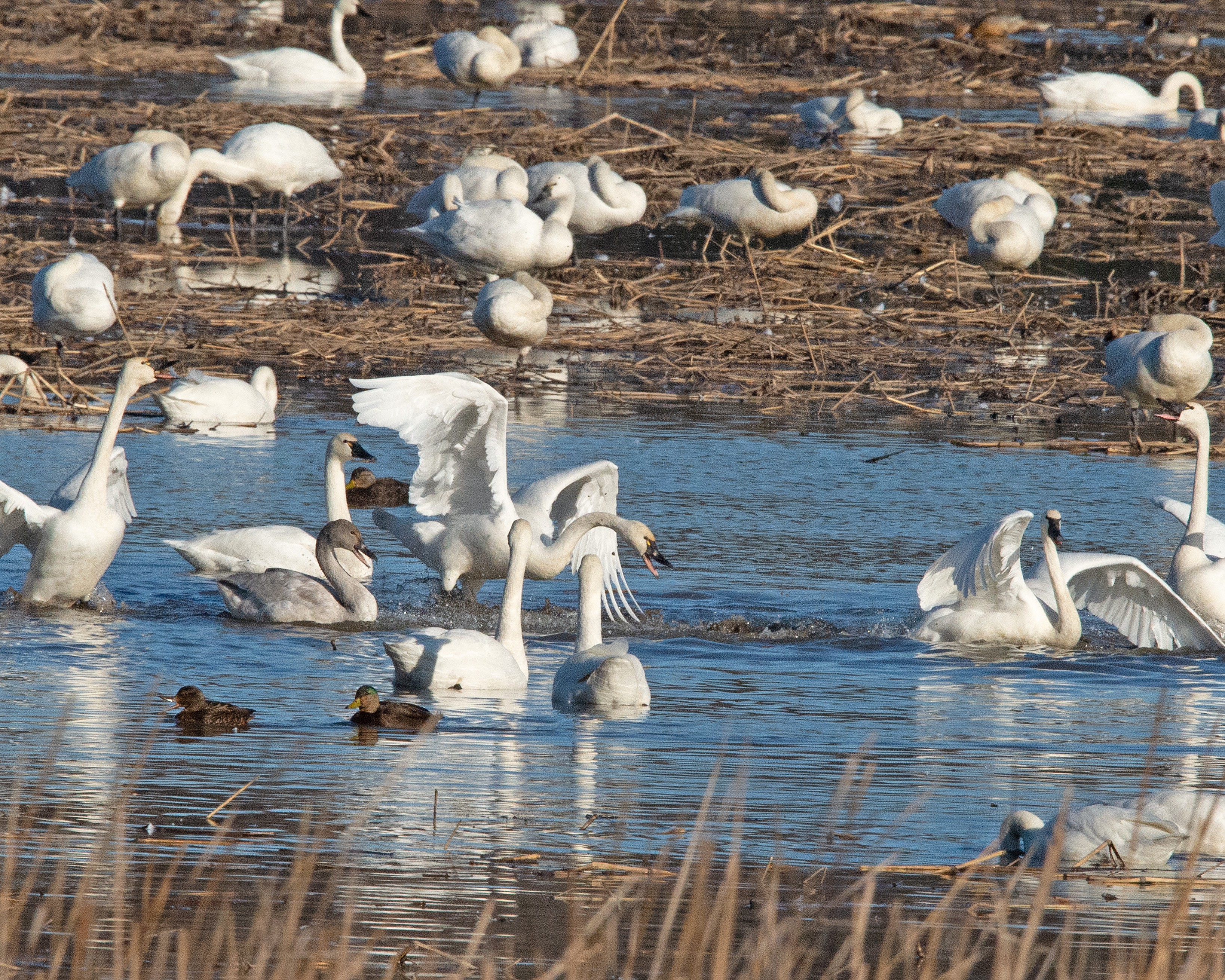 Tundra swans can live up to 20 or 25 years. Meriwether Lewis, called them “whistling swans,” said Wood because when they fly, their wings make a whistling sound. Lewis is known primarily for his 1804-1805 expedition to the newly-acquired upper U.S. Midwest with William Clark.

These almost pure white waterfowl are about 48 inches in length and have a 66-inch wingspan. They have black legs and feet and a boldly black bill with a yellow spot at the bill’s base. Juvenile birds have a gray tinge, said Wood. Some may have a “dirty” head and neck because of tannin in the water, he added. Tannin is a natural byproduct of decaying vegetation.

Tundra swans are very social animals,” Wood told the group. “They talk to each other a lot.” David Sibley wrote in The Sibley Guide to Birds, their call is “a melancholy, clear, singing klooo or kwooo with hooting or barking quality. Distant flock sounds like baying hounds, rather gooselike; resting flock gives gentle, musical murmuring, immature calls wheezier, becoming adultlike by second year.”

Native Americans, like the Cherokee Nation, revered tundra swans, explained Wood. “The Cherokees had a matriarchal culture and wearing swan feathers was an honor reserved for matriarchal leaders,” he explained.

Tundra swans have what Blackburn called a “loose sequential alliance,” elaborating, “They ‘date’ for two to three years and then establish a permanent bond for life,” he said.

The two speakers showed slides of the Northern Canada and Alaska breeding grounds, including the Mackenzie River Delta, and explained that a pair establishes a breeding territory of 250 acres and builds a nest of Arctic vegetation. The female lays three to five eggs which hatch in around 30 days. Both male and female incubate the eggs. After the young hatch, the adults molt or lose their feathers for around 20 days and the young cannot fly for 65 days, so the adults and juveniles are very vulnerable to predators. This phenomenon may be the origin of the term, “sitting duck,” noted Wood.

In the Arctic, adult tundra swans, their young and their eggs face risks from foxes, weasels, wolves and bears, as well as common ravens, parasitic jaegers and golden eagles. Up to 30 percent of nests have partial or total loss from predation, Wood told attendees.

In the Potomac River, these birds feed on plant matter, largely submerged aquatic vegetation, including roots, rhizomes and stems, said Wood. In other Chesapeake Bay areas, they also feed on clams. Many observers delight in their elegant profiles contrasted with the water, but at other times, people only see their upended, white feathered butts because like dabbling ducks, with their long necks, they reach down to feed on the submerged vegetation, up to three feet deep.

There are around 170,000 tundra swans in North America. Unlike many bird species whose populations are declining, the overall tundra swan population is stable, said Blackburn.

Virginia allows hunting of tundra swans from Nov. 16 to Jan. 31 with a permit “in all counties and portions of counties lying east of I-95 and south of the Prince William/Stafford County line in Chopawamsic Creek at Quantico Marine Corps Base,” according to the Virginia Department of Wildlife Resources website.

One enthusiast, Mount Vernonite Deborah Hammer, remarked, “We are so fortunate to have tundra swans that spend part of the year in our area and I wanted to know more about them. The presenters were a wealth of information and very engaging. I learned so much about tundra swan migration, communication, behaviors, diet and lifespan.”

“The one thing that’s predictable about wildlife is that it’s unpredictable,” Streufert quipped.