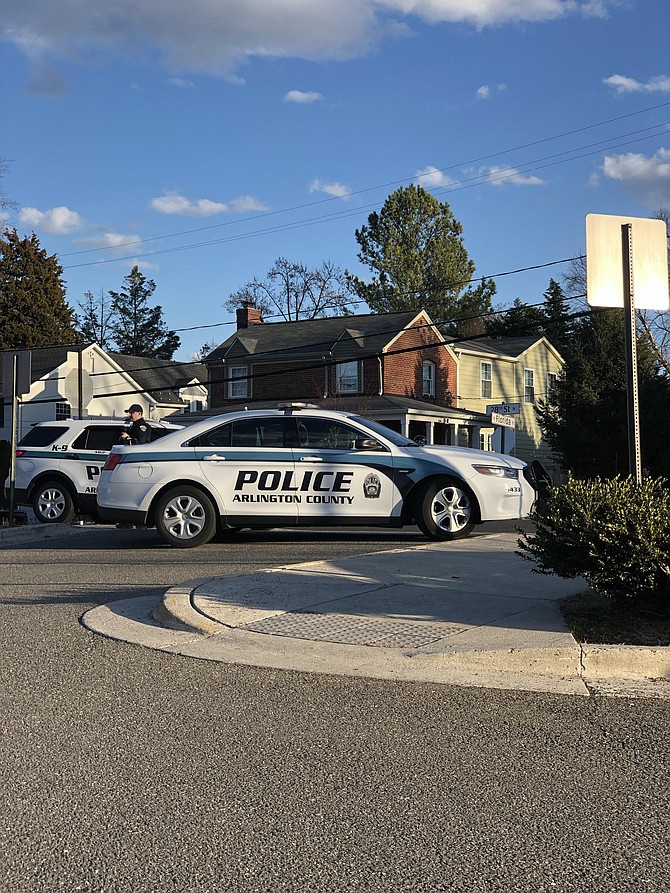 Patrol cars blocked all the exits from Yorktown High and several streets adjoining the school’s campus for more than 3 hours on Feb. 10, because the main office received an anonymous call from the suspect who claimed to be a student, making threats to ‘shoot up’ the school.

At 1:32 p.m. on February 10, ten women swimming laps at the Yorktown High School pool were told by an anxious looking lifeguard to get out of the pool quickly, hunker down in the locker room and await further instructions. Two thousand students were in class or on their way to class as they were also pulled into classrooms and locked down. There was an immediate sense that this was not a drill. 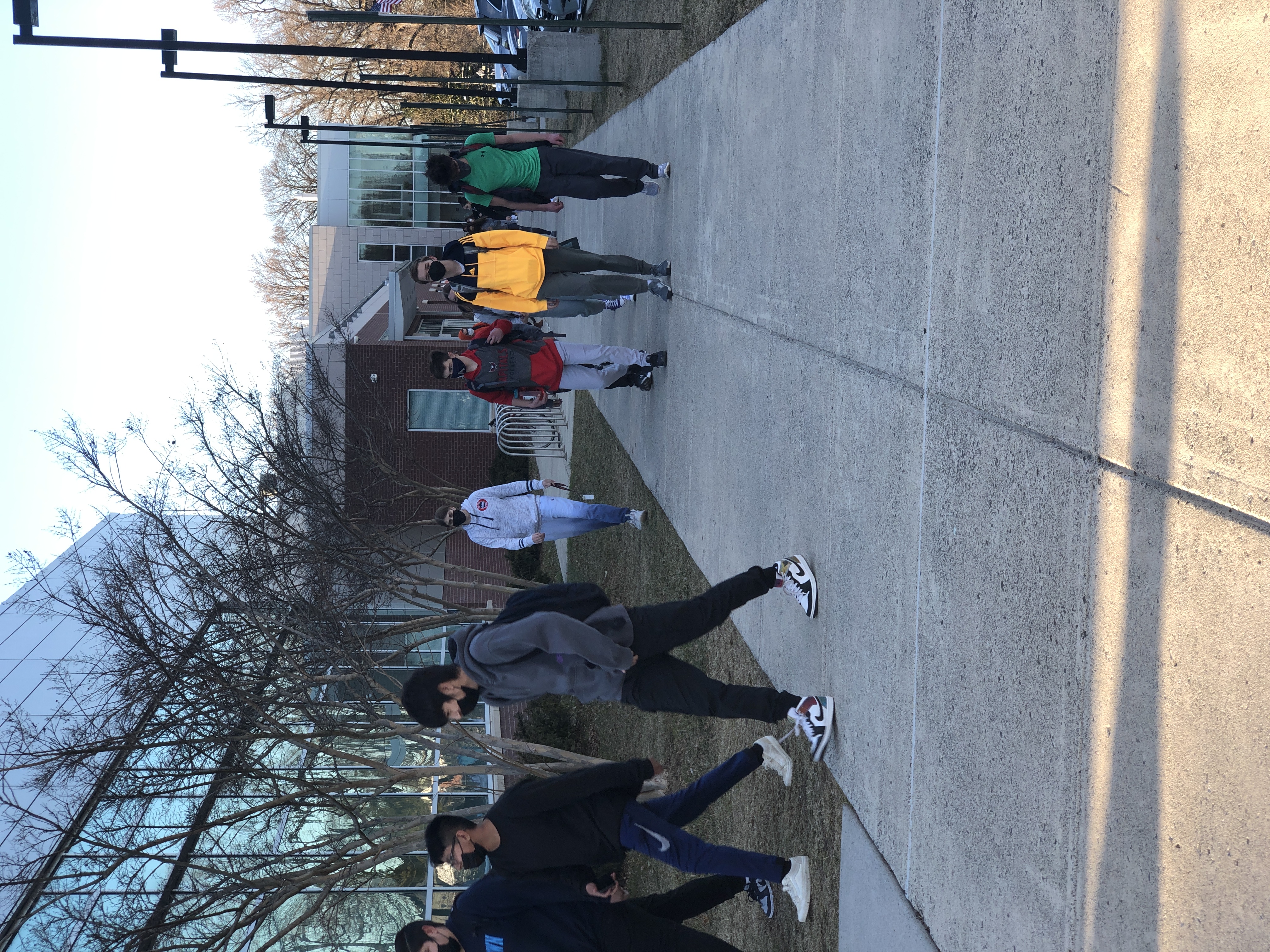 Students and teachers were finally let out of the Yorktown school building on Feb. 10, holding their hands in the air until they had cleared the area and went to a “safe area” where they would be transported to another “safe site.”

One teacher is still asking herself whether she did the right thing by not unlocking the door to her classroom when one student, arriving late, knocked to come in. She had practiced the drill: quickly pull kids in, lock the door, and don’t open it. Should she risk the lives of the 20 students in class? Or save one student who was out in the open? Another teacher was overheard as she left the building saying when she went to lock the door, it wouldn’t lock.

If you’ve never been locked down in a school because of a shooter or bomb threat, it means you are locked IN. For hours. And there is plenty of time to think. In at least some parts of the school, there was no wifi or cell phone coverage, and in a society where twitter and texts constantly update, it was like being at the Superbowl and no one will tell you the score. Scary rumors were flying — it was a student who had tried to commit suicide, a student who had a gun in his locker - and there was no certainty the knock on the door was not threatening.

None of the rumors were true, of course, and the threat — that an armed student had two hostages in a bathroom — turned out to be false. Arlington Public Schools Director of Communications Frank Bellavia, said any threat to a school is treated the same way, whether it is a bomb threat, a hostage threat or a shooter.

The Arlington County Police Department (ACPD) and APS work closely on a threat “SOP” (Standard Operating Procedure). That SOP does not include locking down cell and wifi networks, but where you are located in the school can make a big difference in terms of access to the network.

Police responded quickly. The threat came in at 1:26 p.m. and lockdown was at 1:32 for the swimmers. Ashley Savage, ACPD Public Information Officer, said the response to a threat is tactical in nature and taken very seriously.

“We regularly train for these incidents;  we implement a response based on what the threat is and we don’t share a lot of details with the public.” The police procedure, even the number of police on the scene, is proprietary and kept confidential because the responders hope to hold the advantage in the situation. But there were a lot of police, and they were heavily equipped.

“In this case, we used assets from across the police department to respond at Yorktown, including the SWAT team,”  Savage said. Savage could not provide more on the suspect who phoned in the threat because it is an ongoing investigation. The ACPD does believe the suspect who phoned in the threat did so from out of state, a fact they were able to determine in the conversation he had with police officials. “The safety of all concerned is our priority,” said Savage.

She highlighted  a video on the ACPD website which explains how the public can prepare for events like a lockdown: how to respond to an active shooter https://vimeo.com/473800825/2dcffde3d5. Additionally, Arlington’s Public Safety Communications and Emergency Management officers a Be the Help: Until Help Arrives course. https://www.arlingtonva.us/Government/Programs/Emergency/UHA

One of the areas of concern for some of those who experienced the lockdown was the inability to call for help in the event of a crisis in the lockdown unrelated to the threat. There was no radio on the one APS aquatics staff in the locker room, and no ability to call or signal.  One woman who was a teacher in a different school suggested a button that could be activated in an emergency was available in some schools. If there were a heart attack or an injury, the fact could be signaled. The inability to communicate was so stark that when the sound of the intercom clicking came on, they wondered if it was a message in morse code.

Generally, as the lockdown came to an end, the school officials, teachers, students, and pool personnel were impressed with the reaction of everyone, reflective of how it went in their particular area of lockdown, and anxious to get home, which wasn’t possible even after the all-clear because of the logistics of moving students to a safe site.

In the locker room, ten women shared recipes, paced, shared their own personal stories and expertise, meditated and were grateful they hadn’t left the oven on. They agreed that if you have to be locked down in a high school because a shooter may be somewhere in the building, the girls locker room is not the worst place to be. There is water, there is a toilet, there is a shower, and there are no windows and there were other women to chat with. But there were also comments like, “If we had to hide from “him”, I guess there are at least places to hide for a minute or two here.”

And leaving the building with hands up in the air, as instructed, still not entirely sure what had happened, the gravity of a school threat, and the impressive response of the school and police, was not lost on anyone.

Arlington County Police Department continues to investigate a telephone threat to Yorktown High School. At approximately 1:26 p.m. on Feb. 10, police were dispatched to the 5200 block of Yorktown Boulevard for the report of a threat. The reporting party advised dispatch that the Main Office had received an anonymous call from a suspect who claimed to be a student and who was making threats to ‘shoot up’ the school.

The school was placed on lockdown as police responded to investigate the credibility of the threat.

Upon arrival, officers made telephone contact with the suspect who reported he was armed, had taken two hostages inside a bathroom in the school and was making threats to harm them. A perimeter was established and officers searched the school’s bathrooms and found no evidence of the suspect’s claims. Officers then completed a cautionary search of the school and evacuated students who were transported by bus to a nearby location for parent reunification. No injuries were reported and no evidence of a crime was located inside the school.

“Yesterday’s response highlights how seriously the Arlington County Police Department takes reports of potential violence within our community,” said Chief Andy Penn. “I commend our officers and public safety partners on their immediate and coordinated response to ensure the safety of our community. I recognize incidents involving threats have significant impacts on the wellbeing of all involved. I want to thank the Yorktown High School students, staff, parents and community members for their patience and support during yesterday’s incident. We will continue to work collaboratively with Arlington Public Schools to ensure the safety of students and staff.”

During the course of the investigation, officers determined the call originated from out of state and there was no credible threat to the safety and security of the students or staff. This remains an active criminal investigation and anyone with information that could assist with the investigation is asked to contact the Arlington County Police Department’s Tip Line at 703-228-4180 or ACPDTipline@arlingtonva.us. Information may also be reported anonymously through the Arlington County Crime Solvers hotline at 1-866-411-TIPS (8477)