‘The Improvements Are Welcome – Keep them Coming’
Votes

‘The Improvements Are Welcome – Keep them Coming’ 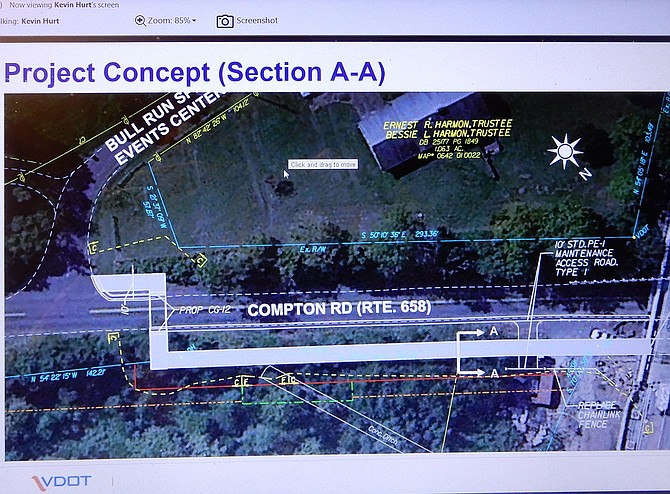 One of the trail sections to be constructed.

Fairfax County and VDOT are working together to build the 10-foot-wide Compton Road Shared-Use Path in Centreville. One section will go along northbound Compton Road from the Bull Run Special Events Center Access Road to just south of the I-66 bridge. The other section will go from just north of the I-66 bridge to a connection with the existing Cub Run Stream Valley Trail. 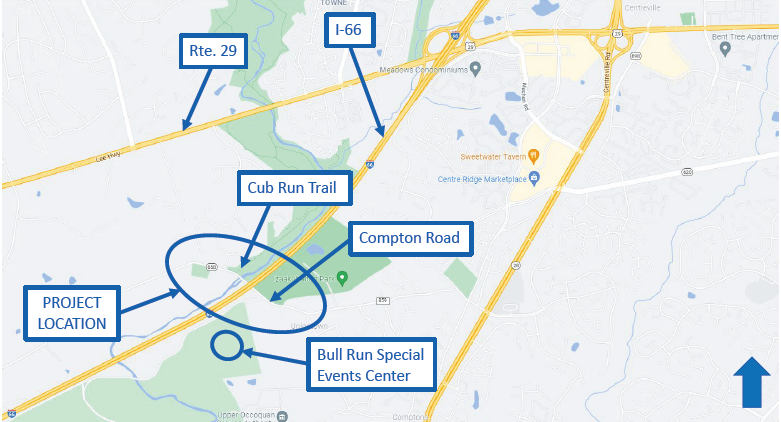 The project also includes widening the Compton Road bridge over Cub Run to accommodate the new, shared-use path. The portion of the path under the I-66 bridge is being constructed separately as part of the Transform 66 Outside the Beltway Project. VDOT will construct the parts of the path north and south of the bridge, along the east side of Compton Road.

The path is intended to improve mobility, travel choices and safety for pedestrians and bicyclists. It will also provide a connection to surrounding, existing and/or future trails. The segment south of I-66 will be approximately 430 feet long. The segment north of I-66 will be about 380 feet long and includes items that will add to the construction duration – the Compton Road bridge widening, plus relocation of a waterline for the project fill slopes.

Area residents recently learned about the plans during a VDOT, virtual, public-information meeting. VDOT Consultant Project Manager Kevin Hurt presented the details. He said the bridge widening will be in the final portion to be completed and that handrails and guardrails will be included.

The project is financed with a combination of federal, state and local funds. VDOT Project Manager Jenny Ha went through the path’s estimated schedule and costs. She said a design public hearing will be held this summer, with design approval anticipated by sometime in late spring.

Right-of-way acquisition and utility relocation is expected to begin, the end of this year and continue into 2023. If all goes well, construction should start by spring 2024 and last approximately 20 months.

Total project cost is estimated at $7.9 million. Of that amount, preliminary engineering is earmarked at $1.5 million; right-of-way acquisition and utility relocation, $1.1 million; and construction, $5.3 million. Some $4.5 million has already been allocated, with another $3.4 million pending.

During the meeting’s question-and-answer period, resident Mark Scheffler asked what bike-path improvements are planned in Bull Run Regional Park, itself. But FCDOT Project Coordinator Dan Stevens replied, “No other improvements in the park are planned as part of this project.”

FCDOT Director Tom Biesiadny explained that “The purpose of the I-66 trail is to get to the park and connect to the road that parallels I-66 on the south side.”

Scheffler asked if a bike-repair station would be part of the project and was again told no. “What safety features are proposed for the entrance to Bull Run Regional Park at Compton Road?” asked John Bell. Hurt said there’ll be a painted crosswalk on Compton, plus signage, and the sight distance will be checked to make sure it’s adequate.

Meanwhile, James Zellner stressed that “There’s much more foot traffic from the south because there are more houses there.”

“We know there’s a need for a trail south of the Bull Run Events Center Drive,” responded Biesiadny. “But this project is to connect to the I-66 trails and the existing trails to the north.”

“The entrance to Bull Run Park is where the traffic is moving quickly,” said Zellner. “[So] the improvements are welcome – keep them coming.”

For more information about this project, go to https://www.virginiadot.org/ComptonRoad.